This Is How We Win: Growing Our Power in Cities – Next City

This Is How We Win: Growing Our Power in Cities 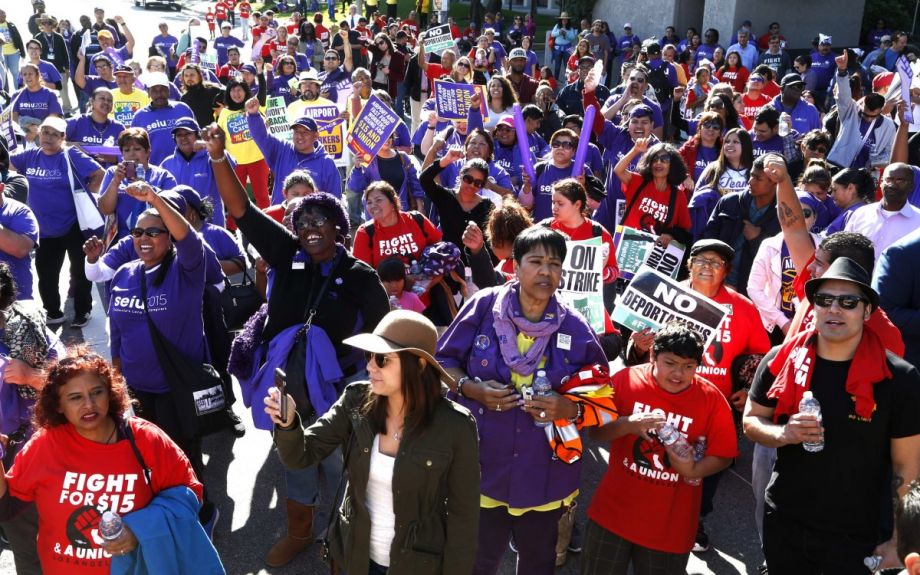 “You should come work for EBASE [East Bay Alliance for a Sustainable Economy],” my friend Kirsten said. “They’re doing some of the most innovative work around economic development and worker organizing in the country, bringing unions and community members together to build real power.” It sounded like a challenge, and an opportunity too important to pass up.

Fast-forward 12 years, and I am transitioning out of a life-changing role as executive director of the national network that EBASE is a part of, the Partnership for Working Families.

I knew one important thing back when I started at EBASE: there is a different way to build our cities — one that’s driven by community members and that creates more equity and restores the wealth and resources that have historically been taken from people of color and marginalized communities. What I didn’t know was that this model of organizing presents one of our best and only hopes for growing the current resistance.

Since the 2016 election, we are fending off constant attacks on immigrants and poor people of color, the gutting of our safety net and public services, and seeing massive corporate giveaways at the expense of vulnerable communities. Our opportunity to push back starts at the local level, where we can grow a base of organized people, build long-term power, and pass policies that level the playing field and protect the lives and well-being of our residents.

As I move into my next chapter of local public service, here are some of the major lessons I’m taking with me:

City-level wins help change what is politically possible
I saw this with campaigns to raise the minimum wage, city by city. It began with EBASE’s Emeryville hotel living wage in 2005, to Working Partnership’s minimum wage in San Jose in 2012, then a string of victories in 2014 including EBASE’s minimum wage campaign in Oakland. With each victory, expectations and momentum grew. By 2016, our movement raised the California minimum wage to $15. These victories served as a powerful reminder that when we stand up together, we can change even the most entrenched views and give hope to those left behind by a rigged economy. Last year, as President Trump pushed his border wall plan, our network drew attention to the contractors and Wall Street investors seeking to profit off the wall. Our organizing propelled dozens of cities to pass resolutions boycotting contractors who are bidding on the border wall. The same momentum is building with fair hire or “ban the box,” policies, which prohibit employers from asking job applicants if they’ve been convicted of a felony; as of now, 32 states and more than 150 cities have adopted these policies.

Restoring trust in government requires a change in how we deliver city services
Ensuring equity in the delivery of city services is one of the most powerful steps elected and appointed leaders can take to rebuild trust in government, improve communities, and make the case for increased public investment. Across the country, organizations in the Partnership for Working Families network are declaring that “WE make this city.” It’s both a rallying cry for investment in the public infrastructure that our communities need, and a reaction to the outsized role corporations play in shaping the direction and future of our cities.

We can’t do it alone
The solution is not only electing officials who represent our values — that is absolutely necessary, but it only works if they are held accountable by an organized base of voters and constituents who are building permanent power through organizations. When cities succeed in instituting people-centered policies, it is because they are responding to outside demands for fairness and opportunity. The future I’m working towards is a vibrant democracy where everyone has a real voice, where there’s deep organizing, combined with city leaders who view their roles as being both in service of and accountable to the communities they represent. With those ingredients in place, we can leverage the powers of cities to help us all thrive — the powers that our network details in our report “Unmasking the Hidden Powers of Cities.”

We need a leadership pipeline for women and people of color, and we can build it
One of the things I’m most proud of from my time at the Partnership is its evolution into a majority women of color-led organization. It doesn’t happen by accident — it has taken intentional work and commitment, including things like developing a leaders of color cohort on our Board of Directors and embedding a racial justice analysis into all of our campaigns and operations. With a staff and board that reflect the communities we organize and advocate with, we can bring people to the table to be a part of the decisions that affect all of our lives. Our network’s pipeline is not only building leadership within our organizations, but also in our communities as appointed and elected local and state leaders, and government staff, playing critical roles to advance innovative policy.

I’m leaving my role at the Partnership for Working Families with a vision of a world where taxpayer dollars are used for the public good, which means no corporations or sports franchises coming into towns without paying for the infrastructure we need and actively working to prevent displacement. I’m envisioning a world where we take back power from corporate-controlled state legislatures and put it into the hands of low-income working people and families of color. I’m looking forward to seeing the next phase of organizing by the Partnership and our 19 affiliate organizations. Together with our allies, this organizing is how we will grow our power from our cities outwards to our states and across the country.

EDITOR’S NOTE: The author of this op-ed is currently running in the general election for Oakland City Council District 2.