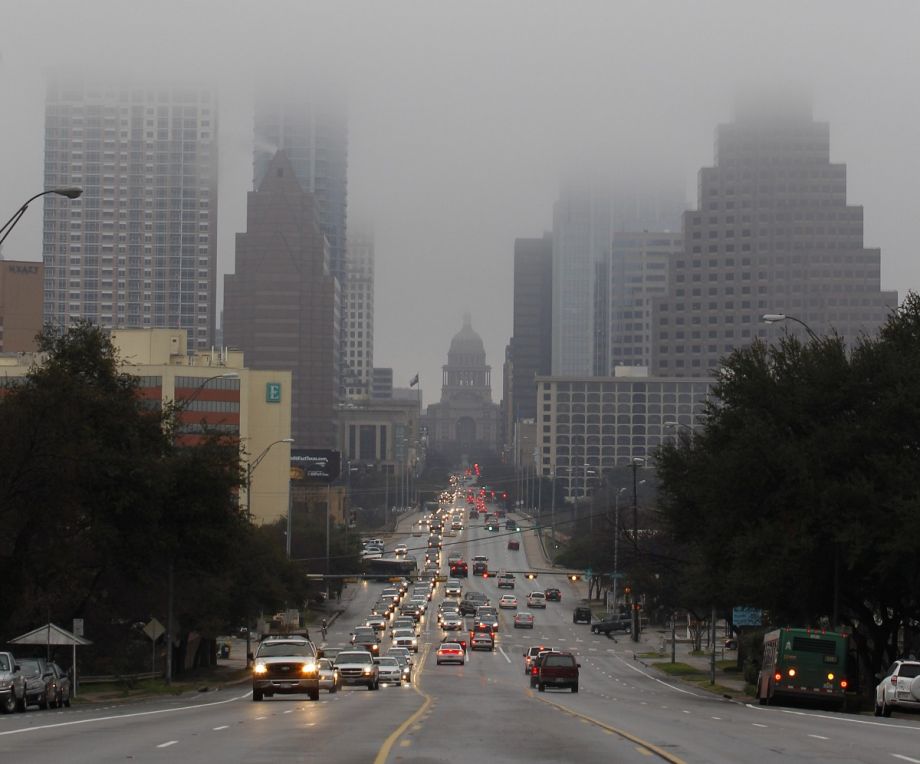 The Texas Capitol and downtown buildings fade into the fog in Austin, Texas. (AP Photo/Eric Gay)

A new federal tax break encouraging investment in poor communities has some Austin officials and residents worried about potential development that could price out the very residents it’s claiming to help.

Mark Rogers, who builds affordable housing through Guadalupe Neighborhood Development Corporation, says some residents “are sick and tired of all the investment … making things less affordable.”

Now, more investment could be pouring into the city.

Tucked into last year’s tax overhaul bill is a provision that offers capital gains tax breaks to investors in exchange for investing in poor neighborhoods across the United States. Under this program, governors designated a limited number of low-income census tracts in their states as “opportunity zones,” where investments eligible for tax incentives would take place. Although the idea for the program had been floating around for several years, the tax break’s inclusion in the tax reform bill was a surprise to many, igniting a scramble to understand what it is and how would it be regulated by various agencies including the Internal Revenue Service.

Texas Governor Greg Abbott submitted and designated 628 census tracts in 145 counties as opportunity zones, according to a city report. Twenty-one of those tracts are in Austin, including four the city submitted. Public and private entities could provide nominations to the governor.

The program has not yet provided guidelines requiring investors to consult and work with local officials and residents, the city says. That worries city leaders, who, despite concerns, nominated the four Austin census tracts to be considered as opportunity zones.

“[The program] could lead to supporting businesses that aren’t really assets in our community,” says Christine Maguire, the city’s redevelopment division manager. “Often, it’s not a lack of capital. It’s the lack of the right kinds of capital in fast-growing areas like Austin.”

In Austin, a city that has twice been deemed by Forbes as “America’s Fastest Growing City,” hundreds of residents have reportedly faced displacement threats because of redevelopment plans. As Next City previously reported, Austin recently became part of the initial cohort of the “All-In-Cities Anti-Displacement Network.”

In a June 2018 letter to the Internal Revenue Service, the city urged the agency to craft regulations requiring investors to work with local stakeholders.

“As it stands, the City fears that these local stakeholders will not necessarily have an opportunity to work with Opportunity Fund investors, fail to meet local needs and priorities and could possibly exacerbate existing problems or impose hardship on the communities the legislation is intended to help,” the letter reads.

The letter also notes how the city’s recent growth has disproportionately impacted low-and-moderate-income people, “the very people Opportunity Zones are meant to help.”

Maguire says the city is hopeful that national advocates will be able to positively influence the way the new program is handled.

“Those folks that want to make money will feel like they’re doing a good thing by eliminating vacant land … and bringing in better-paying jobs, and the people who are there will get washed away in the tidal wave,” Rogers says.

To Rogers, the best solution is simply not to have opportunity zones in Austin.

Such development projects, “need to be done with the existing population,” he says. “I do not see these opportunity zones doing that.”