The Tent City and the Olympic Village – Next City

The Tent City and the Olympic Village 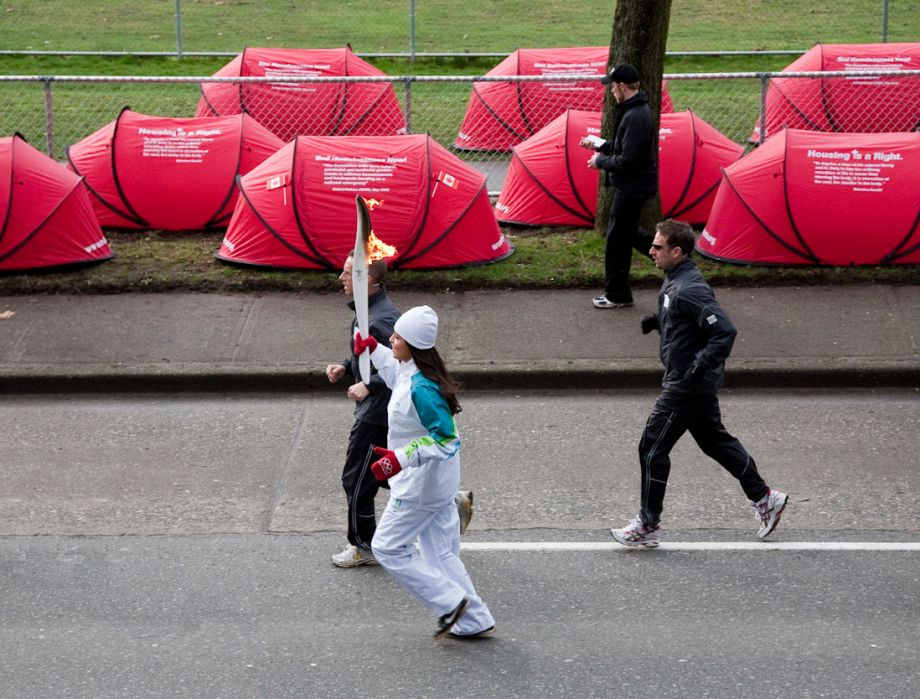 With all eyes focused on Vancouver for the Olympic Games, leaders at the Pivot Legal Society, a local advocacy group, decided to take the opportunity to attract attention to the city’s burgeoning homelessness population. At the same time, with the city’s shelters at capacity, the group hoped to provide protection from the elements for those among Vancouver’s estimated 2,800 homeless who have been forced to sleep outside. So about a week ago, in time to meet the relay of the Olympic torch, they began distributing red tents to the homeless, emblazoned with the Canadian flag and slogans like “housing is a human right.”

Presently, the campaign has some 500 tents; about 25 have already been pitched in a tent-city on Hastings Street, five blocks from the Olympic Village. (Tents can be sponsored for $100 apiece; $10,000 in private donations has already been raised.) Am Johal, spokesperson for the campaign, adds that others have been set up nearby to where crowds lined up to greet members of the Colbert Report, which taped at Science World (the show is a sponsor of the U.S. speed-skating team). Earlier this week, with the permission of local authorities and the police, campaigners hung a 45-foot banner declaring HOMES FOR ALL from the city’s Cambie Street Bridge. The group has also planned a campout for tonight, Friday, says John Richardson, executive director of Pivot Legal Society. City officials have designated the location, about a block from the Olympic Village, an area where protesters can assemble without fear of arrest. Another demonstration is planned Saturday, which will wind up at the heart of downtown.

Inspired by a similar campaign in Paris that launched in 2006, the group, says Johal, hopes to make the connection between the “huge sums of money” that went into developing infrastructure for the Olympic Village and street homelessness in British Columbia. The homeless population in B.C. stands between 10,500 and 15,000, representing a 300 percent increase since 2003, when Vancouver secured its bid for the Games. The Campaign also advocates a national housing scheme; according to Richardson, homelessness is a national problem that should be dealt with at the federal level, rather than by each city or province. And the group might get its wish; in mid-March, the government will vote on Bill C 304, which proposes a national housing strategy akin to the one that ended in 1993, which had devoted government funds toward construction of affordable housing.

The tents are legal, according to a 2009 Supreme Court ruling stating that, given the Canadian Charter’s guarantee of the right to life, homeless people can erect temporary shelter if homeless shelters are full. Still, some local officials weren’t pleased. “We’re not supportive (of the campaign),” Councilman Kerry Jang told Metro News Vancouver, prior to the Games. “We’re worried about the health and safety of the homeless.” Still, that the Red Tent campaign has attempted to legally operate stands in contrast to other local demonstrations against the Olympics, including last Saturday’s “Heart Attack March,” in which protestors smashed and vandalized windows displaying Canadian Olympic gear. (The protest resulted in multiple arrests.) Richardson says that his group is committed to nonviolence.

Even once the Games are over and the athletes and tourists go home, the Red Tent campaign will continue. Although building the Olympic Village “amplified” the city’s already-growing problem of gentrification, Johal says that homelessness is a growing national problem, with some 300,000 people now on Canada’s streets. To that end, red tent campaigns are also slated for Montreal, Ottawa, and Toronto. Visitors can follow the campaign’s progress at redtents.org.