The Student Voice Is Back Where It Belongs in Philadelphia 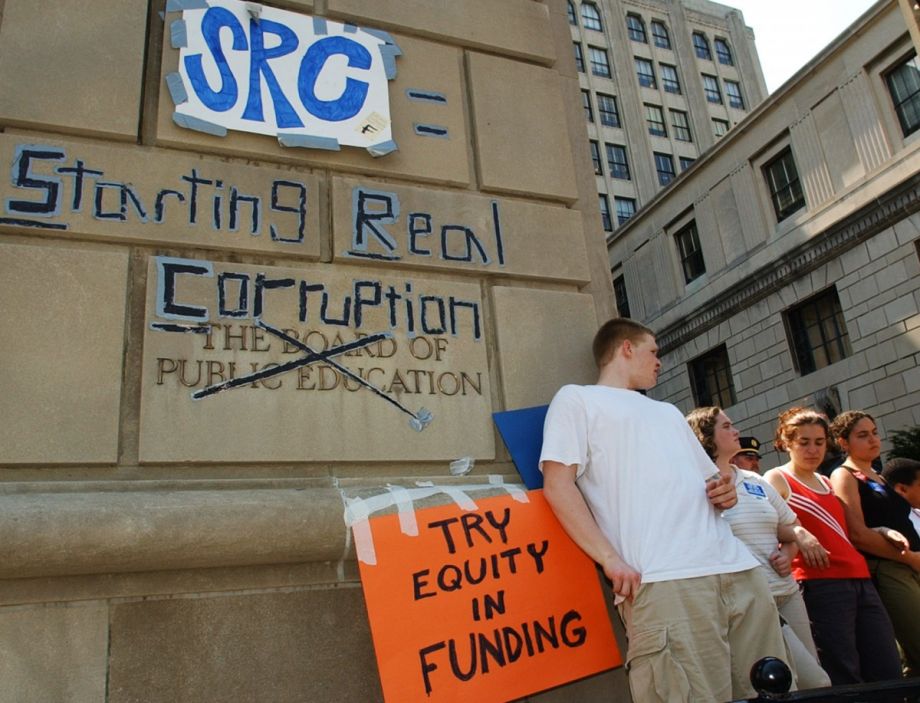 Despite losing official representation in their school system's governance seventeen years ago, Philly students never stopped speaking out. Here, about a dozen students lock arms outside Philadelphia's school administration building Wednesday, April 17, 2002, forming a human chain and refusing to allow anyone inside. The Philadelphia School Reform Commission, at the time set to announce which companies and nonprofit groups will be given control of some 75 schools in the district, decided to postpone the meeting for two hours and move it to another building several blocks away rather than make a forced entry. (AP Photo/Brad C. Bower)

Philadelphia’s Home Rule Charter makes it perfectly clear: “There shall also be a non-voting student advisory member of the Board of Education and alternate appointed by the Board from among the students enrolled in the Philadelphia public schools.”

And yet for the last seventeen years, while Philadelphia’s public schools were governed by the state-controlled School Reform Commission, students have had no formal representation in the school system’s governance. With the restoration of local control, that’s about to change. Philadelphia’s nine-member Board of Education held its first post-School Reform Commission meeting in July. And in September, it introduced its two new student members: Julia Frank and Alfredo Praticò, both 17-year-old high school seniors selected from more than 50 applicants.

Though they won’t have a vote on official Board of Education business, the students say it’s their goal to keep the Board’s work grounded in the interests and concerns of the student body.

“The perspective of the student is, we see what works and we see what doesn’t work,” says Praticò. “And we’re there to advocate for the things that do work.”

Praticò, who says he plans to study economics or political science in college, and Frank, who is considering biochemistry, intend to act as intermediaries between students and the board. They say they’re developing a schedule of in-person meetings with students at various schools, and working to establish online forums for students to air grievances and share ideas.

“The general plan is to hear ideas from students and think about the best way we can serve them and implement them,” Frank says.

“It’s still kind of in the draft phase,” says Praticò.

Philadelphia School Board President Joyce Wilkerson says that under the School Reform Commission — of which she was also a member — students were able to testify at public meetings, which gave them some voice in the process. But having student representatives on the board will enable board members to “penetrate deeper and get a broader view of what their concerns are.”

“It’s going to be interesting to see,” Wilkerson says. “I think they’ll probably be using media in a way that we don’t, because we’re old fuddy-duddies. I’m excited about it. We’re not trying to micromanage them.”

Wilkerson says the applicants were screened by a panel that included students, the Mayor’s Office of Education, the Superintendent’s office, and others. To be eligible to apply, students had to be in their junior or senior year of high school, maintain at least a 2.5 GPA, and provide recommendations from a teacher or principal, among other qualifications, Wilkerson says. She believes the restoration of student voices to the District’s governing body is part of a broader push to establish public trust.

“I think one of the huge downsides of the School Reform Commission was that the district became so isolated form the constituents it served,” Wilkerson says. “People became very focused on their child — if they could get their child in an advantageous situation. There wasn’t that broader community of concern for public education in Philadelphia. I see this as another step to reconnecting with the community that we serve.”

In 2014, SoundOut, a nonprofit group focused on student involvement in school affairs, released a report showing that 25 states allow student representatives on district school boards, while 14 states specifically ban their involvement. Adam Fletcher, the founding director of SoundOut, says that young people benefit from being involved on school boards, and so do the organizations they’re serving.

“In turn, adults get a sense of effectiveness and a real sense of camaraderie and partnership with young people when they’re involved in decision-making,” Fletcher says. “So school boards basically become better for having these roles.”

Student representation on school boards falls on a spectrum of effectiveness, Fletcher says. Students are sometimes included for mere tokenism purposes, or they play the role of informants or consultants to the board, or in some cases, they have had actual voting positions.

Lately, school boards have been trending toward including more student voice in their work, Fletcher says.

“What’s happening in Philly right now is super awesome,” he says. “[But] what Philly’s doing is actually catching up.”

The key question is whether student involvement actually helps school districts achieve better educational outcomes. Fletcher says there’s no concrete evidence that it does or does not. But the prospect of improving the educational environment — giving more students a better chance to achieve what they want to achieve — is the reason Frank and Praticò are willing to invest their time in their new roles.

“If we see that there are better ways that the School District could achieve that task, no doubt we are going to be talking about it,” Praticò says. “We are going to be bringing it up in meetings.”

Frank and Praticò say they’ll encourage students to continue attending public board meetings and testifying about their concerns. And they hope their presence on the board will help integrate those concerns more deeply into the district’s work.