The Role of Community Land Trusts After Hurricane Maria – Next City

The Role of Community Land Trusts After Hurricane Maria 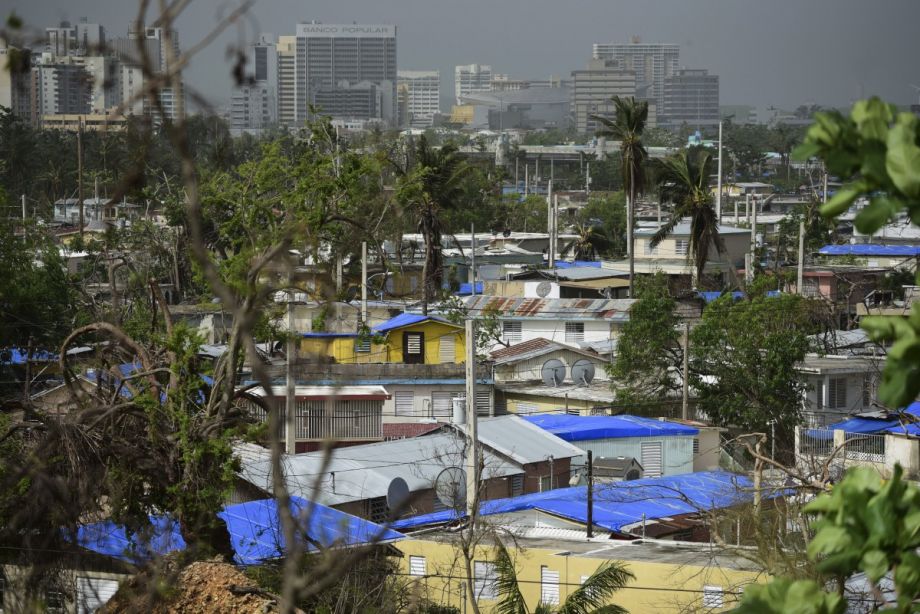 Lucy Cruz has lived all of her 58 years in Caño Martín Peña, an informal community centrally located in the Puerto Rico capital of San Juan. Eight distinct neighborhoods make up the community, clustered around a stream, a caño, that gives the area its name and identity.

Some 1,200 homes in Caño Martín Peña lost their roofs during Hurricane Maria, according to Cruz, who says that the community has worked collectively to gather supplies and rebuild those roofs. They have managed to rebuild 75 completely, but in many places, blue tarps keep out the elements, according to Cruz. Access to federal funds can make a substantial difference.

For working class areas of Puerto Rico, like Caño Martín Peña, it’s been a tough go of accessing those funds. FEMA, the Federal Emergency Management Agency, has strict requirements for emergency funding recipients to prove homeownership. Proving that in the aftermath of a Hurricane can be difficult.

“A lot of people [in Puerto Rico] have had problems because they don’t have any documents,” says Maria Hernandez, a law professor at the University of Puerto Rico, via email. “Or they had one, but it got wet or it got [lost in the flooding]. Or at some point, their grandparents had something written to occupy the land that they occupy, but now they can’t prove [ownership].”

Since the hurricane, Hernandez says she and other attorneys have gone to many communities, working to get sworn, notarized statements as proof of homeownership. “In those cases, FEMA would grant assistance to some but not others,” she says. “We don’t know what criteria they used.”

Hernandez says that means some people get disqualified for the assistance to which they have a right.

“We are really proud of what we have because to remove one person, you have to remove almost the entire community, and it’s not economically viable for the government,” Cruz says.

All that said, there has been some confusion among FEMA administrators working in Puerto Rico.

“Even with the community land trust, it hasn’t been easy for all the trust’s members or the people who live in the trust to get FEMA’s help,” Hernandez says. “People are making requests, complaining, and filing claims, but not everyone understands the model or these people’s right to be where they are.”

It’s not the first time Caño Martín Peña residents have had to fight for their collective ownership of the land beneath their feet. The community survived a government attempt to revoke its trust about a month after it was originally established in 2009. Community members like Cruz organized a campaign to ensure that whoever was elected mayor of San Juan and governor of Puerto Rico in 2012 would support their right to collectively-owned property.

FEMA responded to an inquiry from Next City and said that survivors of the hurricane who live in Caño Martín Peña who can prove home ownership may be eligible for disaster assistance. The agency said that if standard ownership documents are not available, it may accept a written statement as an alternative form of proof.

The time will come to turn from disaster relief to recovery and rebuilding the island’s economy. Some foresee community land trusts as having a key role to play in those efforts as well.

Cristina Miranda leads the board of directors for the Trust for the Development of Rio Piedras, in Puerto Rico. She believes that the community land trust model could benefit many areas. Her trust focuses on the Rio Piedras area’s community and economic development. Nearly 1,500 homes in the Rio Piedras area are abandoned. The trust prioritizes recovering abandoned properties to develop affordable housing, businesses, and non-profit organizations.

In late May, the Trust for the Development of Rio Piedras submitted comments to the Puerto Rico Department of Housing in relation to the department’s action plan for a federal community development block grant aimed at disaster recovery efforts. The comments criticized a long-standing tendency on the island to develop new, luxury buildings instead of rehabilitating existing structures. The action plan argues: “Densifying population in urban centers like Río Piedras has the multiple effects of increased use of public transit, strengthen locally owned small business and making more efficient governmental centers.”

The residents of Caño Martín Peña seem to already be fighting the fight against the potential for displacement by post-disaster redevelopment projects. After a few minutes on the phone, Cruz has to wrap it up and head to another meeting. “It’s with FEMA,” she says. “Because FEMA thinks it’s better to remove people from flood-prone areas and not to help us with this. It’s not right that we who built it get displaced from this community so that others can come live in the Caño.”