The Quest for High-Tech Solutions in New Mexico “Ghost City” 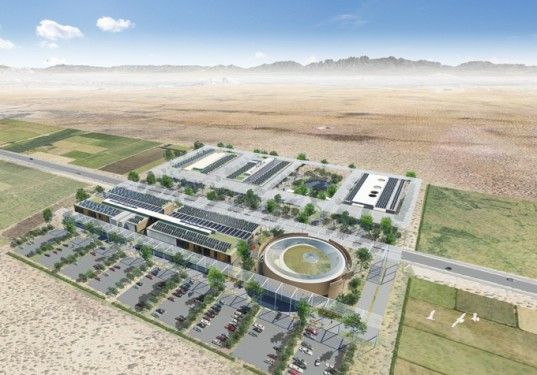 CITE be capable of housing 35,000 ostensible people across 400 acres. Credit: Center for Innovation, Testing and Evaluation

Remember those videos from the 1950s, depicting small towns set in the beautiful New Mexican desert, picturesque one minute and then vaporized the next by a nuclear blast? Well, New Mexico is about to play host to yet another built-for-science ghost town. But this time, it’s going high-tech.

Pegasus Global Holdings, a high-tech development corporation, has recently chosen Hobbs, N.M. as the site for its massive new $1 billion “unpopulated tech city” known as CITE, or Center for Innovation, Testing and Evaluation. Instead of being destroyed by a nuclear blast, the hope is that the city will give corporations, government laboratories and universities a venue to test technologies that aim to alleviate modern urban problems.

For instance, if a company wanted to prototype a driverless automobile, it could do so without the fear of a robotic car on the fritz meeting an unfortunate pedestrian. By voiding the city of people, said Pegasus senior managing director Bob Brumley, CITE will allow researchers to conduct experiments without harming or inconveniencing real, live people.

The CITE project is yet another example of the “smart city” movement which promises technology as cities’ next great savior. Led by corporations such as IBM and its Smarter City Initiative, the movement seeks to use analytics and supercomputing to dissect urban problems. Resulting information would be used to formulate a solution, making the city a better place, and of course, sell such a product drawing in hefty profits.

Some, however, are weary of this promise. In a piece for the New York Times last September, author (and Forefront contributor) Greg Lindsay questions the idea that a computer could accurately replicate the randomness and chaos of a human-filled city. Reached by phone, Lindsay said that he worries about the possibility that many will believe that all urban problems can be met with a technological solution.

Lindsay is also concerned with what he sees as the belief in the infallibility of the computer models used in projects like CITE, again emphasizing that cities are their people, and not their buildings and technologies. For Lindsay, there is a fear that municipalities will become over-reliant on “smart” systems and governance will lose its transparency and accountability.

Brumley countered that it’s the people themselves that demand services, and thus produce demand for the technologies that his CITE project will develop. To Brumley, the way cities operate today is as a “system of systems” that will necessitate new technologies. However, he agrees that technology should not and cannot be the ultimate solution.

Whatever side one takes, the project in New Mexico is astounding in sheer size and vision. Not only will the ghost town be capable of housing 35,000 ostensible people across 400 acres, it will also sit on top of a subterranean network of tunnels that will lead to the main laboratory and technology center just outside of the town.

Originally codenamed “sandbox” and playfully called the “vacant village,” CITE will be modeled after the real South Carolina town of Rock Hill, a typical mid-sized American city. This follows the idea that whatever gets tested in the ghost town ought to be useful to actual cities — say, cities with over 100 years’ worth of outdated electrical grids, water lines and decaying roads.