The Many Narratives of Growing Up With Central American Roots 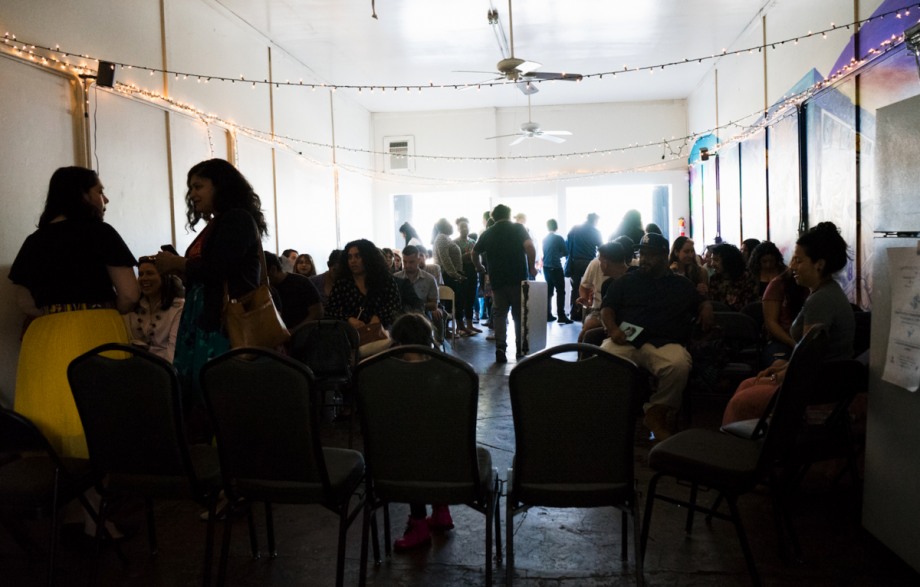 The community room at the Eastside Cafe in Los Angeles, where “Isthmus Roots: A Celebration of Central American Creativity & Storytelling” featured and celebrated Central American identities on May 26. (Photo by Felix F. Quintana)

Growing up in Los Angeles, Iliana Guevara would often feel conflicted about her Guatemalan-American identity.

People would always ask her where Guatemala was, or were simply confused she wasn’t Mexican like the majority of the Latinx immigrant population in L.A.

“After a while, nobody knew where [Guatemala] was and I kept saying, ‘Oh you know what, it’s better to say I’m Mexican.’ And so I became Mexican for a while,” says Guevara, a 30-year-old filmmaker, of her childhood.

On a recent weekend in L.A., it was a different story.

In El Sereno, a neighborhood that historically has been mostly Mexican, more than 100 people on Saturday, May 26, filled the narrow Eastside Cafe to hear young Central American musicians, artists, writers, and activists speak about how their identities shape their creative work and advocacy. It was so well-attended that people were out the door while the panel discussion took place.

To Guevara, this kind of gathering was unprecedented. “I didn’t know that I’m part of a diaspora,” she says.

In recent years, #CentralAmericanTwitter has emerged as an online space to fill the void of decades of invisibility. As President Donald Trump threatens the futures of Central Americans in and outside the U.S. through policy or by describing deported immigrants as “animals,” this online space is now starting to take physical shape.

It’s the children of Central American immigrants who are finding places to break through the Mexican-dominated landscape, lift up their own identities, and challenge the mainstream idea of what it means to be Central American.

To Victor Interiano, who helped plan the May 26 event and whose parents emigrated from El Salvador to Los Angeles in the mid-1970s, boosting each others’ unique Central American identities is crucial.

“Our parents did not have this space because they were on survival mode, continuously working trying to create avenues for us to have a better life,” he says. “This is advocacy — self-advocacy.”

In the public eye

Central American migration to the United States has been the subject of recent media attention as a large caravan, mostly of Honduran migrants fleeing political unrest and violence, crossed Mexico this spring in their journey for asylum in the U.S. In recent years, an influx of unaccompanied minors from Central America have also crossed the border to escape violence.

Central America, the southernmost region of North America that lies between Mexico and South America, is made up of seven countries: Belize, Costa Rica, Nicaragua, Panama, El Salvador, Guatemala, and Honduras.

Immigrants from these countries arrived in the U.S. and L.A. during the 1980s, escaping civil wars, economic instability, and economic hardship, according to the Migration Policy Institute. Many have pondered the role the U.S. played in the instability of these countries by supporting military dictatorships in Guatemala, El Salvador and right-wing contras in Nicaragua.

In the 1990s many more Central Americans migrated in the wake of natural disasters that led to the “Temporary Protected Status” program that shielded migrants from deportation and allowed them to work legally. President Trump has moved to end this program.

Now, President Trump, in advocating for an immigration crackdown, has focused on the dangers surrounding the Mara Salvatrucha (MS-13) gang, formed in L.A. by youth who fled El Salvador as refugees during the civil war. In an official press release, Trump referred to MS-13 gang members as “animals.”

To Interiano, 41, this language is dangerous. “(That’s) one very small part of what El Salvador is,” he says. “The narrative has been taken away from us. We’ve never had our story be told in our terms.”

But the tide is changing. The way Interiano sees it, Central Americans are several generations in, where they can now start digging deeper into their identities.

“We’ve reached a point now where we can start asking ourselves questions about our past, about our histories and begin that healing process,” he says.

Dubbed, “Isthmus Roots: A Celebration of Central American Creativity & Storytelling,” the May 26 event was held in a community room where a mural displays icons of Mexican culture with images of Zapatista organizers and folklorico dancers. A truck selling pupusas with vegan options was parked outside.

For many Central Americans, growing up in the L.A. area meant confronting the pressures of assimilation not just from white U.S. culture, but also from the Mexican-American communities in which they were raised.

In the Los Angeles-Long Beach-Santa Ana metro area, there are about 1.7 million immigrants from Mexico, according to 2010-14 data compiled by the Migration Policy Institute. Whereas the Central American immigrant population was roughly 564,000, 2011-15 data showed.

Gloria Figueroa, 22, who lives near East L.A. — where student walkouts helped ignite the Chicano power movement in 1968 — highlighted how out of place she felt.

“(The Chicano movement) is so alive still, even to this day,” says Figueroa, who has roots in El Salvador and helped host the gathering. “I was like, I don’t fit in here.”

A Salvadoran neighborhood in the city does exist, but Figueroa yearns for representation across the board.

“We’ve never had representation,” says Figueroa, who also hosts a podcast featuring Salvadoran and Central American people in L.A. “Now, we’re going to do that for our community.”

On Saturday, the discussions were specific to the Central American experience.

A.Sarr, a Nicaraguan musician, spoke about defying assumptions of being from “really violent people.” Breena Nuñez Peralta, a Guatemalan/Salvadoran illustrator, talked about creating comics about her family’s personal stories. Tamika Burgess, an Afro-Latina blogger, spoke about having to defend her blackness when people would find out she’s also Central American.

They spoke about embracing the voseo conjugation in Spanish, which is the use of the pronoun “vos” in place of “tú”, which in English translates to “you.” It’s a pronunciation commonly used in Central America. They also discussed how, despite the lack of Central American representation, Salvadorans tend to be the focus among the diaspora.

For Guevara, the 30-year-old filmmaker, having these niche discussions in person “is beautiful” and a form of advocacy.

Henry Nicia, who helped moderate the May 26 event, said Central Americans must build on this momentum.

“There’s something in the air with our culture. It’s really important to take advantage of that,” he said during the panel discussion.

UPDATE: We’ve clarified this article to accurately reflect where Gloria Figueroa grew up.