The Collaborative Energy of Ponyride, a New Kind of Workspace in Detroit – Next City

The Collaborative Energy of Ponyride, a New Kind of Workspace in Detroit 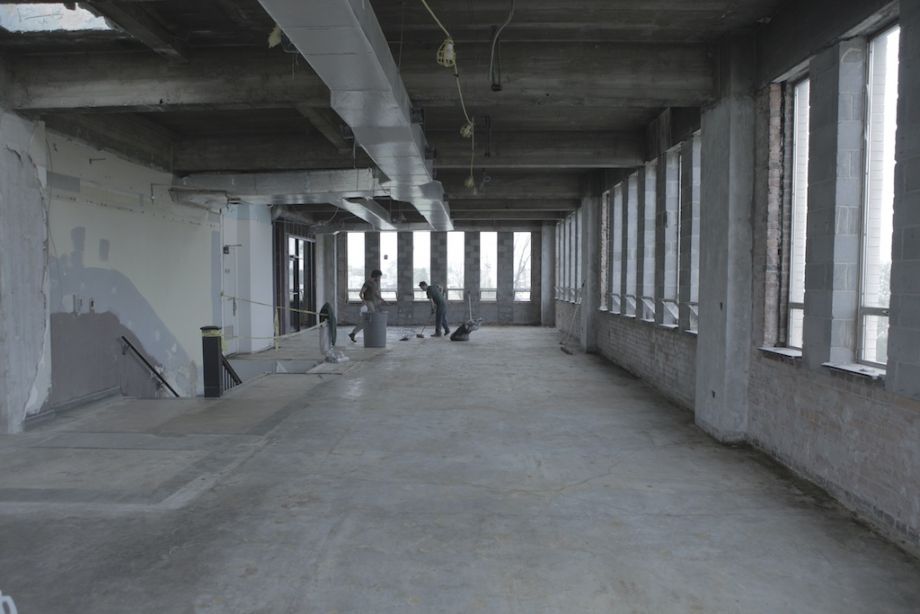 Volunteers at Ponyride rebuild and convert each room of the old warehouse space together. Credit: Ponyride

There’s been plenty of hype about Detroit as a frontier of opportunity where a youngster with a decent credit score and handle on the latest cultural trends can really have a go at it.

The latest evidence comes in the form of the $100,000 purchase of a two-story, 30,000-square-foot warehouse located within a four-minute bike ride of the city’s hippest BBQ joint. The buyers — a small team that includes Phillip Cooley, co-owner of the stylish Slows Bar BQ in Corktown — have converted the warehouse, which Cooley and co. had bought out of foreclosure, into a coworking space called Ponyride.

Ponyride offers social entrepreneurs and artists an inexpensive place — between 10 and 20 cents per square foot — to work on pursuits as varied as jit dancing, coffee roasting, and all manner of making.

(There is a wood shop, a metal smith, and an old-school printing press in the warehouse, tucked next to train tracks that lead to the crumbling ruin-porn icon Michigan Central Station.)

The method for rebuilding Ponyride is based on volunteers who come in, demo the space together, and gradually rebuild.

“We don’t really know what we’re doing half the time,” said architect Kaija Wuollett, who has worked on the development of Ponyride since its inception in January 2011. “We’re just learning, but that’s part of the beauty, the rawness of it.”

Working in this manner, Wuollett said, has “blurred the lines of what an architect does.” Her role is more and more about building relationships in the community and pulling in people with expertise to help as needed. She also said that harnessing other people’s energy is a good way to keep from overthinking the project. The name “Ponyride” itself came from the idea of riding a carousel at the fair, with people hopping on and off. The concept evokes fun and playfulness, and also acts as an overarching ethos.

Not just in name but also in function, Ponyride represents the changing tide of Detroit’s slow economic recovery.

“Ponyride provides an example of how you don’t need a multi-million dollar investment to reactivate and redevelop large-scale buildings,” said Angela Fortino, an economic developer in the Detroit region. “Many times, people become paralyzed by the notion that the redevelopment of a building must occur at once, creating high costs that seem insurmountable.”

Cooley is also on Ponyride’s executive board (along with four others including Wuolett). He and his family have developed several projects in Detroit and understand why the city demands that its people collaborate.

“Because there are [fewer] resources,” Cooley said, “people in Detroit are forced to work together, when we give people space amazing things happen.”

Wandering through the different spaces at Ponyride on a recent weekend, it’s clear that there is an appetite in the city for this kind of shared creative space. A jewelry maker named Rachel, crouches over a table with her pliers and tools, working on intricate rings and bracelets. A newly engaged couple presses their wedding invitations.

On a normal workday, the room gets even busier with some ponyriders perfecting jit moves in the large open studio and others sewing warm clothing for the homeless.

The unplanned manner in which Ponyride emerged ignores the rules of what we know about development. While building stabilization and remediation efforts are inevitable as in any redevelopment project, Ponyride did not set forth a grand vision of programming for the facility. Instead, the founders started with an idea and have adapted the space as they’ve gone along. As Fortino put it, “Rather than establishing an environment for creativity, creativity established the environment.”

Explaining that can be frustrating at times. Wuollett, reminiscing on her experience with presenting Ponyride at a conference, put it more simply: “We just do stuff.”