The Cities Funding Legal Defense for Immigrants – Next City 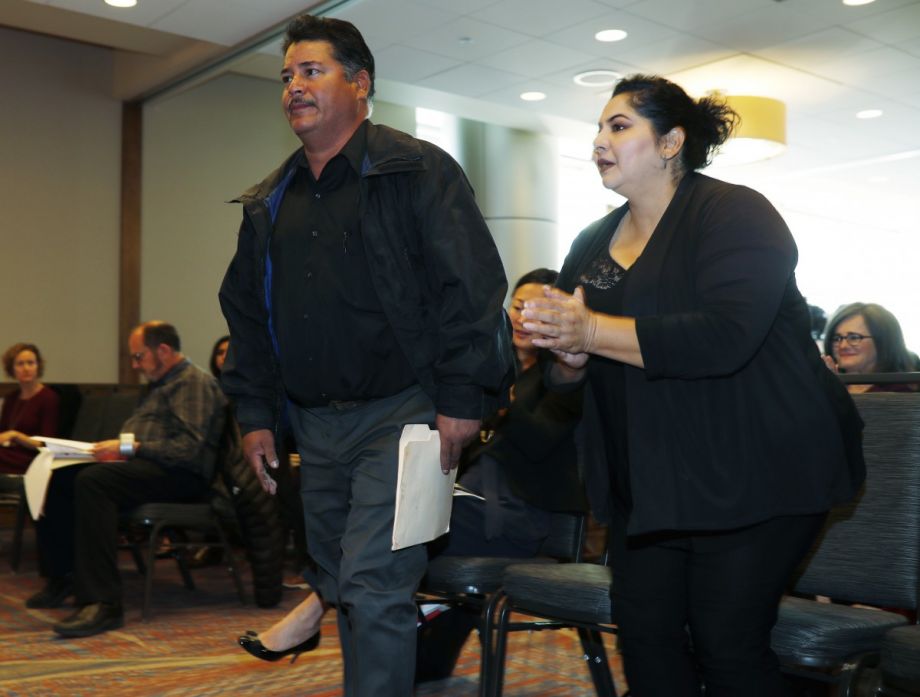 Alvaro Campos, left, through interpreter Guadeloupe Lopez, right, speaks about his experience of filtering through the legal system as an immigrant during a news conference sponsored by the Vera Institute of Justice, Thursday, Nov. 15, 2018, in Denver. Denver is one of two dozen municipalities that has created legal defense funds to pay for lawyers to represent immigrants facing deportation. (AP Photo/David Zalubowski)

In the wake of high-profile Trump administration policies targeting immigrants, advocates and ordinary people have organized responses around the country. Some, like Immigrant Families Together, aim to reunite parents who have been separated from their children at the border. Others focus on ensuring that immigrants can take their children to school and appear in court without fear of detention by Immigration and Customs Enforcement.

And more than two dozen communities around the country have created funds to ensure that immigrants have access to legal counsel during immigration proceedings — a right not guaranteed by the U.S. Constitution, unlike in criminal court. The latest community to join the effort, Fairfax County, Virginia, voted to approve its program May 7.

New York City was at the forefront of this initiative. With $500,000 in 2013, the city, in conjunction with the Vera Institute for Justice, piloted a legal counsel program called the New York Family Immigrant Unity Project. . That effort, says Annie Chen, Vera’s Safety and Fairness for Everyone (SAFE) project director, aimed to address findings from a 2011 report that only three percent of immigrants without counsel managed to win relief from deportation. The Center for Popular Democracy , which also shepherded the fund’s creation, reported in 2013, before the program was established, that 2,000 children per year in the New-York-City area lose a parent to detention and deportation proceedings. The center noted that the cost of foster care for children left without a parent totals some $36,000, ten times the amount an individual’s deportation defense generally costs the City Council’s project.

The program was so successful, in fact, that in 2017, Vera selected 12 jurisdictions in eight states — California, Colorado, Texas, Wisconsin, Illinois, Ohio, Georgia and Maryland — to pilot similar public defender projects for immigrants. Vera offered technical assistance and a small grant to help the selected municipalities design and set up their programs. By the end of that summer, Chen says, the SAFE network had grown to 19 members. Each jurisdiction has at least one legal services provider contracted. Along with providing technical assistance to the participating communities, Vera also collects data in order to verify the initiative’s impact. “It’s important to the public to know that taxpayer dollars are being spent in a way that has impact,” Chen says.

Fairfax County, Virginia, a region of more than a million people in the suburbs of Washington, D.C., is the latest to join the effort, and will fund its program with $200,000.

“What we’re seeing is local counties and cities are very willing to protect their families who are immigrant families or mixed-status families by putting forward funds for legal representation, among many other measures,” White told Next City. White says that in Fairfax County more than 100 children were affected by immigration detentions last year.

In D.C. proper, Arleen Vargas of the Washington DC Interfaith Network reports the number of people deported from the nation’s capital doubled between 2017 and 2018 from 45 to 90. “D.C. is a town of 12 percent immigrants and the majority of them are clustered in two wards in the city,” Vargas says. She added that Washington, D.C. has allocated $2.5 million to an immigrant defense fund.

In D.C., one of the threats making the defense fund more critical is the upcoming expiration of Temporary Protective Status (TPS) for Salvadorans, who represent a substantial community in the capital. More than 300,000 people from several countries, including El Salvador, could lose their legal status at the start of next year if that protection expires.

Grantmakers Concerned About Immigrants and Refugees, a network of funders that aims to address challenges facing immigrants, told Next City that nearly 900,000 immigrants have been served through its defense fund support and that those monies have enabled tens of thousands of applications for relief.

Yet these funds face challenges. For example, in Washington, D.C., they cannot be used to support an immigrant currently being detained. In Montgomery County, Maryland, where county officials announced a defense fund in 2018, the money came with a long list of restrictions on who can receive legal representation through the program. Immigrants who have any of a number of convictions, including membership in a gang, second-degree sexual assault and manslaughter, will not be served under the program.

“Montgomery County is in the process of passing a racial equity initiative where they are going to be passing legislation requiring that all legislation and policy be applied using a racial equity lens,” says Joanna Silver, a volunteer with the Montgomery County Deportation Defense Coalition. She adds that it’s ironic that the county is working on this racial equity initiative but still chose to exclude immigrants with criminal convictions from being eligible for the defense program.

And in Boston, Marty Martinez, Chief of Health and Human Services, noted that Mayor Walsh turned to private philanthropy to help fund its defense fund, yet still received pushback from constituents.

“After we made the announcement of just $50,000 — think, there’s 1 million dollars [of private money] in the fund and we’re putting $50,000 public dollars into the fund — we got a few negative tweets and calls, and: ‘How dare you put public dollars to help immigrants? They broke the law,’” Martinez told Next City.

This perspective fits into what Silver sees as a problematic narrative about “good and bad immigrants.”

“All comes down to what I think of as this really fabricated notion that we can only help good immigrants and that if we help an immigrant who has committed a crime in the past, we’re threatening our public safety,” Silver says. She says that while many people recognize that the criminal justice system has biases that negatively impact people of color, there often seems to be a short-circuit when thinking about immigrants in this context. Noting that providing a defense attorney doesn’t mean that someone will be allowed to stay in the US, Silver ties this issue into conversations about racial equity that have been underway in Montgomery County.

“We point out this irony that what you’re doing is using the past involvement of the black and brown people in our community [with the criminal justice system] to keep them from accessing due process in the immigration proceedings,” Silver says.

For Chen, providing legal defense for immigrants is not a red-state/blue-state or “big city/coastal city” issue, but rather something affecting communities across the nation. In this sense, Chen sustains that pulling such a program together has clear benefits, regardless of scale. “Nobody should be discouraged from starting the program, even if it’s a small pilot program that can only reach a small fraction of the need in their communities,” Chen says.