A Tale of Two Neighborhoods in Transition: Can Community Arts Engagement Make a Difference? – Next City

A Tale of Two Neighborhoods in Transition: Can Community Arts Engagement Make a Difference? 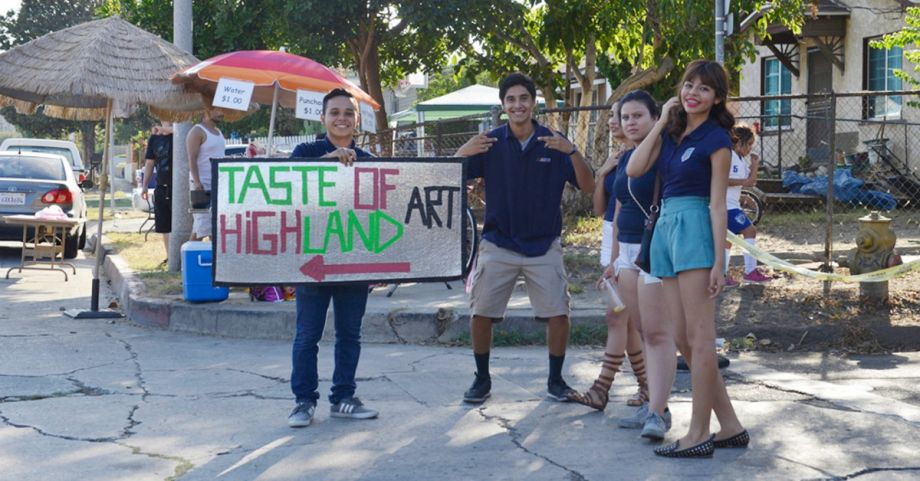 Much has been written about the role of the arts in the process of gentrification. With the fine art market operating at historic high levels (recently estimated at $45 billion a year), and market-oriented MFA graduates looking to participate in the rewards, artists have often come to be seen as privileged members of a successful capitalist system. This perception has caused many working-class communities to push back against “art spaces” entering their neighborhoods as agents of change and displacement. In many areas across the country (well-documented in the media), the clashes between residents and artists/galleries have turned acrimonious and sometimes violent.

However, there is another story to be told. Not all artists, craftspeople and gallerists operate at the top of the art market, nor is that their goal. Many of them gravitate to the vacant warehouses and manufacturing facilities left behind as industry declined in urban areas of the U.S. While the inexpensive rents and large, high-ceilinged spaces are the attraction, these artists have often drawn the ire of neighborhoods afraid of the market forces and developers who may follow. When, and if, this does happen, the artists are often the first to be priced out of the area, as their studio spaces are the easiest to redevelop. It is worth asking, in these cases: Are these artists the instigators of gentrification, or, in some cases, victims of it? And if so, are there strategies that the arts community can take to mitigate disruption of a neighborhood undergoing rapid economic transition?

Two neighborhoods in Los Angeles, both bordering the Los Angeles River (albeit five miles apart), and both with historically working-class, predominantly Latino populations, have experienced development pressures and displacement over the past four to five years. A comparison between the two areas: Boyle Heights and Elysian Valley (aka Frogtown), and the very different response the residents have had to the arts communities operating in their midst, illustrates that it is possible for a constructive relationship to develop between artists and their neighbors. The difference seems to grow out of the commitment, or lack thereof, on the part of the artists, to engage with long-term residents, to support them, and to become a part of the neighborhood.

Starting around 2013, an informal gallery zone developed in an area known as the Flats, a largely industrial area that borders the Los Angeles River. In 2016-2017, the galleries were targeted by a coalition of anti-gentrification groups, demanding the galleries leave the neighborhood. Concerned that the galleries would bring change to the area, one activist stated, “You are the leading edge of gentrification, colonialism and destruction.” Even the area’s oldest gallery, which had operated since 1973 and was devoted to “the creation and advancement of new art works by Chicana/o and Latinx artists,” was not immune from criticism. Although the coalition never declared artists as the enemy, the coalition expressed concern that art spaces take support from developers, who in turn bring rising rents that end in displacement. The group suggested that the artists participate in their community and refuse to use their art to promote “spaces of gentrification.” A series of clashes, documented by the media, grew increasingly acrimonious and tense. In response, many of the galleries decided to close their doors. The hurt, dismay and anger on both sides of the struggle are amply documented in a variety of articles on Boyle Heights.

In 2006, a small group of artists, craftspeople and architects, all operating out of a series of former manufacturing and warehouse buildings along the Los Angeles River, came together informally to create an art walk. The people living in the residential neighborhood surrounding these buildings had little to do with these artists, and in fact, viewed them with skepticism and suspicion. Few of these residents attended the first Frogtown Artwalk, preferring instead to watch the goings-on from the outside, worried about how this event would impact their neighborhood.

In response, the arts community, represented by a new non-profit; the Elysian Valley Arts Collective (EVAC), created a set of outreach strategies intended to engage the neighbors, to encourage them to feel included, and to welcome them into the arts arena.

As a result of these and other strategies employed by the EVAC, when the forces of gentrification hit the Frogtown neighborhood, very few of the residents blamed the arts community for the changes. Although just five miles separate Boyle Heights from Frogtown, the community response to the arts has been radically different. Art continues to flourish in one, but has largely been driven out of the other. Activists in Boyle Heights complained that the galleries needed to support the local community. Artists in Elysian Valley did just that, and it made all the difference.

These strategies are not unique to Los Angeles and can be replicated in other cities. If you wish to learn more about how to bring a community together through art, please contact Elysian Valley Arts Collective, or input your email in the form below.