Surprise! China Built the World’s Biggest Building, and It’s a Boondoggle – Next City 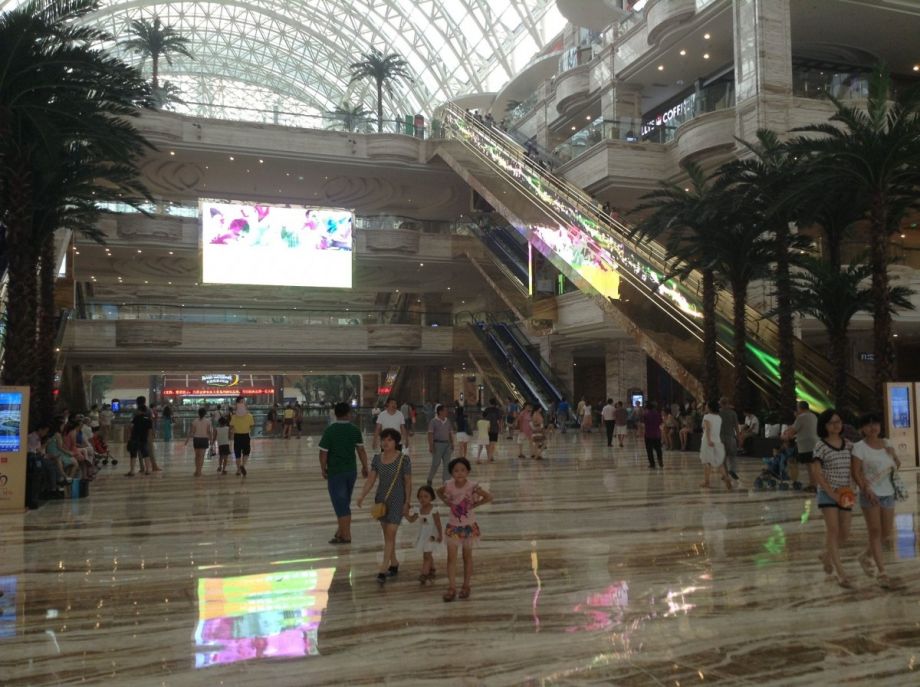 It’s unclear how many people are at the Global Center to gawk as opposed to shop.

Almost a year after it opened, the largest freestanding building in the world sits like a crashed meteorite on the south side of Chengdu, one of China’s booming urban hubs. The enormous “mall,” called New Century Global Center – every Chinese mega-development seems to have a name like this – looms over the city as a symbol of runaway growth and monumental hubris. People biking past it and strolling through it are dwarfed by its insane size. The building contains 5.75 million square feet of floor space. It is 20 times larger than the Sydney Opera House.

The south side of Chengdu already has more malls than demand can possibly fill, guaranteeing that some will fail, which makes the Global Center a high-stakes (and high-profile) gambit for the city. Among its many attractions are a five-star luxury Intercontinental Hotel, a sprawling indoor water park, a replica Mediterranean village, a 14-screen IMAX movie theater, 16 floors of office space, and countless shops and restaurants.

What it also has a lot of is empty space. Retailers are slowly absorbing the Global Center, starting from the front and moving back, such that the far end of the structure remains dusty and shuttered. Low rent for retail space has attracted a few big names – Japan’s chic retailer MUJI and the now-ubiquitous Starbucks – but less than a third of the available shop space has been rented out. And while the office and retail development sprouting up south of the city usually goes for 100 yuan per square meter, the Global Center has chopped its prices down to 30 or 40 yuan.

How it can afford to do this is, of course, a story of corruption – the development has all the hallmarks of a boondoggle built on shady backroom deals. Everyone in Chengdu knows how disgraced former mayor Li Chuncheng colluded with the project’s developer, the Exhibition and Travel Group (ETG), to make a hefty profit. The land beneath the building was bought for a pittance through Li’s connections and his ability to get around zoning restrictions. Farmers who once lived here were forced out, allegedly with far less compensation than deemed fair by Chinese law. The municipal government subsidized the project – numbers quoted in Chinese social media reach into the billions of yuan – and little thought was given to the economic impact of such an albatross.

A photo taken during the Global Center’s construction.

Now, though people trickle in on weekends, it’s unclear how many are here to shop as opposed to just gawk. Families come here because their kids recognize the massive building and head straight for the water park. Couples take selfies in front of the facade before watching the new X-Men in 3D. Clans of laborers and erstwhile farmers from the urbanizing suburbs saunter around and peer through store windows. The more than 900 rooms of the Intercontinental sporadically fill with people who have business at the nearby Exhibition Center, also developed by ETG. Out front, a small army of taxis (both public and private), rickshaws and electric bikes call out to patrons as they wander out the exits.

The opening of the Global Center is actually just one half of a project that includes the Zaha Hadid-designed Chengdu Contemporary Arts Center. The Arts Center was supposed to be completed this year, but after allegations of corruption surfaced last year, followed by the arrest of Deng Hong, ETG’s chairman, and ex-mayor Li Chuncheng, the project has stalled. Blue corrugated walls surround the construction site and tractors move about, but it is yet unclear whether the Arts Center will be finished this year.

Regardless of what happens with the Hadid project, there’s one thing all can agree on: the Global Center, both commercial behemoth and symbol of largesse, is too big to fail. ETG and the government have quietly continued financing the project, even with their leaders in jail, and now it’s up to the market to slowly swallow up this white elephant. In its odd way, that’s already happening: on the backside of the Global Center, legions of informal recyclers stack cardboard onto tractors, peel copper out of wires, and sift through the mountains of flotsam regurgitated by the building. Construction workers who I spoke to last year – couples and entire clans from tiny Sichuan villages who spent three years hauling concrete, metal and glass – are moving to the city with their salaries. The city is slowly but surely absorbing its disgraced symbol, its massive declaration to the world broken off mid-cry, because moving on is what Chengdu does best.