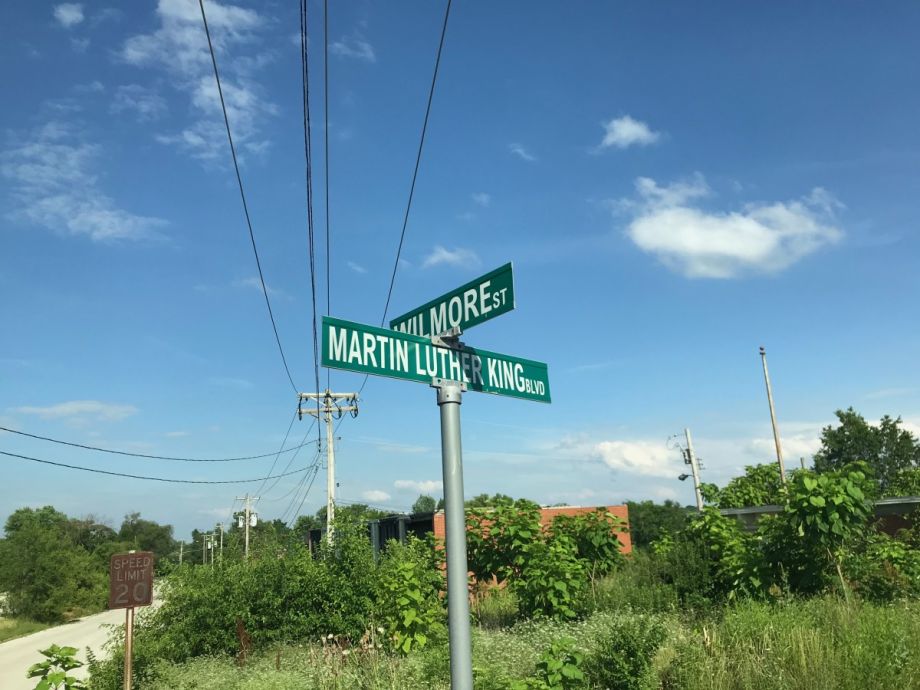 First-time filmmaker Alana Flowers plans to tell the story of Kinloch, once a thriving black community in the St. Louis metro that has since been hollowed out. (Photo by Oscar Perry Abello)

Established in 1948, Kinloch was Missouri’s first incorporated all-black city. In its heyday, Kinloch had a population of more than 10,000. Today, the population of Kinloch is less than 200. Much of the land where houses, mom and pop shops and other establishments once stood in this once-vibrant enclave is cleared of structures and overgrown with brush, according to Alana Flowers, a St. Louis native presently shooting a documentary called “The Kinloch Doc” to chronicle the history and decimation of Kinloch.

Although Flowers has never lived in Kinloch, Her grandparents lived there until they were bought out. The 28-year-old feels a deep connection to the now largely-abandoned city.

“There are a lot of people my age that don’t know anything about the city or how they may have relatives that came from that city, the importance of it, the historic value of it — so that’s the educational component of it,” says Flowers. “The advocacy component is nationwide. I want people to acknowledge the Kinlochs in their area, to prevent what happened in Kinloch from happening in their communities.”

Flowers received a $3,000 grant from the St. Louis Regional Arts Commission to help fund the project. Flowers was one of approximately 20 recipients of grants ranging from a few hundred dollars up to about $5,000 each, awarded by the commission during one of two grant cycles executed each year. The Kinloch Doc and the $3,000 grant illustrate a shift in what the commission is asking artists to do — and whom it is asking to participate in the arts.

In a comprehensive report called “Arts &: A Creative Vision for St. Louis,” released on Sept. 13, 2018, the Regional Arts Commission lays out a plan that promises to broaden participation in the arts, while also positioning arts and artists as more active forces in civic engagement, particularly around issues of racial equity.

“Today, a chorus of voices awakened by the events of Ferguson seeks to be heard, demanding our community address the inequities that led to the civil unrest and find lasting solutions,” the report’s introduction begins. “More than ever, we are a divided community in need of new bridges and connections to recognize our full potential. Every sector of our community needs to do more and respond differently than it did several years ago.”

The commission, which gets its funding from a slice of the city’s occupancy tax on hotel and motel guests, wants to tap into the convening power of the arts to help build those bridges and connections.

“We traditionally think of the arts as a place where you go and buy a ticket and sit down in front of somebody else doing it — how do we get people to want to pick up that guitar and play with someone else?” says Felicia Shaw, executive director of the Regional Arts Commission. “The reason why tapping into your own creativity is really important to us is … that’s where civic engagement happens. That’s where people get to know their neighbors and they get to activate their neighborhoods. They’re coming out of their neighborhoods and singing together, dancing together, they’re playing musical instruments together and that’s where the coalitions get formed.”

According to Shaw, the “Arts &” report grew out of a community engagement process called EVOKE St. Louis, which the Commission launched in June 2017.

“We wanted to engage in a conversation with the broadest public about the role of the arts in people’s lives and asking one other very important question — how can the arts play a stronger role in making St. Louis a better place to live?” says Shaw. “We engaged over 3,000 St. Louis (area) residents in the city and county, as far east as East St. Louis and as far west as St. Charles, and we used individual artists to help people evoke stories of their lives and talk about ways that they think the arts could be more impactful.”

For Flowers, who earned a bachelors degree in communications from the University of Missouri at Columbia and a master’s degree in social work from Washington University in St. Louis, her family’s story is what ultimately inspired her to become a filmmaker.

“Everybody’s not a politician. Everybody’s not an activist. Everybody’s not an educator. So I think the Regional Arts Commission is creating another avenue in supporting people who kind of think outside the box,” says Flowers. “It was very affirming for me for them to see potential in my work. It was affirming to me to know, OK, I am doing the right thing. I am supposed to be doing this.”

When researching the city of Kinloch, the most Flowers knew about it was her family was from there. “I never lived there so I never knew much about it other than what was told to me,” she says. “So me being me … maybe I could find a film on it. And my friend who was getting her PhD from the University of Missouri St. Louis was like, ‘Alana, why don’t you just make one? (a film)’ And I said okay, and that’s literally how that happened.”

Flowers completed a nine-month media production training program beginning in August 2017 conducted by Continuity to learn the technical fundamentals of filmmaking. The training helped her make connections, including one of her instructors, Quinsonta Boyd, who is now working as the videographer for her documentary. They’ve produced a four-minute short film so far, which played at the St. Louis Filmmaker Showcase, and Flowers has since received an invitation to show the film at the St. Louis International Film Festival in November. “I don’t know [yet] if I want it to be episodic or if I want to do a full feature,” Flowers says.

Flowers hopes to be finished with filming by February 2019, and is still seeking additional funding for filming and post production.

Tags: arts and culture, st. louis, for whom by whom