Living Among Warehouses, Community Fights to Breathe – Next City 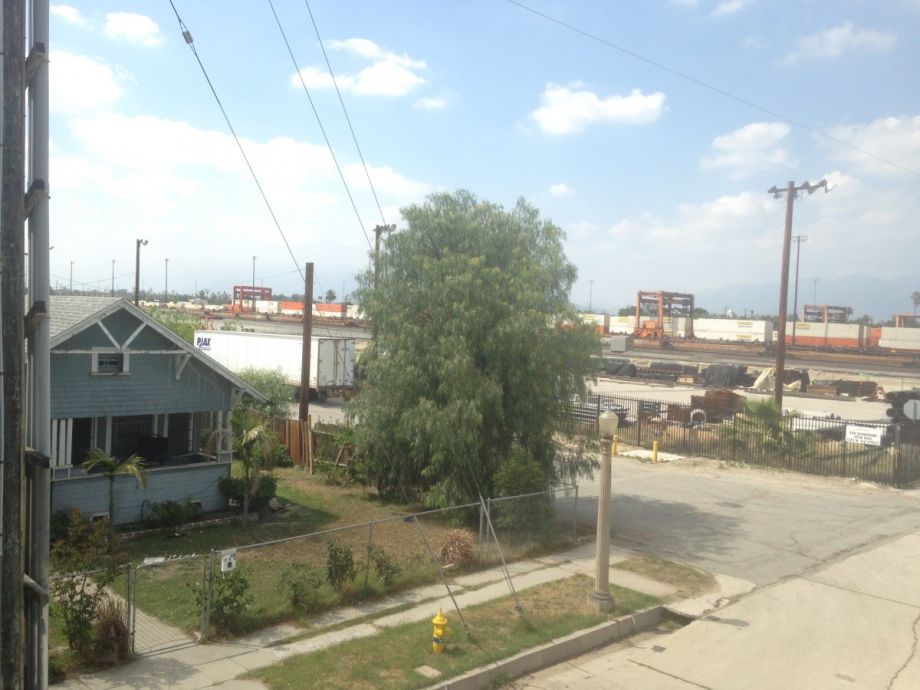 A home near the BNSF rail yard on the west side of San Bernardino, California, where 47 percent of children have asthma (Photo by Ericka Flores)

When Tommy Rocha bought his dream house in Bloomington, a small unincorporated area in the Inland Empire east of Los Angeles, he loved the wide open scenery he could see from his backyard. Diesel trucks had invaded his old neighborhood in Rialto as the distribution warehouses that fuel America’s online shopping addiction encroached on the cheap land there. But in Bloomington, drinking coffee outdoors on the mornings he wasn’t working at an aerospace manufacturing warehouse down in Riverside, Rocha could see clear from Mt. Baldy to Big Bear, with snowcapped mountains strung out in between.

“Now I see a mountain on the left, a mountain on the right and two giant warehouses in the middle,” he says. Though the land behind Rocha’s house was zoned residential when he bought it, four years later, warehouses sprung up there too. Now some of his neighbors complain they can’t even watch TV because of the trucks rattling by all hours of the day.

And the residents of this largely working-class, Latino area worry about the effect of that traffic on their health. “They want to know why their kids all have asthma,” says Rocha.

It’s no secret that Southern California has some of the worst air pollution in the United States. About 1,341 people in the Los Angeles-Long Beach-Glendale area are estimated to die each year because of pollution levels. The Riverside-San Bernardino-Ontario metro area, where Rocha lives, ranks second — with 808 estimated air quality-related deaths per year. About 40 percent of all U.S. goods pass through the region.

Next month, the South Coast Air Quality Management District (SCAQMD) will vote on a new plan to meet updated federal EPA air quality standards. While air quality has improved drastically in the region since the 1970s despite population growth and the explosion of the goods movement industry, Southern California still fails to meet EPA standards around ground level ozone and particulate matter, standards that have progressively tightened over the years.

SCAQMD’s new plan relies not only on more stringent regulations but also on giving financial incentives to companies to slash their emissions. Philip Fine, deputy executive officer of planning, rule development and area sources at SCAQMD, says incentives will speed up the adoption of newer, cleaner technologies while lowering the risk that companies will file lawsuits against new regulation. Environmental groups, including the local Sierra Club chapter and the Center for Community Action and Environmental Justice (CCAEJ), of which Rocha is a part, say the plan is too weak on indirect sources of pollution — like the diesel trucks that serve the warehouses — and prioritizes industry over community health.

“Give them incentives? That’s a slap in our face,” says Rocha.

“Our view is, the polluters should pay up to clean up their own mess,” says Michele Hasson, policy advocate at CCAEJ. With incentives, “you’re essentially getting the people who are suffering and can’t breathe the air to pay the polluters. So we’re paying not only with our lives but with our taxes.”

Exactly how the SCAQMD will raise between $12 billion and $14 billion for financial incentives over the next 15 years is still a matter of debate. That funding would help companies replace their older vehicles and equipment with zero or near-zero emissions technology, and represents a considerable step up from the approximately $100 million to $150 million per year available in incentives today. A draft plan lays out over a dozen possible funding sources, including increasing vehicle registration fees, or gas or property taxes.

“We’re looking everywhere at regulatory measures to reduce emissions,” says Fine. “The problem is even after you institute all these — and it does take time for regulations to get implemented, for technology to catch up when you’re doing a technology-forcing regulation — it’s still not enough.”

He gives the example of a small trucking company that needs to buy a new truck in 2018, five years before the next EPA deadline SCAQMD must meet. That small business owner might buy the cleanest truck available at the time, but it won’t meet a new clean air standard that will go into effect in 2020. Regulation would deem that truck illegal, and require the owner to buy a new one at a loss. Incentives, say Fine, would give the owner a good financial reason to get the newest technology.

Fine says the incentives are intended for smaller companies, not the behemoths like Amazon, Walmart and FedEx. He estimates about half the trucks are owned by these smaller outfits, even when they are serving industry giants. But Hasson and Allen Hernandez, a Sierra Club organizer, say the incentives let polluters off the hook.

“This whole approach to incentives is so far-fetched,” says Hernandez. “We’re literally being invaded here by the largest companies in the world, and you want to give them incentives to clean up.”

They also want to see the SCAQMD take greater action to curb indirect sources of pollution. Where Rocha lives, it’s not factories or oil refineries contributing most to the poor air quality, it’s trucks that serve warehouses that aren’t themselves big polluters. Fine says the SCAQMD can regulate static sources of pollution like factories, with only limited authority over mobile sources like trucks. Most of that authority rests with the state-level California Air Resources Board (CARB), which Fine says is already committing to reductions.

Both Hernandez and Hasson say the SCAQMD could do more. The San Joaquin Valley Air Pollution Control District has adopted an indirect source rule, and Hasson thinks the SCAQMD could lobby CARB to do the same. She says the incentives proposal is tied to the idea that creating more regulations will deter companies from locating to the community, thus depriving the area of jobs.

Dwight Robinson, one of the new Republican members of SCAQMD’s board appointed last spring, said at a meeting last year, “With every rule-making and regulation we need to be looking at the economic impact as well as the environmental impacts.”

Hasson agrees that the SCAQMD must consider economic impacts — to families, not just industry. The warehouses usually hire through temp agencies, shuffling workers around so they’re always part-time and never get benefits. If their children wind up with asthma from living in the midst of the freight traffic, that can cost families an estimated $20,000 a year. “They’re in the negative just to pay their healthcare costs,” says Hasson.

Many of those warehouses are aiming for automation, too. Hasson points to a Skechers warehouse that promised 6,000 jobs and opened with only 2,000, many of which become obsolete due to automation each year.

In a way, Rocha is lucky. He’s got a union job at a plant in Riverside where he’s worked for 39 years. His father retired from the same spot. “You can keep good manufacturing jobs in Southern California,” he says. He’s living proof. But another high-tech warehouse has been proposed that would sit just 70 feet from the wall in his backyard. That’s just 10 feet farther than the distance from home plate to first base at a Little League game.

“They won’t put this in affluent white neighborhoods, they only put them in communities of color,” he says. For now, a petition filed by a lawyer secured with the help of CCAEJ has kept the planning department from moving forward, but Rocha is vigilant and trying to bring more neighbors into the fight. Regulating land use is not within SCAQMD’s authority, but requiring companies to update their fleets faster is.

Fine says SCAQMD is still open to suggestions and potential changes to the plan, which will go to vote on Feb. 3. He and the environmental activists agree on one thing: Air quality has improved dramatically over the past few decades. Hasson and Hernandez say that positive change has happened thanks to regulation and minimal incentives. Fine says regulations have taken the region this far, but that incentives are necessary to keep moving forward.

“We think we can get more emission reductions and improve public health better and earlier by bringing those facilities to the table to see what measures can be taken and try to make them as enforceable as a regulation would be,” he says, “versus coming right out of the gate with a regulation by which the lawsuits will start on day one.”