Searching for Civic Unity for L.A. Black and Latino Communities – Next City

Searching for Civic Unity for L.A. Black and Latino Communities 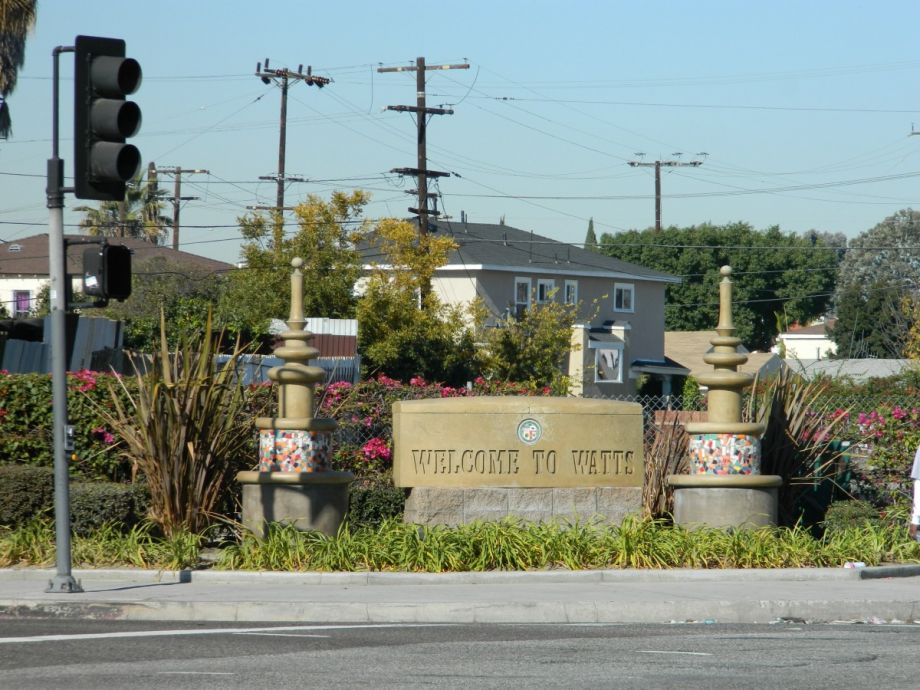 With the highest concentration of Latinos in the United States, the Los Angeles metropolitan area is a collage of cultures and histories that, when put together, offer up a detailed portrait of the way immigrants have spent decades building up the economic and social fabric of Southern California.

But among different minority communities there are disparities, disagreements and misconceptions about race. In South L.A., we’re seeing how historical struggles to overcome poverty have made ethnic unity for citywide equity a tough — but not impossible — battle.

This is the target topic of a new report out of the University of Southern California called “Roots/Raíces: Latino Engagement, Place Identities, and Shared Futures in South Los Angeles,” which was released Nov. 1. Neighborhoods like Watts, Historic South Central and Vermont Square, which housed some of Los Angeles’ largest black communities over the past century, are seeing a major demographic shift as Latino populations continue to fill in.

As that happens, there rises the risk of what the report outlines as “triumphalism,” or a desire by the growing population (in this case, Latinos) to promote its own interests when it comes to political representation instead of pushing for “coalition politics.” The report’s 100 interviews surfaced lingering racial stereotypes among the Latino populations that have migrated into historically black neighborhoods over the past 30 years.

Being able to bring these communities together is the foundation needed for greater civic participation — and with that, the report’s authors say, a more robust push to level the economic imbalance that weighs down both. The poverty level in South L.A. is high, around 34 percent — or nearly twice that of the average poverty level throughout Los Angeles County.

“Understanding how to more fully incorporate Latino residents into the civic infrastructure of South L.A., while still centering the black struggle, is the key issue for all stakeholders moving forward,” say Alejandro Sanchez-Lopez and Pamela Stephens, two USC researchers with the Center for the Study of Immigrant Integration. “If black and Latino residents can effectively organize and build power to plan for their communities in South L.A., it’s possible to extend these alliances to the rest of L.A. and craft a more equitable region.”

They also note that this phenomenon is not unique to the South L.A. area, pointing out that Buffalo, Atlanta, Milwaukee, Houston and more, are all seeing a demographic switch as the United States’ exploding Latino population takes up real estate in historically black neighborhoods.

Incorporating these groups while respecting their histories will build “a more just world through the embrace of the sort of multiethnic model that is needed for our majority-minority region (and soon, nation),” the report notes.

In 1970, South L.A.’s population was 80 percent African-American, held up by a robust manufacturing sector that attracted working-class black laborers across the middle of the century. Prior to that, black populations fleeing the oppressive South during the Jim Crow era paved the way for a population boom in the 1920s, with black writer W.E.B. Du Bois noting at the turn of the century that L.A.’s black communities were “without doubt the most beautifully housed group of colored people in the United States.”

But decades later, as the manufacturing jobs that gave these communities an anchor started trickling out of the city, the black middle class left with them, and more than 150,000 black residents moved out of the South L.A. area between 1980 and 2000. Meanwhile, Latinos, whose populations started shifting north for economic opportunities in the U.S. and away from the civil unrest in South America, continue to trickle into the region by the tens of thousands every decade, adding around 280,000 to the Latino population between the same time frame.

Neighborhoods like Watts showed the biggest transition: In 1980, the population there was 16 percent Latino, and by 2010 it had grown to 70 percent Latino. South L.A. as a whole is currently 64 percent Latino and 30 percent black.

But despite their historical differences, these groups share remarkably similar economic struggles. Black and Mexican households in Los Angeles had an average median worth of $3,500 to $4,000, or about 1 percent of the total wealth held by their white counterparts, at $355,000. Black families were 40 percent likely to be homeowners and Mexican households around 45 percent, while whites were 68 percent likely to be homeowners — about the same rate as Chinese and Japanese families. That’s all according to The Color of Wealth in Los Angeles, a multi-institution report funded by the Federal Reserve Bank of San Francisco.

Median income has been shrinking across the L.A. County area since the 1990s, but for black and Latino populations in South L.A., drops in wealth have a larger impact because of a disproportionate effect of depression wages and a lack of access to high-paying jobs, according to the report. L.A. County families saw their average incomes drop from $62,217 to $55,985 between 1990 and 2010, while Latino families in South L.A. went from $35,255 to $34,227, and black families from $32,270 to $29,975, during the same time period.

While families in Latino communities tend to be hit harder by working for below-living-standard wages, African-American communities in South L.A. were more hampered by unemployment.

There’s also the disparate impacts that law enforcement initiatives have had on these communities. “Both communities also face threats from a carceral state,” the report notes. “But over-policing and mass incarceration play out differently and much more forcefully for African Americans while the threats posed by immigration law and the current deportation regime are key to the Latino experience.”

To top it all of: a long-standing history of pollution, highlighted by California’s CalEnviroScreen tool, which traces air quality levels across the state at the neighborhood level.

“One of the most surprising data points is that 49 percent of the census tracts in South Los Angeles are in the top decile of the most environmentally burdened tracts in the entire state,” says Sanchez-Lopez and Stephens. “While people are usually aware of structural oppressions affecting South L.A., they don’t tend to think of environmental racism as part of the equation.”

The report is careful not to dive too much into the specifics of stereotypes, or highlight perception percentages across each population. And the reasoning for that may be clear: There’s more present to unify these groups than there is to divide them, and this report hopes to act as a major talking point for discussions on civic unity in South L.A. into the near future.