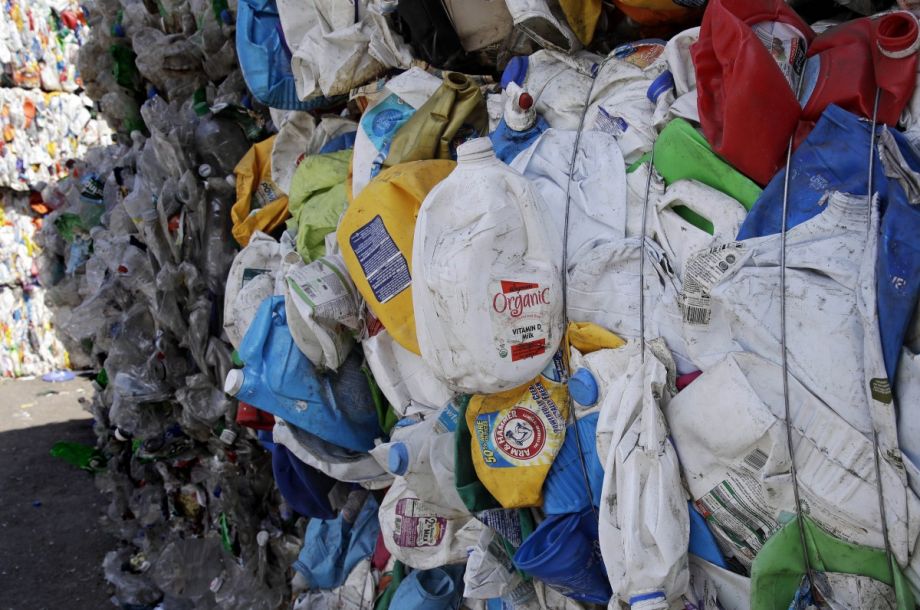 In this Thursday, Sept. 6, 2018, photo, bundled plastic goods, which were separated from paper and metal recyclable materials, are stacked and awaiting processing at EL Harvey & Sons, a waste and recycling company, in Westborough, Mass. Recycling programs across the United States are shutting down or scaling back because of a global market crisis blamed on contamination at the curbside bin. (AP Photo/Charles Krupa)

Americans are so bad at recycling properly that China has banned the import of plastic waste and recycling companies domestically are shutting down.

A report from St. Louis Public Radio found that one processor in the St. Louis area has to throw away 25 percent of what it collects, and that its plant is down for at least an hour a day due to contamination issues.

Single-stream recycling, meaning that paper, plastic, and metal are all thrown together in one bin instead of separated, began in the U.S. in the 1990s, STL Public Radio said. The theory, Jean Ponzi, green resources manager at the Missouri Botanical Garden’s EarthWays Center told the station, was that higher contamination rates from single-stream recycling would be offset by a higher level of participation. “But as more things got lumped in there and people, the markets and the industry got more careless, that’s when we really got into trouble.”

In St. Louis, well-meaning residents have tried to recycle rain-soaked newspapers, food waste, and a garden hose, to name a few. The worst, STL Public Radio says, are plastic bags, which gum up equipment.

China banned the import of plastic waste at the end of 2017, because the country is generating more of its own waste and because the imported plastic it was receiving was poor quality and less profitable, Smithsonian reported earlier this year. The ban could ultimately lead to more than 100 million tons of “displaced” plastic by 2030.

Many cities and states are reducing or eliminating curbside pickup or restricting what they will collect, WasteDive reported. Waste processors are assessing new fees to pick up certain items or waste with a certain percentage of contamination. In Kirkwood, Missouri, for example, before China stopped accepting plastics, the St. Louis suburb made money from its recycling program. Afterward, it had to pay hauler Resource Management $35 per ton. Resource Management announced in August that it would stop collecting single-stream recyclables, and Kirkwood switched to a different company — which charges the city $115 per ton, more than three times as much.

For the time being, many domestic recyclers are finding other export markets, like Indonesia and Vietnam, STL Public Radio reported. Elsewhere, nonprofits are just holding onto plastic in the hopes they’ll figure out something to do with it: Keep Northern Illinois Beautiful, which operates two volunteer-run recycling centers, has more than 7 tons of plastic stored at one center with no clue what to do with it.

“Our promise to the public as a nonprofit organization is to keep this out of the landfill,” Beverly Ashley Broyles, director of development and communication for Keep Northern Illinois Beautiful, told the Rockford Register Star. “We don’t want to break that promise. Because of the ban in China, there are a lot of recycling agencies that are having to resort to taking it to a landfill. We are trying to do everything we can for that never to happen.”

A local recycler in Illinois says that single-stream has led to “aspirational recycling,” when people throw all sorts of things in the bin assuming that it is recyclable.

Meanwhile, New York City, which is estimated to produce more annual waste per capita and in total than any other city in the world, is planning to switch its recycling services to single-stream, set to take effect in 2020.