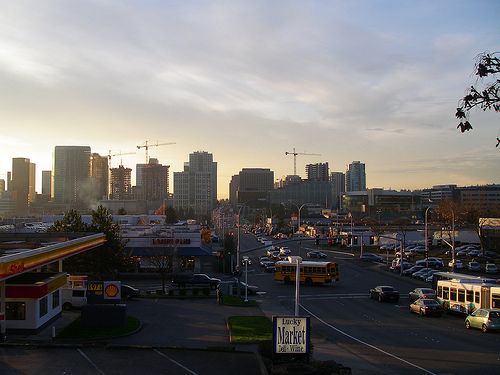 Though Seattle is new to the light rail game, local politicians have zoomed in rather quickly on discussing the merits of specific alignments for future rail corridors. If there’s plenty of support for mass transit in Washington state in general, the question of just where trains should go is producing major headaches for people on the east side of the Puget Sound, where an extension of the rail system will be built by 2020. There, light rail trains will traverse downtown Bellevue, and the big question is how: above or below the existing transit center, or two blocks over, adjacent to an Interstate highway.

For everyone in the region, it seems, the answer is a reflection of how transit should be built, and what features municipal and regional governments will prioritize.

Seattle’s first light rail line opened last year between downtown Seattle and SeaTac Airport. The region’s voters approved an extension across Lake Washington into the eastern suburbs in November 2008, when they passed a large regional transportation funding measure by a large measure.

The East Link project would connect downtown Seattle with Overlake, where Microsoft is headquartered, via downtown Bellevue, the second-largest business district in the region (and an independent city).

For Bellevue’s city council, the line’s effect on the neighborhoods filled with single-family homes just outside of downtown is of prime concern. In negotiations with Sound Transit, the light rail builder, the city’s leaders repeatedly expressed their desire for an expensive underground line.

Meanwhile, cities further east on the line, including Redmond and Overlake, want to reduce costs as much as is feasible with the goal of ensuring that there is enough money to bring light rail as far out into the suburbs as possible.

Finally, Sound Transit has an incentive to attract the largest number of riders, so it wants stations to be conveniently located for maximum customer demand. It also wants trains to move as quickly as possible to compete effectively with car traffic.

In downtown Bellevue, those three competing interests are on a direct collision course.

Bellevue wants a tunnel, but it’s unwilling to pay for any extra costs, so city councilman and real estate mogul Kevin Wallace is now promoting an alternative he calls the “Vision Line” that would skirt I-405, pushing it further away from the center city. This would cheapen the project significantly but reduce the number of expected riders correspondingly since people living or working in the center of downtown Bellevue would have to walk some 1,500 feet to get to the station. Those further afield would have an even longer commute.

Sound Transit has studied this option but has deemed it under-performing because it would operate so far away from a growing market. The problem with locating a station next to a freeway is that it diminishes the ease of walking to the station and the ability to induce development in the surrounding area. Yet the above-ground line the agency prefers is producing indigestion for inhabitants of the surrounding neighborhoods and their concerned representatives, who are afraid of the noise and supposed “danger” of light rail.

At a joint meeting last week, neither Sound Transit nor Bellevue’s council majority was willing to make any concessions, even though the project must move into the engineering stage later this year if it is to stay on time. Meanwhile, wealthy Councilman Wallace has taken it upon himself to hire a consultant to lobby Sound Transit for his preferred alignment. The agency makes the final decision.

According to Ben Schiendelman, Associate Editor at Seattle Transit Blog, the situation is “a really clear conflict of interest” because of Mr. Wallace’s real estate holdings on parcels surrounding the proposed light rail stations, which would likely see increases in value as a result of the infrastructure investment. He claims that a similar situation in Seattle would deny an equivalent councilperson the right to vote on the matter, but that Bellevue’s weaker impartiality rules allow Mr. Wallace to play a major role in advancing his own real estate game. “If Bellevue decides to stick to the I-405 alignment,” Schiendelman told me, “I think Sound Transit will pick the surface alignment. The City Council will come across as not even trying.”

For advocates like Schiendelman, picking the right route — in other words, one not next to the highway — is of paramount importance. And they’re hoping Sound Transit agrees: if the agency’s primary goal is to increase riders and ensure quick access to downtown Bellevue, it will pick a route that does as much. Yet one cannot help but wonder whether stringent local political opposition and the likely threat of future legal action won’t stoke a little fear in the hearts of the Seattle-based agency. Will that be motivation enough for the dastardly highway route to be chosen?