120,000 Square Feet in the Heart of Seattle Is Set to Disappear – Next City

120,000 Square Feet in the Heart of Seattle Is Set to Disappear 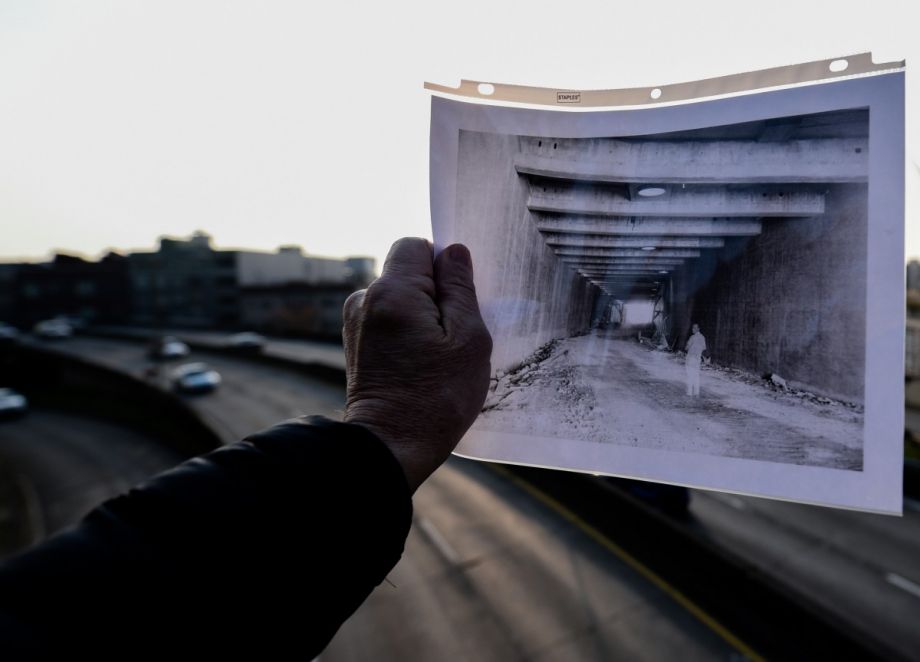 Seattle City Council this week approved a timeline for tearing down the Highway 99 viaduct. Damaged by an earthquake in 2001, the double-decker highway is being replaced by a controversial, long-delayed deep bore tunnel that’s finally set to open in 2018. Currently cast in the shadow of the elevated highway, Seattle’s waterfront will be transformed into a linear park and promenade when the viaduct comes down in 2019.

Amid these changes to the landscape, Recharge the Battery, a grassroots group of architects, planners, artists, engineers and community members, sees another opportunity to transform infrastructure. Currently, Highway 99 runs through the 2,000-foot-long, 60-foot-wide, cut-and-cover Battery Street Tunnel, which takes drivers under the Belltown neighborhood. The Washington State Department of Transportation (WSDOT) will decommission the tunnel along with the viaduct.

The department plans to fill the tunnel with concrete from the teardown and cap both ends to block access, but the group at Recharge the Battery says that would be a mistake. Instead, they want to see that 120,000 square feet of unused space in the heart of the city converted into a subterranean park to serve growing Belltown.

“We believe it’s a bad decision, but it’s not too late to change it,” says Jon Kiehnau, co-founder of Recharge the Battery and a Belltown resident. “To look at the tunnel simply as a liability and fill it in is a one-sided take. You have to look at the fact that the tunnel is 120,000 square feet. Based on the current price of real estate it’s worth more than $100 million. You have to look at what a positive thing it can be.”

When Recharge the Battery asked neighborhood residents in September to imagine alternative ideas for the tunnel, suggestions included a natural park, an ice skating rink, a skate park, event spaces, underground retail, art galleries, gardens and a public bath house. The southern exit of the tunnel sits adjacent to the future northern end of the redeveloped waterfront.

“I think it wants to be an amenity to both the neighborhood and the broader city. It wants to be inviting to everyone around the clock and around the calendar and to all ages and all income levels. It should feel truly public and be comprised of a variety of interests and activities,” says Lyle Bicknell, principal urban designer with Seattle’s Office of Planning and Community Development and a member of Recharge the Battery’s advisory committee.

The group is looking to examples of urban reuse around the world for inspiration. They point to the New York Transit Museum, which is built in a decommissioned subway station. Washington, D.C., turned a defunct underground trolley line in Dupont Circle into the Dupont Underground, an art space that’s still developing. The city of Seoul removed a 6.8-mile elevated highway and built the Cheonggyecheon, a public park along a now-unearthed natural stream.

A concept for reuse of the Battery Street Tunnel (Rendering by Miller Hull, courtesy Recharge the Battery)

Recharge the Battery hasn’t settled on a specific design because it’s still unclear if they’ll be able to convince WSDOT to alter its plan of filling and capping the tunnel.

“While we appreciate all the creative ideas that have surfaced, WSDOT is legally obligated to follow the Final Environmental Impact Statement, which requires us to decommission the tunnel,” says WSDOT spokesperson Laura Newborn. “The Battery Street Tunnel, like the viaduct, is not up to current seismic codes and is difficult to maintain as the equipment inside is outdated.”

WSDOT is slated to sign a contract for the decommissioning work in February, which gives Recharge the Battery just two months to make their case. The group argues that WSDOT should separate the tunnel’s decommissioning from the viaduct’s because there was no public discussion around reuse and there is potentially greater public benefit in converting it instead of using it as a concrete landfill. Their hope is that WSDOT will cap the tunnel for the time being without filling it and transfer ownership of the tunnel to Seattle DOT to allow them time to fundraise and plan for its reuse.

Even if they can convince WSDOT to halt its infill plan, Recharge the Battery faces an uphill battle. The tunnel would require seismic retrofitting, which could cost anywhere from tens of millions to over $100 million. Bicknell admits that’s a very large ask for a city in which “many neighborhoods still don’t have sidewalks and there’s a great need for funding our social services.”

To help justify the cost and liability, the group says the project will need to serve multiple purposes. In addition to providing open space for a neighborhood with few parks, they think the tunnel could serve as a wastewater storage facility or even water treatment site. During heavy storms, Seattle has problems with combined sewer overflows, where the system gets overwhelmed and raw sewage and untreated wastewater gets dumped into Puget Sound. Building storage capacity into the Battery Street project would help offset the overflow impact. If there were a wastewater treatment system built into the project, it could help serve the city’s non-potable water needs.

Recharge the Battery thinks they can solicit a combination of private donations, philanthropic grants and public funds to pay for the project. They are quick to admit it’s an ambitious idea, but Bicknell says it’s worth it. “When we lose our past, we lose our soul,” he says. “Particularly in this age of globalization when every city begins to resemble every other city, it’s these unique elements that add authenticity.”

“Recharge the Battery is a wonderfully inspiring idea,” says Scott Burnham, a writer and urban strategist whose project Reprogramming the City focuses on reuse projects around the world. “This is exactly what Reprogramming the City is about, taking existing assets, thinking about how they can be used for additional purpose and benefit. Using it for infill would be nothing less than obscene.”

Burnham thinks creative reuse of transportation infrastructure will only become more important in the near future as highways and rail lines and bridges age into obsolescence.

“Seattle has a great opportunity to be a model of what can be done with outdated infrastructure,” he says. “Reprogramming is becoming a substantial consideration for cities. There is limited space, therefore we need to be more resourceful with the space we already have.”