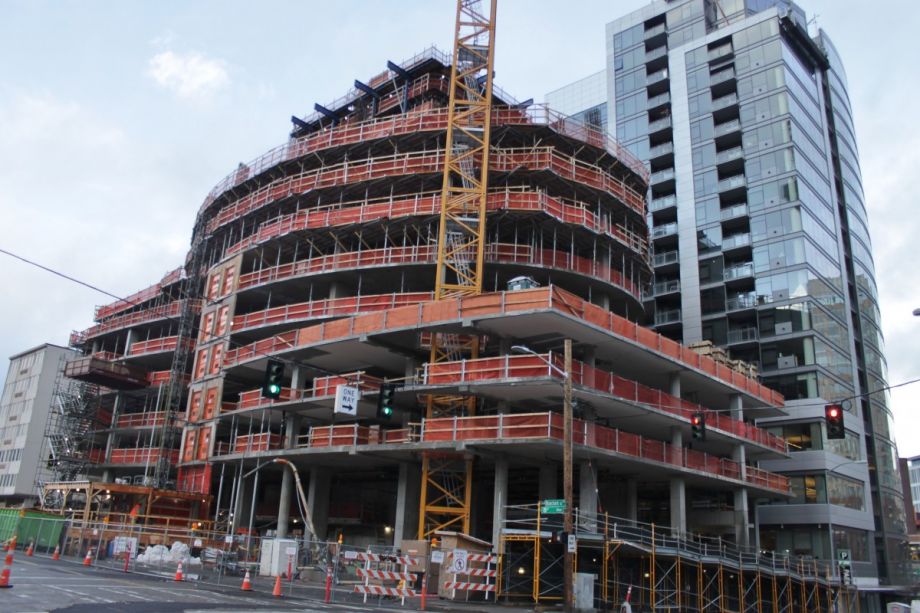 Apartments under construction in Seattle. City figures say Seattle needs to add 50,000 new units of housing over the next decade, including 20,000 rent-restricted affordable units. (Photo by SounderBruce, Wikimedia Commons)

In late December, Seattle Mayor Jenny Durkan and the Office of Housing announced plans to spend about $100 million on affordable housing construction and preservation and homebuyer assistance around the city. It is the largest one-year affordable housing investment the Office of Housing has ever made, about $33 million more than the previous record investment the department made in 2015 and about double last year’s investment.

The funds will go to an array of local nonprofit housing developers and homeless services providers who will construct 896 units in nine new buildings, preserve 535 units in four buildings and construct 25 new homes for low- to moderate-income families.

“You have given the Filipino community of Seattle the best Christmas gift,” said former Filipino Community Center president Alma Kern at the mayor’s press conference in December. Speaking outside the community center, Kern talked about the impact of an onsite affordable housing development, which will be funded with $10.9 million from the city and additional state and federal funding. In the works for about a decade now, the Filipino Community Village will have 94 units of housing for low-income seniors earning 30 to 60 percent area median income (AMI) and a ground-floor space for youth science, technology, engineering, arts and math programing and computer access.

Office of Housing director Steve Walker says that the record funding allocation is “a statement by the Office of Housing and mayor that we need to act with urgency and invest in affordable housing well into the future in the face of the housing crisis.”

The median home price in the city is now around $720,000, a 13.5 percent increase over the previous year (and 20 percent more than the previous record before the 2008 market crash). Apartment rents have climbed more than 57 percent in the past 6 years, as Seattle sees the fastest population growth of any large U.S. city. To help address the problem, the city’s Housing Affordability and Livability Agenda (HALA) says Seattle needs 50,000 new units of housing over the next decade, 20,000 of which need to be rent-restricted affordable units.

Every year, the Office of Housing accepts funding requests from affordable housing developers in the summer and makes its allocations in the winter. The funding comes from a variety of sources, including the Seattle housing levy, developer fees such as incentive zoning payments and the sale of city-owned surplus property. The annual allocation has increased dramatically over the last decade, from just $13.1 million in 2008 to the previous record of $67 million in 2015 and $51.1 million last year.

This year’s significant funding jump comes in large part from $29 million in bonds approved by the city council last year. Another $30.7 million comes from the city’s incentive zoning program, which allows developers to build more densely in exchange for fees paid into the housing fund. The third largest funding source was the city housing levy, from which the Office of Housing drew $28.5 million this year. Voters approved the $290 million property tax levy in 2016.

Walker explained that the Office of Housing has authority to draw money in advance from the levy to pay for housing, in essence taking a loan out on future property tax revenue. This year, the department spent about $10 million in “forward funds,” recognizing that there is a desperate need for affordable housing now and housing developers lined up asking for funds to build it.

“We had good opportunities in front of us that are ready to go now, so it was a question of why wait,” says Walker.

The Office of Housing says the small advance in levy funding likely won’t have an impact on future housing fund allocations. Though they technically could continue drawing “forward funds” from the levy, Walker says they have no plans to do so year over year.

The bigger question related to future funding is whether Seattle’s fierce rate of development continues apace. Because the housing market is hot, the voluntary incentive zoning program provided nearly a third of this year’s available funding. The city is in the midst of rolling out its mandatory incentive zoning program, known as Mandatory Housing Affordability. That program will require developers to build affordable units onsite of new residential developments or pay a fee in-lieu to the housing fund. Commercial developers are required to pay the fee. Walker says when the program is implemented across the city by summer 2018 it will mark the “turning on the spigot” of funding, compared to the voluntary incentive zoning program. But, he cautions that it is unclear how much funding the Mandatory Housing Affordability program will ultimately produce because, he says, “we’re in a development cycle that arguably has peaked.”

The Office of Housing’s funding allocations were already decided before Mayor Jenny Durkan took office in late November 2017, but her support of the spending is in keeping with her campaign promises to address affordable housing and homelessness. At December’s press conference she said, “we know housing alone is important, but we also need supportive services.” Three of the new affordable housing developments will provide 195 units of permanent supportive housing for formerly homeless people and people with chronic mental illness. The funding is also being used to help preserve a building with 190 units of permanent supportive housing.

Shari Wade, a formerly homeless Seattle resident, spoke at the press conference about the way Pioneer Human Services, one of the supportive housing providers that received funding this year, helped her recover from chronic homelessness.

“I know securing housing was 90 percent of what healed me, mentally, physically and spiritually,” she said. “Affordable housing is a key element for helping men and women transcend their past and become productive members of their community.”