This Woman Has Been Working on Diversifying Tech for Decades 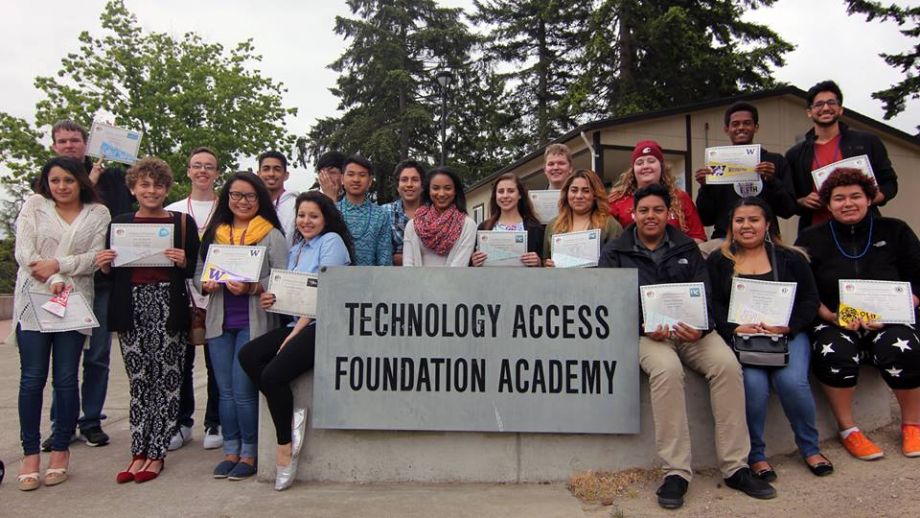 When Trish Millines Dziko retired from her position as a program manager and senior diversity administrator at Microsoft in 1996, she was a rarity in her field. There were very few women of color computer programmers employed in the technology industry — a disparity she desperately wanted to see shift.

So the following year she launched the Technology Access Foundation in a storefront building in the heart of Seattle and started teaching kids from the community to code.

At TAF, students like Miya McClain nurtured an interest in technology. As part of the inaugural cohort, McClain and her peers were introduced to basic programming languages and the more difficult Javascript, and building a server from scratch.

“I came from a super creative family. Everyone was an actor, a singer, or in some form of the arts. But the arts wasn’t something I was particularly good at. I was the one helping my dad to program the VCR,” says McClain who admits that 20 years ago, at the age of 14, she wasn’t sure exactly what it meant to work in the technology industry.

Home-schooled with her siblings under the tutelage of her mother who often enrolled the children in extracurricular activities in the community, McClain jumped at the opportunity to take advantage of TAF’s program for teens of color and began training twice per week in the afternoon. Up until then, her only real computer training involved typing stints on the Mavis Beacon program.

“When I started programming it was like this is a creative outlet. I still have an opportunity to be creative but in a way that my brain functions,” says McClain. She went on to study computer science at Mills College (a connection she made through Millines Dziko) and eventually landed jobs as a program manager at Microsoft and, now, a technical lead at Nordstrom.

Over 350 students went through TAF’s internship training program from 1996 to 2008. In addition to providing small class instruction during the week, TAF helped students land paid summer internships at startups and large tech firms like Microsoft, Expedia and Amazon. For every year students completed the program, they received a $1,000 scholarship to put toward their future college education.

Millines Dziko​ gives a nod to programs like Black Girls Code, Yes We Code and others that have sprung up in recent years across several different cities for creating ecosystems where young girls and students of color can connect with mentors and opportunities in tech. She’d like to continue to see these programs evolve around the critical need to empower students and communities.

“We’re still preparing people for jobs that don’t really want them in those spaces,” Millines Dziko says, pointing to the dismal employment diversity numbers released by major tech companies over the last two years. “I see kids opening their own businesses or working at a small organization that values them.”

After shuttering its internship program in 2008 to focus on addressing root problems of access to technology education in public schools, TAF has opened a full-fledged academy just outside Seattle; TAF Academy is the first public school co-managed by a nonprofit and a school district in Washington State. TAF Academy has graduated 4,200 students so far and reports that 90 percent of its students get accepted into college.

According to Millines Dziko, the next 20 years for TAF includes serving as a national model for integrating STEM principles into the realm of public education, and emphasizing teacher training in the STEM fields from master teachers to paraprofessionals.

TAF is also pushing to increase the number of teachers of color in Washington from 17 percent to 45 percent. (The National Center for Education Statistics reports that over 84 percent of public school teachers in the U.S. are white.) It manages the Martinez Fellowship, which supports diversifying the teaching profession in the state.

“The direction [for the next 20 years] is staying focused on impacting public schools because 90 percent of the students living in this country are there. [Public school] is where they are shaped,” Millines Dziko says. “By partnering, we can help them to improve their academic programs and help to prepare kids for more than just work as a computer programmer or at some big technology company. We are talking about developing students and teaching them to examine situations, think about problems that don’t exist yet, make things better or create something completely new.”