A Playground That Teaches Kids to Love Their Bike – Next City

A Playground That Teaches Kids to Love Their Bike 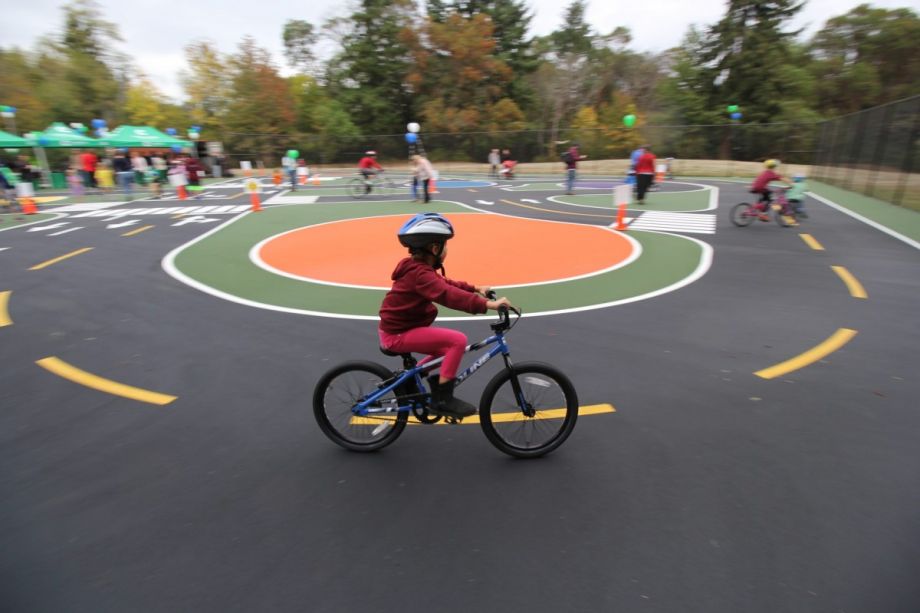 Many would-be cyclists are too intimidated by traffic to hit the road on two wheels, but a new Seattle park gives both kids and adults a place to practice and learn road rules. Last weekend, the Cascade Bicycle Club celebrated the opening of the White Center Bike Playground, a “traffic garden” that replaced two unused tennis courts with a mini streetscape, complete with crosswalks, multi-lane roads, turn lanes and more.

Bike playgrounds have been popular in northern Europe for years, but are rare in the U.S. Steve Durrant, a Seattle-based urban designer, suggested the concept to Cascade after seeing a traffic garden in Copenhagen. The bike club built a smaller version outside their headquarters in Magnuson park before creating the larger White Center version, located about eight miles south of downtown.

“We tried to set up as many scenarios as possible,” Durrant told the West Seattle Herald. “We have stop signs, signals, a one-way system, a roundabout and different types of intersections.”

The traffic garden will be open to the public and used in Cascade Bicycle Club’s education programming. Partners on the project say they expect it to be used by children and adults alike, and to benefit the surrounding neighborhood. “We think a traffic garden is a great thing to build a strong community,” says Jessica Emerson of King County Parks. “White Center doesn’t have a lot of sidewalks. This is a way for kids to learn how to ride on the road, for parents to teach their kids, and this is a really cool partnership that we’re excited about.”

King County Parks provided a $50,000 grant from the project, which cost just under $95,000. The remainder was paid for by private donations.