Scientists Develop “Scuba Rice” That Can Stand Up to Climate Change 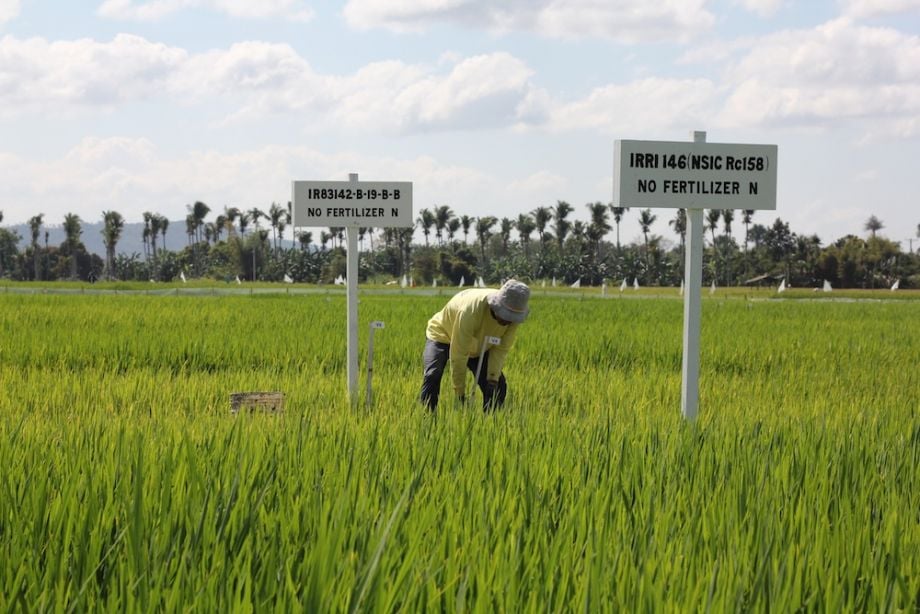 A worker tends to the testing fields at IRRI.

While a destructive flood or drought may only hit a rice field every one to three years, that year will set a farmer so far back that often they begin selling their assets — hand tools, plows, water buffalo — to replace the lost income.

“If they lose their land,” says Dr. Abdelbagi Ismail, a Sudanese scientist at the International Rice Research Institute outside Manila, “there’s no way for them to recover. One year of bad weather can take a farmer from being able to provide food to having nothing.”

It’s a pattern that plays out time and again in the Philippines. After Typhoon Haiyan hit the rice-growing region in the Central Visayas, an estimated 4,500 acres of rice fields were flooded or otherwise destroyed. But that’s only the most recent episode. Recent monsoons flooded the rice plains north of Manila, and drought in the central islands strained rice-growing communities.

With nothing left to sell but their labor, some farmers inevitably move to Manila, where they find a city already saturated with people struggling to eke out a living — and find a place to sleep. With skill sets ill-suited for urban life, many farmers end up in the vast slums of a city with some of the most densely packed acreage in the world. After a natural disaster, Dr. Ismail says, farmers “travel to Manila where they take very low paying jobs, and sink deeper into poverty.”

It’s exactly this scenario that the International Rice Research Institute is trying to prevent. Despite being full of scientists, technicians and researchers, IRRI’s ultimate goal is poverty reduction.

Tropical areas — from the Philippines to Myanmar, India, Mozambique and Burundi — where rice is an important crop, also bear the brunt of typhoons and extreme climate events. While flooding and drought have always been a danger for rice farmers, it has only accelerated over the years, with rains turning destructive more frequently. Even without a dramatic natural disaster, more subtle shifting temperatures affect the harvest. In the thirteen years he’s been at IRRI, Dr. Ismail says 2014 was the first time he’s seen cold damage in the rice fields.

Dr. Ismail specializes in breeding stress-tolerant rice for Asia and Africa. Outside the modernist labs and office buildings of IRRI, are fields of rice against the backdrop of Mount Makiling, a mountain range rimmed with coconut palms, whose sloping ridges echo the shape of a reclining woman. Men and women in wide-brimmed straw hats stoop over bright green grasses of young rice. Each gridded-out paddy is labeled with the scientific name of the variety being tested: IRRI 146 (NSIC Rc158), IRO7A253, PsBRC 18, and so on.

A technician sifts through grains of rice at the IRRI gene bank.

At one field recessed into the ground, Dr. Ismail shows me Ciherang, a popular Indonesian variety, and in the paddy immediately next to it, Ciherang+Sub 1. They flooded the field under a meter of water for 14 days to mimic a natural disaster, then drained it to see how the plants fared. Sub 1 is the strain bred with submergence-resistant genes, colloquially called scuba rice or submarino. In that plot, the plants were healthy, bright and growing in tidy rows. The adjacent plot with the traditional Ciherang was nearly entirely dead — a devastating sight outside of a lab setting.

The same fields that flood one year, however, can be at risk for drought or just plain bad irrigation the next. Ben Pamatmat, an assistant scientist in the branch of IRRI that works with the Philippine government, says competition over irrigation canals has been known to become so fierce that “farmers literally kill for water here.”

Rising seas also mean that in many rice fields in deltas and low-land areas, seawater can seep into the water source or into the soil, rendering acres of fields too salty to cultivate.

Right now, IRRI is working on breeding a single variety that can thrive under all three issues: flooding, drought and salinity.

With less land suitable for cultivation or smaller family plots, breeding high-yield plants with shorter growing seasons has long been a goal for IRRI. It allows a farmer to produce many kilograms more grain per square meter than a traditional variety, or squeeze in a cabbage or sweet potato harvest, so small plots are once again viable. Dr. Ismail says that in rural areas where IRRI has successfully propagated high-yield varieties, they’ve seen a renewed interest in farming. Farmers are more excited about farming and take better care of their land when they know they can depend on their harvest to live on, that it’s more than just a lot of hard work for a little food.

According to Dr. Ismail, IRRI is now seeing how stress-tolerant rice varieties can transform farming communities. A subsistence farmer’s first priority, he explains, “is getting sufficient food for the year. Without that, they won’t think about anything else. Nothing else in important.” Health, education for their children, or strategies for making more money beyond subsistence are concerns that fall far behind immediate hunger. The flip-side of this is that once they can secure the year’s food, things like school attendance and maternal health begin to improve.

“With these new varieties, the farmers can now go into more commercialization,” Dr. Ismail says, “so you see the farmers changing from just the varieties that they only eat to [high-value crops] that they can sell. Tomatoes, okra or sunflower become very common.”

Beyond breeding climate-adaptive rice varieties, IRRI works on getting their seeds out there, working with national governments to cut down the red tape that blocks a new seed variety from being introduced or to devise subsidies or other distribution strategies to make stress-tolerant rice attractive and accessible to farmers. They may help governments map the regions most likely to need salt-tolerant or drought-resistant rice, and provide technical assistance by overlapping GIS photos to figure out when flooding begins and ends, helping the government to become more focused so they know exactly where and when to deliver.

“There’s still a long way to go,” says Dr. Ismail. To date, he estimates that there are a few million acres across the world planted with one of IRRI’s stress-tolerant rice varieties, but that’s just a fraction of the millions of acres that could benefit from scuba rice, and the millions more that need drought-tolerant rice.

While there are many reasons driving farmers to move from the field to the city, having a crop that can stand up to the onslaught of natural disasters gives families one less reason to leave the farm.