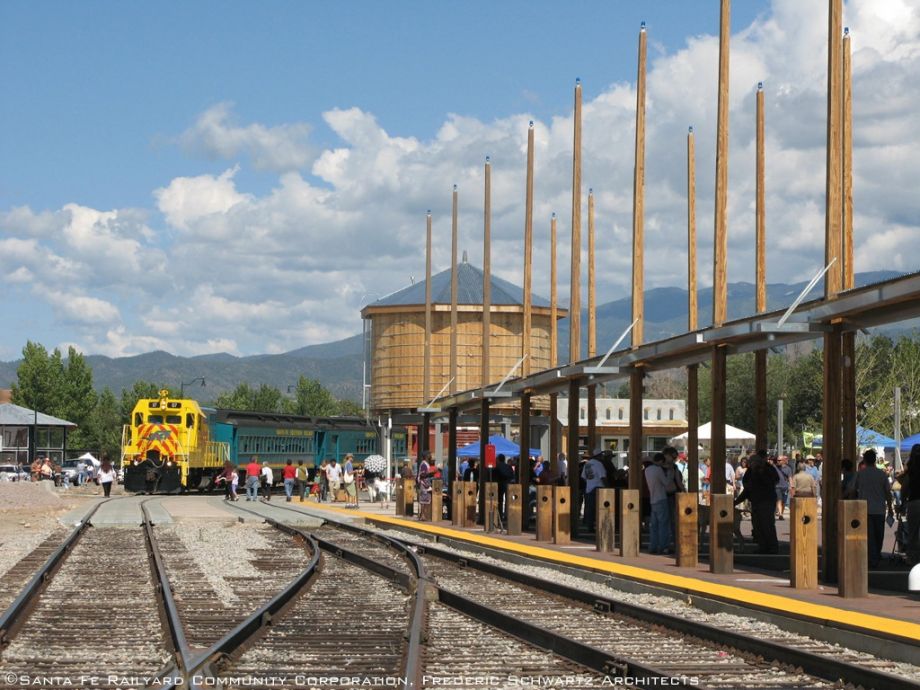 Editor’s note: This is the second in a series of interviews by Mary Jones with the 2011 winners of the Rudy Bruner Award. The Santa Fe Railyard Redevelopment was one of four Silver Medalists. For more information on the Rudy Bruner Award please visit http://www.brunerfoundation.org/rba/.

With shopping, movie theaters, art galleries, and public transportation, the Santa Fe Railyard seems to have everything. What does the visitor experience look and feel like?
Whether arriving by rail at the historic Santa Fe Depot or by bicycle, car or on foot, the visitor to the Railyard will see an architecturally unique site several blocks long with beautifully restored historic warehouse buildings and contemporary structures with an industrial aesthetic following along both sides of an active rail corridor. As they continue along the tracks, they will discover an award-winning 10 acre park with innovative sustainable landscaping, a creative children’s playground and lots of open space for all. Weekday pedestrians mingle with cyclists as numerous RailRunner commuter trains pull in and out of the station and shoppers come and go. Friends and business colleagues have coffee or lunch outside at one of the restaurants and watch the trains go by.

Weekends explode at the Railyard, particularly during summer and fall when the outdoor Farmer’s Market is in full swing and the Artists Market across the street welcomes visitors into the Park. Thousands pass through, neighbors meeting neighbors and tourists too, checking out high quality local produce, dairy and meat products, locally made arts and crafts and enjoying the sounds of a country bluegrass band, a 10-year-old classical violinist or an actor reciting Shakespeare sonnets. Shoppers can partake in free outdoor tango and salsa lessons as the aroma of roasting chilies wafts by. The last Friday of every month showcases 10 contemporary art galleries with the Last Friday Artwalk, drawing hundreds to meander through the gallery offerings and then relax over dinner at one of many casual dining choices.

Special community events include free outdoor concerts, movies and holiday celebrations in both the Park and Plaza locations. A recent weekend featured the Buckaroo Ball with a cowboy, his horse and dog performing rope tricks and country Swing dancing for all, and a Fathers’ Day Fiesta supporting young fathers and featuring local Hispanic music and a free movie after dark. This summer – the annual Gay Pride parade and the International Folk Art Market opening night reception for 150 artists from 90 countries with cuisine and music from around the world. What the visitor to the Railyard can always expect is the unexpected…

How did the idea for the Railyard redevelopment come about? Who were the key players?
The Santa Fe Railyard Redevelopment Project arose from pubic outcry over a landowner’s proposed development that was deemed too dense, too high, and inappropriate for Santa Fe’s 400-year-old downtown area and the long established neighborhoods on its west side. The City of Santa Fe, with the help of the Trust for Public Land (TPL), purchased the land, and undertook a long public process of planning, design and implementation lasting 13 years.

The Railyard redevelopment project was a bold step for a small city of 70,000 people to undertake; bolder still was the extent to which the process allowed the public to influence planning and design. The citizens recognized that Santa Fe was in danger of losing its historic Railyard, a key component of its identity. The result contributes to Santa Fe’s economic, cultural and environmental future. It draws on cutting-edge design from a world-class team while honoring New Mexico’s singular past as both a home of the ancestral Puebloans and the Spanish colonial capital city of North America.

It would have been far easier for the City to look the other way and allow development of hotels and big box retail in this historic space. Instead, together we created a place that honors the past and supports a meaningful urban future.

How has the rich history of the Santa Fe Railroad been incorporated into the railyard’s redevelopment?
During the master planning phase, an analysis of historic development patterns from 1881 to the present was done. It became very evident that the Rail Yard had always stood out from its surrounding residential neighborhoods in uses, scale and materials. Thus, the Rail Yard and the Rail Yard Park were designed to purposely maintain the exceptional style and scale from the surrounding traditional historic small-scale, fine-grained neighborhoods. The master plan requires maintaining the pattern of the existing rail lines that served the site and using some of the rail related buildings. In the park, this resulted in bringing back some of the long forgotten historic rail alignments as part of the sidewalk pattern and orientations.

Although different in style and scale, the Rail Yard plan and site reached out to the neighborhoods, the city overall, and the region, through an exceptional emphasis on becoming the center of the local, city-county and regional trail system and transit networks. The park and the master plan are a fully integrated multi-modal site. Pedestrians, bike, transit and auto are carefully allowed to work together to create a lively, live-in, and embracing site. Because of the success on this level the park and site are heavily used and yet arrival is as often by walking or biking instead of driving. The emphasis on multi-modal connectivity became the generator of a wide array of collaborative investments by the City, County and State to develop and expand the trails and transit—including regional commuter rail—that now serve the site.

At each location where walking connections either existed or could be developed, a detailed design analysis was done to maintain the highest level of pedestrian connectivity while controlling auto traffic.

There are yet more phases to be revealed in the Santa Fe Railyard Redevelopment. What can we expect to see in the next 5 years?
The next five years should carry the project to its full potential. After opening in 2008, we have strived to make the Railyard a center for the community and local businesses. Twelve new buildings will be developed including a 2,000 seat cinema with New Mexico’s only commercial IMAX screen, new restaurant, retail and office space, as well as multi-family housing. A post-production film studio is also in the mix.

The landscaping will mature to provide more shade and beauty in the Park and Plaza areas. As offsite trail connections are completed, the multimodal transportation hub will become the center of the connection between commuter rail, bicycle trails, free shuttle services and a bicycle sharing program.

Santa Fe has a very long history and change comes slowly. Over the next two years we hope to demonstrably increase the use of the Park and open spaces for community events and create new traditions. The Santa Fe Railyard Project is only beginning to realize its long-term potential.