San Francisco’s New Agreement to Coexist with the “Google Bus” 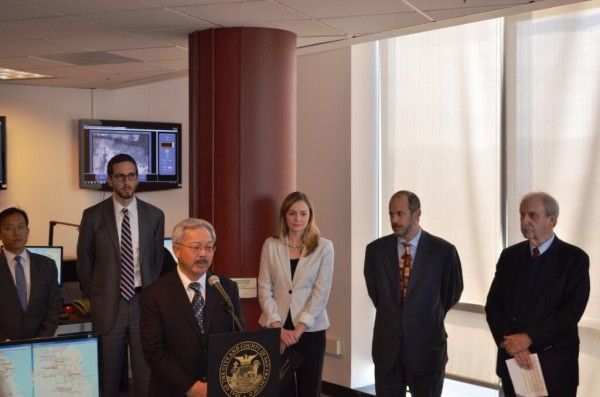 The result is an 18-month pilot program during which the commuter shuttles will have shared use of 2,500 Muni bus stops that tech companies, as well as hospitals, pharmaceutical companies and others, use to ferry people down the peninsula. Lee, surrounded by representatives from Google and Microsoft as well as local transit officials, said the city will be compensated for the companies’ use of stops at a rate of about $100,000 a year.

Beyond that, there’s a bid in the plan to identify buses according to which company is responsible for running them — despite the moniker, not all the shuttles belong to Google. The city, Lee said, will also get data from the companies that it can use in future planning, a point of contention that has emerged again and again in debates over quasi-public, quasi-private transportation. (Uber’s fight to operate in Washington D.C., for example.) The city will also share that data back with shuttle bus operators.

San Francisco is moving to act on the shuttles, Lee said, because “there’s been a proliferation in the last 2.5 years.”

“We have some 400 different shuttle companies that exist in the city,” Lee said, “and we didn’t know up until now, and I think we’re still learning, where all the routes are, how many people they pick, and what are the safest practices that they could be abiding by with us.” City transportation head Ed Reiskin, also at the conference, pointed out that the commuter buses serve enough customers to count as a “mid-sized transit agency.”

Up until now, the mayor admitted, the city had let the shuttles operate in a “somewhat uncoordinated” way. David Chiu, president of the San Francisco Board of Supervisors, agreed, calling it the “wild, wild west on our streets.”

Tensions over the commuter shuttles that have flared up in recent months are about much more than schedules and wait times — they’re a reaction against how the influx of tech money and tech workers is changing the face of San Francisco. But they also concern those day-in, day-out details. The shuttles are regularly accused of blocking transit lanes, diverting cyclists and forcing Muni buses to use regular travel lanes. The new plan is meant to put out some of those fires.

By Lee’s own admission, it’s only a start. He called the plan “an agreement on an approach,” and later talked about it as a symbol of the city’s new commitment to show a little leadership on the topic. (The proposal still needs approval from the San Francisco Municipal Transportation Agency’s board of directors, who will receive it on January 21. Tom Nolan, chairman of the board who was at the press conference to express his support, joked that it stands a very good chance.)

The plan may well spark a new conversation over the wisdom of renting out public infrastructure, especially for an amount of money equivalent to the gummy bear budget over at Google headquarters. Lee wasn’t unaware of that concern, it seemed, presenting the $100,000 in annual compensation as “a little bit of cost recovery.” But he argued that the buses pay for themselves in other ways: “The shuttles are here, and they’ve been helpful in that, but for them, possibly we could see some 45,000 additional vehicle miles on our roadways or some 11,000 tons of carbon emissions on our streets.”

“We need to stop politicizing people’s ability to get to work,” Wiener said at the press conference.

The plain-talking Lee was eager to keep the focus on his shuttle bus plan. “Although they’re symbolic of other things that perhaps people are angry about,” the mayor said, “I think that they provide a good service.”

A full video of Monday’s press conference is below.