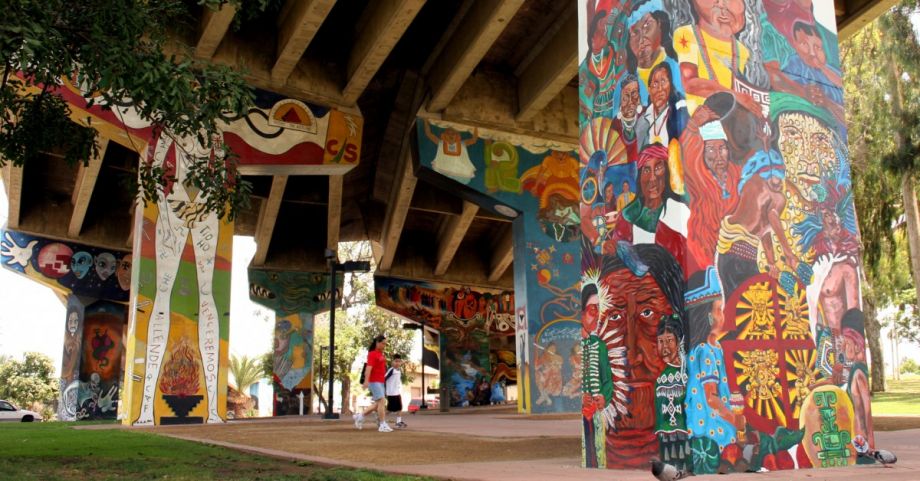 Chicano Park is a national historic landmark and beloved neighborhood spot, but the neighborhood is otherwise lacking in open space and trees, activists say. (Photo by kellinahandbasket / CC BY 2.0)

Growing up in City Heights in San Diego, Julie Corrales remembers tying a plastic-wrapped ball around a stop sign to play tetherball with her friends.

Aside from a basketball court and a small recreation center around her neighborhood, there was no playground equipment. So, she says, “that’s how we played.”

Now, Corrales is raising her children in Barrio Logan, a politically active and artistic community in San Diego. It’s a largely Latino neighborhood surrounded by highways and junkyards.

The neighborhood is home to Chicano Park, an 8-acre park and national historic landmark located beneath the San Diego-Coronado Bridge, but still, Corrales says the community is lacking in open space and trees.

The canopy of trees could provide shade in the summer and help remove air pollution, specifically in a neighborhood that has ranked high among the worst census tracts for pollution risks in California.

“I’ve lived in communities that have experienced environmental racism my whole life,” says Corrales, now a policy advocate with the Environmental Health Coalition.

These are the kind of disparities the city of San Diego is aiming to address with its new parks master plan. This nearly 100-page document, once approved by the City Council, will replace a parks guide that was created in 1956.

The preliminary document represents a new way of planning that prioritizes quality over quantity and that could impact communities that have suffered from years of disinvestment.

In San Diego, the current park standard is solely based on acreage. The city has used a standard of 2.8 acres per 1,000 residents for neighborhood parks and joint use facilities.

As the city continues to grow through infill development, with limited open land, the draft plan stresses how increasingly difficult it is to meet this “acreage-based standard.”

The proposed park plan establishes a point system that values park features, instead of solely focusing on park acreage. Moving forward, the standard will instead be 12 points per 1,000 people, with points reflecting a range of recreation experiences.

Points will be given to a park for its amenities, programming, transit connectivity and other factors.

Heidi Vonblum, environmental program manager in the city planning department, says small parks can be of high value if they have sufficient amenities.

“Let’s say a developer constructs a very large park, but doesn’t put very many amenities. Even though that park may be very large, its value may be very small,” Vonblum says. “On the flip side, we’ve seen other examples where we have very small acreage-sized parks that are highly used, highly amenitized, have lots of programming incorporated into them and we see those small spaces as sort of small, but very mighty.”

One example of a small park with the potential to be “small but mighty” is Children’s Park, a 1.7-acre downtown space with a forest of pine trees, grassy mounds and a small pond.

This mini-park is slated for an $8 million renovation.

These improvements will add public art, a children’s play and picnic area, open space turf, an elevated walkway, a vendor and restroom building, an off-leash dog park and an adult fitness area. Improved lighting and “a redesigned forest area” will promote “a sense of openness,” according to the draft plan.

The park will go from 13 to 36 points of recreational value once the planned amenities are in place.

Under the proposed scoring system, a soccer field and baseball diamonds could add up to 8 points.

There’s also value in open space parks and trails. Every half-mile segment of an officially recognized trail, for example, would equate to one point.

Points could also accrue if a park is integrated with transit or if it includes a connection to a bicycle track.

City staff conducted online surveys and held in-person workshops and community pop-up events before developing the draft park plan. Public events (before COVID-19) were held in council districts across the city, she says. They asked residents what they would like to see in their parks and what they liked and valued about the city’s park system.

“We took that information and really wanted to develop a system that would realize the vision that we heard our citizens wanted,” Vonblum says.

“People really wanted to see upgrades to the existing parks that they have in their communities,” she says.

Since the release of the draft parks plan, city staff has held virtual public forums and presentations to solicit input on specifics of the parks guide. The plan is also available on the city website where residents submitted comments through an online survey. It has also been presented to different neighborhood park committees.

Planning director Mike Hansen says online response about the plan has been higher than expected. COVID-19, he says, has highlighted the importance of parks.

“We feel that the pandemic actually creates heightened interest in this plan because the topic of parks and people using open spaces has become more pronounced,” Hansen says.

“We expect that it will change from this draft to the final based on the input,” he added.

Comments are being evaluated, but some changes seem to be underway.

Vonblum says conservation groups and the development community have chimed in about the important role nature has played in the mental health of people during the pandemic.

While the park plan included points for trails and access to trails, Vonblum says the comments made it clear that “our point system didn’t fully capture the full mental health wellbeing that can come from the specific location of the trail.”

For example, if a project included a large habitat restoration component and a trail had access to it, the proposed plan was not valuing the restoration enough, Vonblum says.

Also central to the proposed park plan is the restructuring of its park financing strategy.

San Diego’s parks system heavily relies on the fees developers pay to fund parks when they build housing. This system, according to the plan, limits the resources that could be used to expand recreational opportunities in neighborhoods with fewer parks.

The city is proposing that developer fees should be distributed citywide instead of solely benefitting the communities where developers are building.

“It’s important for us to be investing those resources in a way that is providing the best access to different parts of the city, as well as the most valuing benefits to our residents,” Hansen says.

Prioritizing where these funds go in the future will be based on the Climate Equity Index — a tool created by the city’s sustainability department and the University of San Diego Energy Policy Initiatives Center — that helps the city measure inequity to address neighborhood disparities. Indicators include flood risks, tree coverage, asthma rates, overcrowdedness, and poverty rates.

Also included in the park plan is a four-part approach to prioritizing investments: length of time a person must travel to get to a park or facility, socio-economic status of people living in an area, number of possible users relative to a park’s capacity and recreational value, and existing park conditions.

The communities and parks that score the highest would “rise in priority to receive funding that expands facilities and programming,” according to the plan.

Corrales, with the Environmental Health Coalition, says the plan is a step in the right direction, but she worries certain neighborhoods could be ignored.

She finds aspects of the plan’s “prioritization framework” concerning because it doesn’t include air quality issues that would boost up certain neighborhoods suffering from pollution.

Corrales says less needy neighborhoods could be prioritized over areas like San Ysidro, a small community located between three major freeways and near the U.S.-Mexico border. Residents there have expressed concern about the poor air quality in the area.

While Corrales says the quality of recreation should be improved, there is still a need for more open space, period, she says.

She fears a potential scenario that could add a basketball court in Chicano Park and then ignore the need for open space.

“That’s just not practical,” she says. “Children don’t have enough space to move around.”

But, Corrales says, she’s hopeful that the proposed financing strategy could benefit communities like hers.

She thinks of the stark differences between La Jolla, a community about 15 miles north of Barrio Logan. La Jolla is surrounded by ocean bluffs and beaches and is home to a golf course, a recreation center and a host of parks.

In the wake of COVID-19, Corrales says the need for open space has been much more apparent. She’s seen people out at Chicano Park during social distancing orders.

“We have such limited green space we’re not able to social distance as much as we could be and still enjoy the outdoor space,” she says. “Especially when you’re keeping kids at home that don’t have backyards.”

“We need these spaces all the time,” she added.

She says many of the residents’ comments have been about pandemic park closures, not the parks plan.

“It has really highlighted the importance of people having access to public open spaces to get out,” Vonblum says.

Vonblum says the city envisions accommodating a majority of new housing within transit priority areas where land could be used for open space areas.

“Rather than giving up and saying we don’t have land, we want to be innovative,” she says.

To Vonblum, this new way of planning is also a response to the way residents use public spaces.

“What we’ve seen over the past several decades is that we are a very mobile city,” Vonblum says.