New Starts: One Streetcar Gets OK, Another Gets Shelved, and Chinese to Build U.S.-Mexico Rail Link – Next City

New Starts: One Streetcar Gets OK, Another Gets Shelved, and Chinese to Build U.S.-Mexico Rail Link 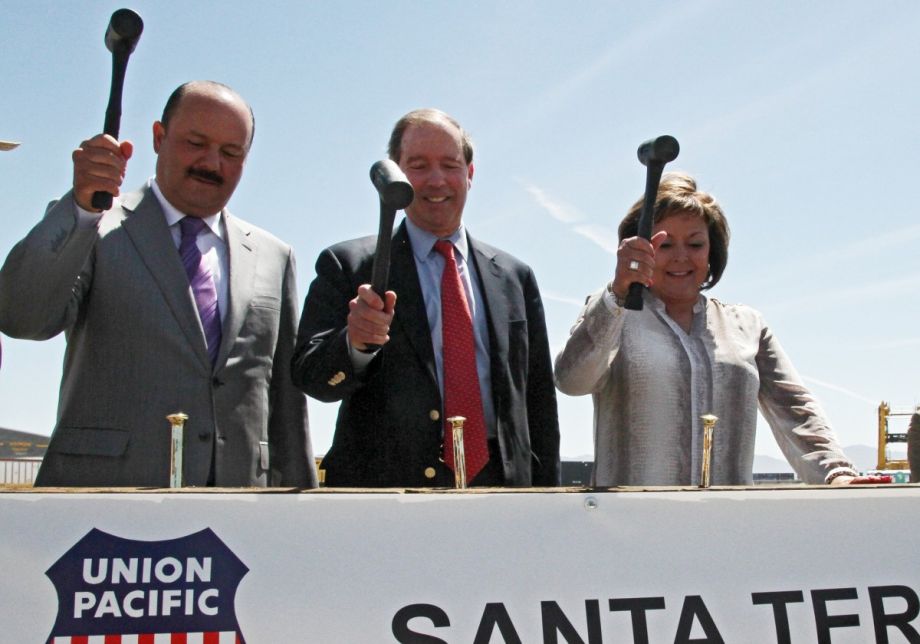 San Antonio Officials Push Reset Button on Modern Streetcar Project
The last streetcars in San Antonio rolled into the great carbarn in the sky in 1933, and more recently, efforts to bring them back have met with public skepticism. Voters rejected a proposed light rail system for the city by a 2-1 margin in 2000, and similar opposition has now derailed, for the time being at least, VIA Metropolitan Transit’s proposed modern streetcar network that would crisscross downtown San Antonio and connect with planned transit hubs on the eastern and western edges. After opponents submitted petitions to place on the November ballot a city charter amendment that would require a public vote before any streetcar plan could proceed, city officials have reversed course on what had been a full-speed-ahead drive to build the system’s first phase.

The San Antonio Express-News reports that VIA officials announced Aug. 1st that they would agree to suspend the streetcar project after Mayor Ivy Taylor and Bexar County Judge Nelson Wolff announced the previous day that they were withdrawing their support. Wolff, who is not a jurist but rather the chief executive of Bexar County as the head of its Commissioners Court, is up for re-election in November; Taylor, a City Council member from an Eastside district, became San Antonio’s first African-American mayor when Council appointed her to serve the rest of Julián Castro’s term after he was chosen to succeed Shaun Donovan as Secretary of Housing and Urban Development. Taylor has announced she would not seek election to a full term in 2015.

Taylor urged VIA’s board to put the project on hold at a special board meeting on July 30th. The board will formally vote to do so at its Aug. 26th meeting.

City Council followed up on Taylor’s and Wolff’s announcements by voting to rescind its approval of $32 million in city funds for the streetcar on Aug. 7th.

As for the opponents, a group calling itself Let the People Vote collected more than the required number of signatures to put the charter amendment on the November ballot, but San Antonio City Clerk Letitia Vacek ruled Aug. 6th that 8,000 pages of signatures were not valid because they lacked a circulator’s signature. State law does not require one, but the San Antonio city charter does, she said.

While Taylor urged VIA officials to work with city, county and community representatives to develop a new multimodal transportation plan, telling them “the pause is not the end” of the modern streetcar proposal, the Express-News report said the moves mean the 5.9-mile, $280 million plan is dead in its current form.

In their remarks, both Taylor and Wolff pointed out that San Antonio is the only one of the nation’s 10 largest cities to lack a true multimodal transit system.

Santa Ana Approves Downtown Streetcar Route
Outsiders may regard Orange County, Calif., as a vast collection of sprawling suburbs, but it is home to one of the country’s more densely populated sizable cities. WIth more than 12,450 persons per square mile, the county seat of Santa Ana is more densely populated than Chicago, Philadelphia, Newark and Miami, and it takes pride in its historic downtown, the only one in the county.

Now its city council has approved a crosstown streetcar route for the city of 337,000 that will run right through the heart of that downtown.

The Orange County Register reports that the Santa Ana City Council voted unanimously Aug. 5th to approve a route for a planned streetcar line that will run from Santa Ana’s train station through the downtown to a new transportation center in neighboring Garden Grove, running mainly on Santa Ana Boulevard and a former Pacific Electric right-of-way. The downtown segment of the $238 million line would run west on Santa Ana Boulevard and east along Fourth Street, the heart of the downtown shopping district. The route will cost less to build than an alternate alignment that would have run on streets one block north in each direction.

Proponents tout the line as a catalyst for downtown development. Ryan Chase, whose family owns most of the buildings on Fourth Street, told the Register the streetcar would “bring a large amount of people and attention to the area … and create huge amounts of additional investment. It is the best way to showcase the heart of downtown.”

That’s what some local Latinos fear. Fourth Street is home to a number of Latino cultural festivals that some worry might disappear with the routing of the streetcar down the street. City manager David Cavazos assured the anxious that the streetcar would play nice with the festivals.

Cordoba Corporation, the project’s planning consultant, prepared a report last month that estimated about 20 percent of Santa Ana residents did not own a car. The route City Council selected is projected to have the highest ridership of the alternatives studied and serve the greatest number of transit-dependent households.

Chinese Consortium to Build U.S.-Mexico Rail Link
The governors of the U.S. state of New Mexico and the Mexican state of Chihuahua have embarked on a joint project to develop a master-planned bi-national community around the port of entry between Santa Teresa, N.M., and San Jerónimo, Chihuahua. The 70,000-acre community, the first of its kind in North America, will contain industrial, residential and commercial districts and build on two large existing facilities in the area: a new, $400 million Union Pacific intermodal rail yard in Santa Teresa and a 640-acre Foxconn manufacturing campus in San Jerónimo.

A key element of the planned community is a new international rail crossing to facilitate movement of goods between the countries and better serve the 2,500 acres of industrial land served by rail in the community. The International Railway Journal reports that the governor of Chihuahua, César Duarte, signed a letter of intent on July 31st in Beijing authorizing a group of five Chinese companies to build the community’s rail link. Work on the crossing should begin by year’s end.

The companies involved are the Chinese Development Bank, China Hyway, Quantum, QTriad, and Sinosure. The rail link is intended to relieve pressure on the nearby existing rail crossings between El Paso and Ciudad Juárez by providing a new access point to the Mexican rail network. The Santa Teresa-San Jerónimo border crossing is the easternmost land crossing of the U.S.-Mexico border.