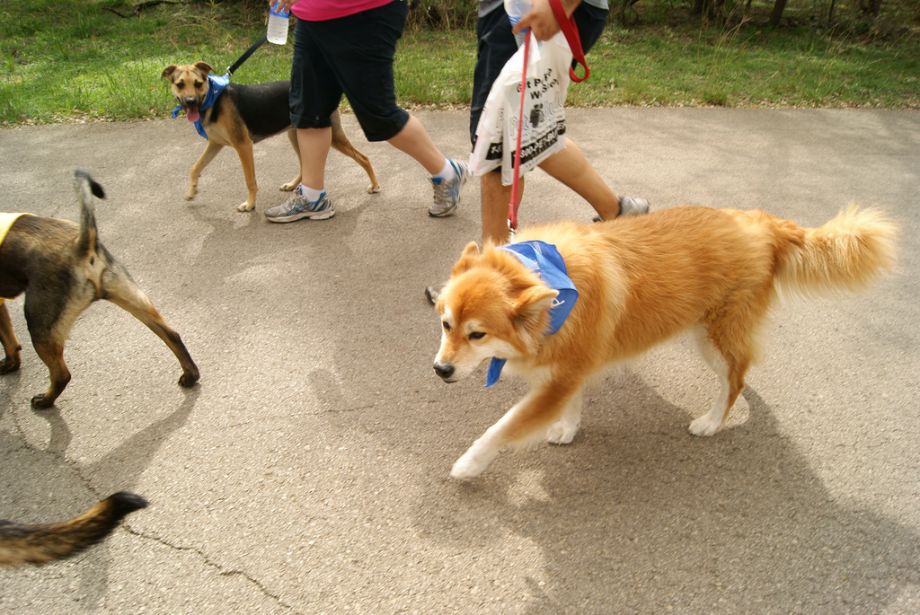 San Antonio’s dogs may soon have a new place to hang out. (Photo by MarkScottAustinTX)

One of the oldest parks in northern San Antonio, gifted by and named after the man who contributed the word “maverick” to the English language, could undergo a redesign that includes what supporters say would be a “world-class” dog park.

Three-acre Maverick Park is city-owned, but this isn’t a city project. Residents developed the proposal, which has garnered support from local stakeholders, including developers of new apartment buildings in the surrounding neighborhood of Irish Flats.

“A group of volunteers in the community had this idea because of all the growth San Antonio is experiencing,” says Noah Almanza, president and CEO of San Antonio Parks Foundation, a nonprofit dedicated to improving the city’s green spaces. The foundation is serving as a liaison between volunteers and the city, and managing funding on the project’s behalf.

Historically industrial Irish Flats has seen a boom in residential construction over the past decade, commiserate with the growth of San Antonio as a whole. Last year Forbes reported that between 2010 and 2013 San Antonio saw the greatest increase of any U.S. city in its millennial population. In 2015, the city ranked in a Forbes top 10 of population growth among U.S. cities overall.

Larry Clark, principal at Bender Wells Clark Design, a landscape architecture firm that founded the Friends of Maverick Park and created renderings for the redesign, says in addition to the hundreds of new housing units bordering Maverick Park today, the neighborhood can expect to add about 5,000 new units in the next 10 to 15 years.

“As a result of that, we know that we have a definite need for parks,” says Clark. “We know there’s a need for better community spaces that promote public health. We can’t have just dogs out everywhere, but we want healthy dogs and good neighbors who are less likely to create a nuisance with their dogs.”

Many of those neighbors have been advocating for the new dog park, says Clark. “The bigger challenge,” according to Almanza, “is having that public interest translate into actual giving.”

While San Antonio did approve an ordinance last month authorizing up to $50,000 from a tax increment reinvestment zone to fund the park’s redesign, volunteers and the Parks Foundation hope to raise the majority of the funding by alternate means.

Foundations, local apartment building companies and private donors have already contributed $137,700, and about 10 percent was crowdfunded, according to Almanza.

“Ideally we’d like to show 50 percent of the project being crowd[funded],” says Almanza. “That would create this testament to the idea that, hey, if you have a good idea the community can make it happen. You don’t need to go through all these processes. You can work with local agencies or entities to get a project in your neighborhood accomplished.”

The park still needs about $143,000 to start construction. If that happens, half of Maverick’s three acres will become the dog park, which will feature separate areas for large and small dogs, a terrain play area, a disc- or ball-throwing field, even agility equipment and a doggie shower. Future improvements might include adult fitness equipment and a new playground.

Clark says the redesign would also enhance the park’s stormwater management capabilities, adding bioswales and infiltration areas, butterfly- and pollinator-friendly plantings, and low-energy lighting. Almanza estimates construction would take eight months, and could be completed by the end of 2016.

Though the project is being touted as a victory for community-driven improvement, not all of the park’s frequenters feel they’ve been included in the process.

“Don’t get me wrong, I am a dog lover,” says Joan Cheever, founder of nonprofit Chow Train. “We love dogs so much that when we serve the homeless, working for the city of San Antonio at Maverick Park, we also serve the dogs.”

Every Tuesday night Cheever and the Chow Train feed homeless people at Maverick Park. Last spring, after 10 years of preparing food in her licensed commercial mobile kitchen, Cheever received a $2,000 citation for transporting the food in a different vehicle.

While the citation was ultimately dismissed, Cheever saw it as part of the city’s criminalization of homelessness, and its attempts to push marginalized people out of public view. She cites the 2014 renovation of downtown Travis Park, also donated to the city by Samuel Maverick in the late 1800s, a project Cheever feels was largely intended to discourage the homeless men and women who spent time there from using the space.

Still, Cheever says she’s optimistic about the redesign, and intends to continue serving food at Maverick during and after. She even wonders if the new dog park might create jobs for members of the homeless community. “There could be dog walkers,” she says.