Rutgers Business Teacher Has a Message for Youth of Color 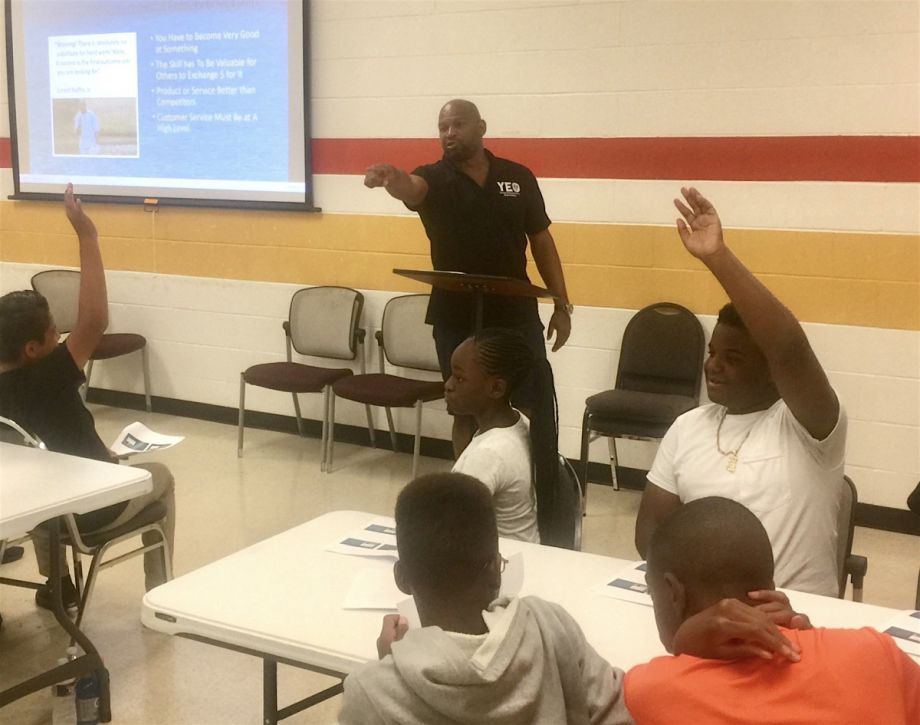 Start a burger stand. Expand a clothing boutique. Develop technology to assist people with visual impairments. These are just a few of the ideas that Ernest Ruffin Jr. has heard as he’s traveled around to U.S. cities promoting the message of entrepreneurship to young people of color and helping them with the practical side of their business dreams.

“These students are smart and innovative,” says Ruffin, who’s executive director of Young Entrepreneurz Organization, a nonprofit that teaches sixth- to 12th-graders about starting and running a business.

Ruffin has been working with youth since 2008, and he launched the YEO Business Plan Challenge, in Newark, New Jersey, in 2013. During a three-day training session, youth compete for cash and prizes, including up to $2,500 for startup capital. Ruffin took the model on the road for the past couple summers and has had events in Dallas, Baltimore, Oakland, Milwaukee and more.

YEO partners with local organizations with roots in the communities that Ruffin visits during his summer tours.

The Boys & Girls Clubs of Greater Milwaukee has partnered with YEO for two years. “The need is huge to get more of our young people to understand that they can be business owners in the hopes of having more startups here in the metro area of Milwaukee,” says Michael Waite, director of career development for the nonprofit.

In the Milwaukee sessions (where, Waite notes, attendance was 100 percent), participants learned how to draft a business plan, develop a marketing strategy and figure out financing for their dream company.

“The competition got pretty heavy on that Saturday afternoon and there were some pretty hard feelings at the end of the day, when some of those young people didn’t win the business plan competition,” Waite recalls.

Still, he expects that the challenge will provide inspiration to participants for years to come.

“It’s just another tool in their pocket to understand how to become an entrepreneur, how to be able to formulate a business plan and understand that there’s a huge possibility and opportunity for them to venture down that avenue should they choose in the future,” Waite says.

On the summer tours, Ruffin says he structures the lessons to connect to the youth. For example, when teaching marketing, he might ask, “How do you find out about Nikes?” That starts a conversation about social media, commercials and billboards.

Much of the year, Ruffin’s teaching students who are a bit older, at Rutgers University, and it’s those college courses that prompted him to create the summer challenge in Newark.

“I decided to target kids of color because my students at Rutgers University were having success starting businesses,” Ruffin says, noting that one student created two apps, one of which caught the attention of Mark Cuban, of NBA and Shark Tank fame. He had a student whose business was featured in GQ Magazine, and another who owns about 10 Schlotzsky’s deli franchise stores.

All of them had two things in common, says Ruffin, who adds that he’s happy for all of his students’ success.

The first is they credited what they learned in Ruffin’s classes for helping them in business. “The second was, they are all white,” he says. “I thought, how do I get more kids of color involved with entrepreneurship and economic development, and I wanted them to learn as early as possible, thus why we target sixth- to 12th-grade youth.” According to the last census, Newark’s population is 52.4 percent black and 33.8 percent Latino.

Ruffin’s former gig as an NBA agent is useful too. He tapped his connections in Milwaukee and this past summer, the Milwaukee Bucks donated swag bags to participants.

Ruffin has visited Milwaukee outside of his summer tour. Last fall, he met with youth in a Boys & Girls Clubs of Greater Milwaukee program that gives high school students an opportunity to attend college classes, tour a college campus, meet with faculty and staff members, and shadow current students. Waite says one of the youth involved plans to apply to Rutgers.

“We don’t get a lot of opportunities to expose our young people to eastern coast schools, especially Division 1 schools like that in the Big 10, so that was an excellent opportunity to expose that to our future collegians,” Waite says.

Ruffin plans to expand the YEO challenge in the future to include more cities and more cash support for budding entrepreneurs.

“I love working with young people and it connected with them so hopefully that translates to more success stories,” he says, noting that he’s currently running a fundraising campaign, called 1M for $1M.

In addition to teaching the youth how to develop their businesses, Ruffin encourages them to support one another.

He says he tells them: “You have to learn to pass the dollar back and forth,” explaining that it’s important for them to buy from businesses in their neighborhoods.