Why Cities Need to Stop the Eviction Cycle – Next City

Why Cities Need to Stop the Eviction Cycle

It’s a crowded courtroom in Milwaukee. Arlene pokes her head through the door, and whispers to get the attention of her landlord, Sherrena, sitting in the gallery. Like most people in the courtroom, both are black.

Sherrena steps outside into the hallway, and chastises Arlene by showing her a bill of her own, a tax bill for a condemned property, in the amount of $11,465.67. It is more than Arlene earns in a year. Sherrena goes back inside to wait. Arlene waits outside in the hallway.

The judge eventually hears Arlene’s case, and she admits to being behind on rent. But instead of receiving a formal eviction and ruling, Arlene is told she must pay the back rent, and the judge works out a deal for Arlene to move out before the start of the next month, eight days away (or else the court will hand down a formal eviction). Sherrena is eager to have a new tenant move in on the first of the next month and accepts the deal. She gives Arlene a ride home.

That was December 23, 2008. It was one of several forced relocations Arlene went through in the relatively short time Harvard sociologist Matthew Desmond spent living among eight Milwaukee families (some white and some black). His new book, Evicted: Poverty and Profit in the American City documents that period.

Historically, eviction has never been as frequent as it is today. In 2013, 1 in 8 poor renting families nationwide was unable to pay all of their rent, and a similar number feared eviction was imminent. In Milwaukee, a city of fewer than 105,000 renter households, landlords formally evict 16,000 adults and children each year. Numbers are similar for Kansas City, Cleveland, Chicago and other cities. Since many public housing authorities and private landlords consider past evictions to be a strike against prospective tenants, evicted families end up in substandard housing.

Eviction further negatively impacts school and work for families. Desmond documents how resulting depression can lead to poor work performance and losing one’s job. Children who constantly must change schools fall behind in the classroom.

“Add all that up, and it’s hard not to conclude eviction is a cause, not just a condition of poverty,” says Desmond, who also won a MacArthur Genius Grant in 2015.

In his attempt to understand the unprecedented rise in evictions, Desmond shadowed the two landlords of the families he features in the book.

He rented a room from Sherrena who, in the book, is often accompanied by her husband, business partner and property manager, Quentin. Altogether, Desmond estimates they netted around $120,000 in yearly income from their 36 rental units on the historically black North Side of Milwaukee. Sherrena also ran a credit repair business and a shuttle van business connecting residents to incarcerated loved ones. In one chapter, they had just returned home from a vacation in Jamaica.

“The ‘hood is good. There’s a lot of money there,” Sherrena tells Desmond.

Desmond details how Sherrena’s worst-kept properties yielded her biggest returns. Tenants, fearful of being evicted or of having city officials call child protective services about living conditions, are wary of complaining too much about disrepair. “Tired of a property,” she would let a building default on its mortgage and end up under city control. Defaults don’t hurt her financially because she registers each building as a separate LLC, essentially an anonymous shell company, which she can create easily online through the state of Wisconsin. When the building defaults, only that building defaults. Sherrena moves on. 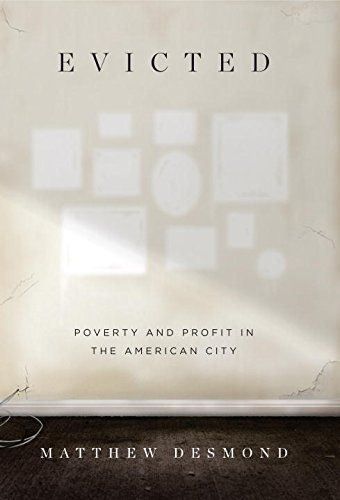 While Desmond shadowed both white and black families, his in-person research and later surveys show that, among Milwaukee renters, 1 in 5 black women reported having been evicted as adults, compared to 1 in 12 Hispanic women and 1 in 15 white women. In a typical month, three-quarters of people in Milwaukee eviction court were black, and of those, three-quarters were women. The total number of black women in eviction court exceeded that of all other groups combined.

Arlene’s first eviction was around 1992, when she was 22, and she figured she had rented 20 houses since turning 18. She had moved about once a year, more than one time because of an eviction. As her court case involving Sherrena demonstrates, many forced relocations don’t get recorded as formal evictions. In Desmond’s research, more than half of forced relocations in Milwaukee were informal evictions that don’t show up in official eviction statistics. Counting both formal and informal, Desmond estimates 1 in 8 Milwaukeeans experience eviction per year.

Having children doesn’t help — the opposite, in fact. Desmond’s research revealed that having children tripled the odds of a person receiving an eviction judgment, because landlords worried about children causing property damage, attracting police for nuisance complaints, attracting child protective services inspectors or testing positive for lead poisoning, among other reasons.

In Evicted, Desmond calls for some broad policy strokes, including a universal housing voucher program. Under such a program, everyone earning below a certain income level would get a voucher, and there would have to be strict enforcement against source-of-income discrimination of those using a voucher to pay part of their rent. There would also likely be some code enforcement reform and streamlining of inspections, in order to give voucher-holders real options, not just more concentrated poverty.

Desmond also covers legal assistance for tenants in housing court. Some 95 percent of landlords go to court with a lawyer, while 90 percent of tenants go without one. Since FY2014, NYC has increased funding for tenant attorneys in housing court tenfold, to more than $60 million. So far, formal evictions have dropped from 26,857 in 2014 to 21,988 in 2015.

“I think those conversations happening around NYC are very encouraging,” Desmond says. “It’s a potentially high-impact solution that could stem a lot of the fallout from eviction downstream.”

“I’m recommending Evicted to everyone I know. It’s essential reading for anyone who cares about poverty in America,” says NYC Council Member Mark Levine, who has been leading the charge to support legal assistance for tenants. Levine co-introduced a bill last year to establish a legal right to counsel for all low-income tenants in housing court. While 38 co-sponsors have signed on, no hearings have yet been scheduled to move the bill forward.