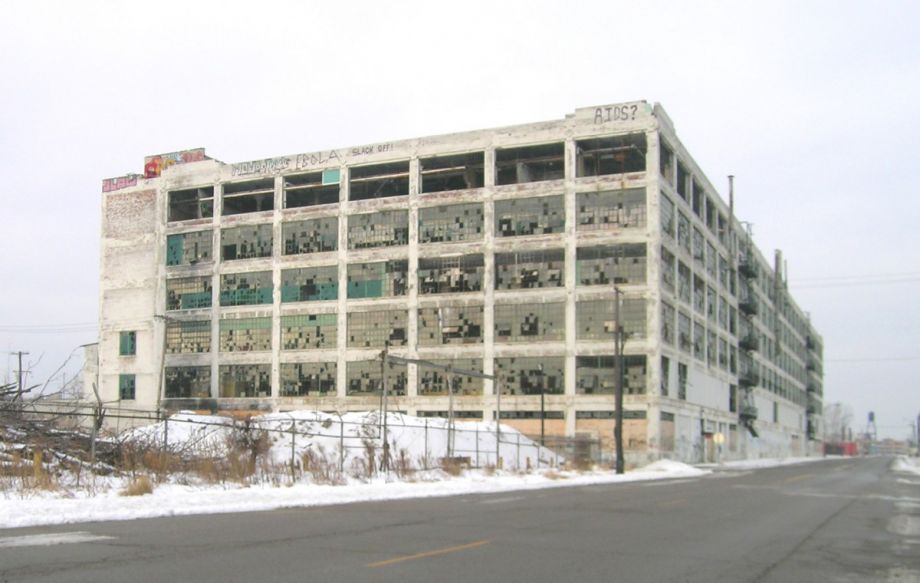 Detroit’s Fisher Body Plant 21 has been vacant since 1993. (Photo by Andrew Jameson)

Heading east along I-94 from Detroit’s resurgent Midtown area, two massive structures loom on the horizon. For passing drivers, they’re awe-inducing symbols of both the city’s former industrial might and the dismaying scale of its post-industrial challenges.

The Fisher Body Plant 21, vacant since 1993, sticks out above the I-94/I-75 interchange. At just over half a million square feet of floor space, the plant that once produced car bodies for Chevrolet and Cadillac cuts a striking figure. But it’s nothing compared to the Packard Plant 1.5 miles down the road.

With 3.5 million square feet of floor space in 47 buildings spread across 40 acres, the Packard Plant is Detroit’s largest vacant industrial site. Its immensity has baffled local leaders and residents who have been unsure what to do with the plant since it stopped producing cars in 1958. Over the decades, scrappers have dismantled whole sections of the Packard, making parts structurally deficient. Sections of the plant frequently catch fire, which costs the city over $1 million annually as estimated by Detroit’s fire commissioner in 2012.

Despite these challenges, Fernando Palazuelo, who purchased the Packard at auction for $405,000 in 2013, sees an opportunity. While Palazuelo’s plans for the site are vague (he told Crain’s Detroit Business in February that he envisions a mixed-use facility that will take over a decade to realize), he says he and his partners are committed to investing the time and money (estimated at $420 million) to transform the sprawling complex into a viable property.

Palazuelo isn’t alone. At the Center for Community Progress’ May Reclaiming Vacant Properties conference, planners and developers discussed examples from around the world of cities that are finding opportunity in derelict industrial properties.

Located in Pittsburgh’s Hill District, a largely African-American neighborhood with high poverty rates, the Connelley Trade School was emblematic of its neighborhood’s decline. Built in 1930, the 180,000-square-foot facility was once a center for cutting-edge trades-based education, but by the early 20th century, the building was mostly vacant.

That began to change in 2009 when Pittsburgh Green Innovators (PGH) brought together a consortium of nonprofits, businesses, labor unions and universities to form a new vision for the school. In 2014, the Connelley School was reborn as the Energy Innovation Center, a $45 million LEED Platinum hybrid research center and vocational school for the energy sector.

According to Thomas Bartnik, PGH executive director, the project was successful because of its multi-sector engagement. Ultimately, he said, a diverse group of organizations came together to create a neighborhood asset with regional impact.

Built in 1902, the Rotterdam Dry Dock Co. was the world’s largest pre-WWII shipyard. By 1983, however, the yard had become obsolete, the victim of changes in the shipping industry and the growth of container ships. The facility’s closure was a massive challenge for the Heijplaat section Rotterdam, especially the surrounding garden village housing development built for the families of stevedores and ship builders. The area would be challenged by the presence of the massive vacant facility for the next two decades.

Embracing the spirit of innovation that birthed the dry dock in the early 20th century, a group of stakeholders, including Rotterdam University, the Port Authority of Rotterdam and various economic development agencies, coalesced in 2004 to reimagine the shipyard. The planning process they started resulted in RDM Campus (Research, Design and Manufacturing), a redevelopment that has transformed the derelict dry dock into an innovation center and vocational school.

The campus, which features floating office space and state-of-the-art training facilities, allows tenant companies to connect directly with students enrolled at the vocational school, making RDM a hub of Rotterdam’s innovation economy. Additionally, the redevelopment has allowed residents to access the waterfront in their neighborhood for the first time in over a century.

“You have to be visionary and dare to take risks when you take on a project like this,” Gabrielle Muris, director of RDM Campus, said at the Reclaiming Vacant Properties conference.

“There’s an abundance of vacant industrial sites in Detroit. We happen to think that they are assets,” said Dan Kinkead, director of projects for Detroit Future City, a nonprofit dedicated to the implementation of a long-term planning vision for the city. According to him, there are 6.1 square miles of vacant industrial property in the city, about 4.3 percent of the city’s entire landmass.

With over 500 large-scale industrial buildings (defined as having over 25,000 square feet of floor space), Detroit may be the land of opportunity for those with creative ideas to redevelop unique industrial spaces. And those people are coming out of the woodwork.

Palazuelo is not the only foreigner to embrace Detroit’s post-industrial assets. Berliner Dimitri Hegemann, a man with a track record for redeveloping former industrial spaces into cultural assets, has expressed interest in Fisher Body 21. Hegemann drove the transformation of a vacant power plant in East Berlin into Kraftwerk, a space for nightclubs and cultural exhibitions. He is proposing something similar for Fisher Body 21, which he suggests can become a hub for the electronic music culture that Detroit popularized.

Hegemann’s is not the only idea for redeveloping Fisher Body 21. Earlier this year, Detroit Future City partnered with the Center for Social Impact at the University of Michigan’s Ross School of Business to solicit proposals for the site’s redevelopment. Fourteen multidisciplinary teams submitted proposals that included not just the what, but the how for redevelopment. While the ideas are not immediately actionable, DFC’s Chris Dorle said the work of these teams are important because they have created a safe space for local communities to think of these properties as assets instead of liabilities.

“We have a window of opportunity with these buildings,” said Kinkead. “They’re in areas with accommodating zoning and they’re tied to big systems. It’s time to think differently about what these spaces can be.”