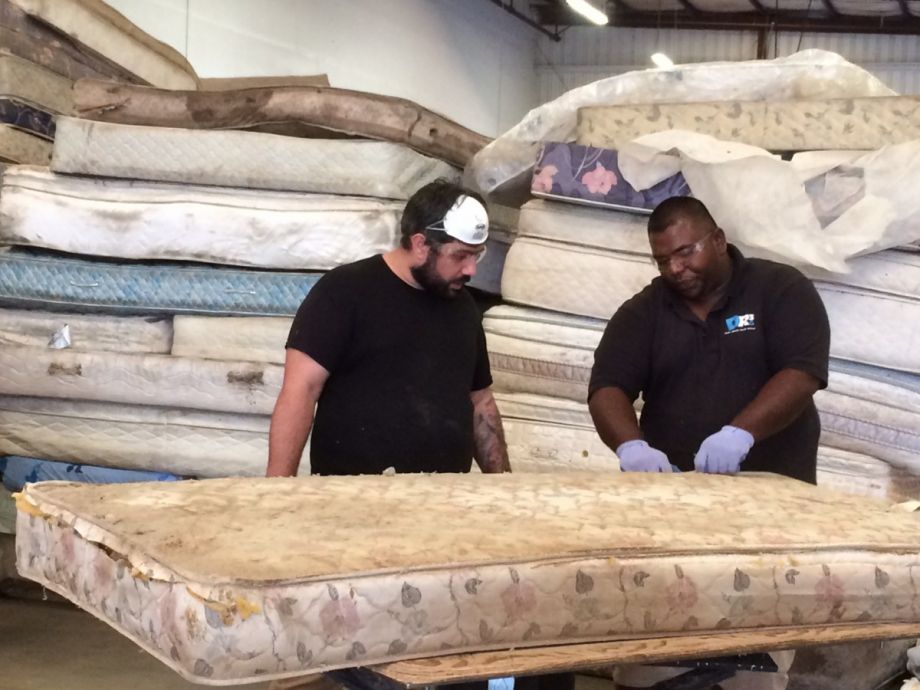 In a warehouse located in Eugene, Oregon, a worker scoops melted recycled glass from a 2,300-degree furnace. He pours it onto a table, where his assistant presses down into the molten glass with a decorative mold. They are making tiles to be sold in the on-site shop and tourist shops across the country.

About six miles away, in another warehouse, three workers sort through 16 thousand pounds of donated, used books, determining which should be sold and which should be pulped.

The warehouses belong to the human services nonprofit St. Vincent de Paul Society of Lane County. Susan Palmer, the nonprofit’s economic development director, says the waste management operation at St. Vincent of Lane County has three main goals: divert materials from the waste stream, create jobs for the local community, and generate revenue for the nonprofit. It’s working. In addition to books and glass, the nonprofit recycles mattresses and box springs — over 300,000 annually — employs about 385 people in its waste management programs, and brings in $21 million from these activities yearly.

St. Vincent of Lane County uses some of that revenue to fund its other activities – affordable housing development, emergency and homelessness services, and employment solutions like its job search center where people can get help with resumes, career counseling and interview tips.

“We’re not bound to our funders,” Palmer says. “Having our own revenue stream allows us to pivot to the needs of our community.”

St. Vincent of Lane County also, for the last six years, has been coaching other nonprofits around the country who want to start their own recycling programs. The nonprofit believes that these operations can be revenue-generators elsewhere as well as creating good jobs.

At St. Vincent of Lane County, says Palmer, career development is baked into its internal hiring and promoting processes.

“We don’t have a formal system, but rather a strong need for talented individuals to take on leadership roles as we grow,” she says by email. “Employees who show willingness to grow, a desire to work on our projects and be a part of our team rise up because we need them to.”

In 2012, the Robert Wood Johnson Foundation gave St. Vincent de Paul of Lane County a grant to help other nonprofits start their own materials recycling programs. That grew into the Cascade Alliance, an umbrella organization for St. Vincent de Paul’s training efforts.

“There is great untapped potential to employ more people in these jobs as more communities and companies adopt zero-waste goals that will make more materials available for reuse, upcycling and recycling,” Palmer writes.

Organizations that join the Cascade Alliance receive mentorship and guidance from St. Vincent. Each organization has to fund its own start-up operation, which typically costs $150,000 to $200,000, but St. Vincent has helped pay for a couple of the nonprofits’ smaller line items – a cash register for one, a $15,000 forklift for another.

At the moment, there are 14 Cascade Alliance members, including St. Vincent itself.

Greater Bridgeport Community Enterprises (GBCE), a Connecticut-based nonprofit, is a Cascade Alliance member that has had a relationship with St. Vincent since before the alliance was established.

Bridgeport is a depressed economic area, says Houël, who started GBCE with the intent to create jobs for the city’s residents.

“The issue of employment is the critical one here in Bridgeport,” Houël says. “And the focus here would be on trying to make sure that the unemployed, disadvantaged residents of the city would be able to have jobs, which has a very big economic [impact] for the communities and for their families.”

The city’s median household income between 2012 and 2016 was $42,113, according to Census data. That’s about $30,000 less than that of the state of Connecticut, which sits at $73,433. Bridgeport City’s unemployment rate was also about 2 percent higher than the national average in September.

Houël says one of the biggest challenges of starting Park City Green was money.

“It’s always a struggle to put together the kind of pool of resources that you need to be able to do real social ventures,” she says. “The biggest foundations do have some funds that would come in but they’re not going to come in until you really get off the ground and have your proof of concept together.”

Between 2012 – when GBCE also ran a construction program – through mid-2017, the organization employed 98 people. Houël says they employed 47 of them for 6 months or more and, of those, 32 of them for one year or more.

“One of our goals is to encourage employment stability which is one of the major barriers of the populations we work with,” she notes.

Houël worked in real estate development and marketing before starting GBCE and Park City Green. She says she used her network — including Terry McDonald, St. Vincent of Lane County’s executive director — to polish the particulars on the business plan for the mattress recycling venture.

Among those particulars, Houël had to decide whether to invest in more high-tech machines or go for hiring more people.

“So we’re obviously going to choose going for more people because that’s the purpose of our business,” Houël says. “Our mission is to employ people.”