Planning for a Public Housing Teardown in Louisville – Next City

Planning for a Public Housing Teardown in Louisville 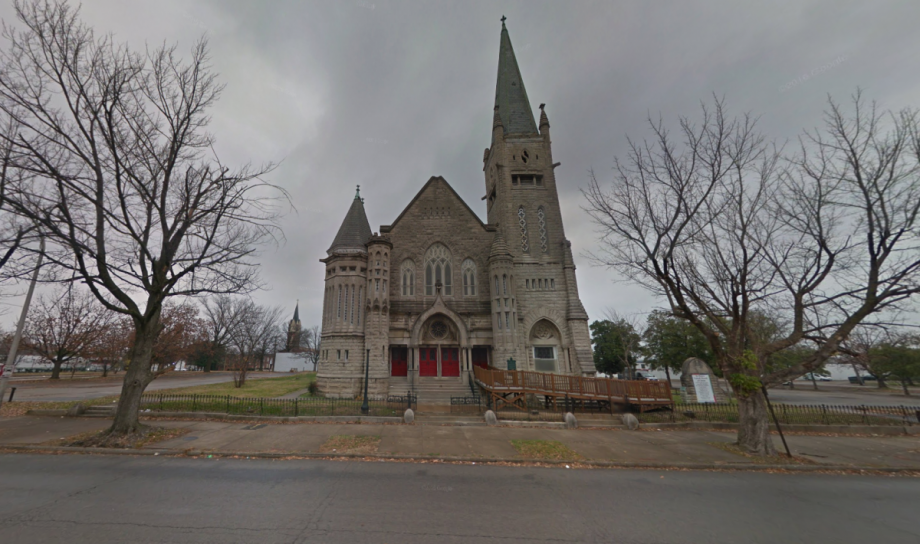 The Rev. Jamesetta Ferguson is the pastor at St. Peter’s United Church of Christ, in Louisville, Kentucky. About a mile west from the heart of downtown Louisville, the original 167-year-old church building sits across Jefferson Avenue from Beecher Terrace, the largest public housing complex in the county, with 760 units of low-rise barracks-style housing scattered across 32 acres.

“My great aunt, who was my namesake, lived right there in Beecher. I spent quite a bit of time there, and little did I know that this was where I would end up doing ministry some 40 years later,” Ferguson says. Annual median household income in the census tract that includes Beecher Terrace is $9,003. In the census tract immediately to the west, considered part of the same neighborhood, median household income is twice as high — though still far below that of the Louisville metropolitan area ($50,386). Beecher Terrace’s census tract is also 90 percent black, compared with 14 percent black across the entire metropolitan area.

A 2014 PBS “Frontline” special on mass incarceration in Kentucky reported that around one in six Beecher Terrace residents cycle in and out of prison a year. As mass incarceration rates went up across all of Kentucky from 2000-2009, crime didn’t go down — but communities were pushed deeper into poverty by the disruption of education and jobs.

Now the city wants to tear down Beecher Terrace, and replace it with mixed-income, mixed-use development as part of the gradual expansion of downtown Louisville. Current residents are torn, understanding the need for more housing in a more dynamic setting but also wary of displacing public housing residents who lack other affordable options. (That’s happened before in Louisville.)

Amid that perfect storm, St. Peter’s recently had to face its own crisis. The original church building still faced closure and demolition in the summer of 2014, when the congregation decided it was too dangerously in disrepair and too expensive to rehabilitate and maintain. After moving the congregation to a temporary space at a strip mall one block west, Ferguson reached out to the United Church of Christ’s Church Building & Loan Fund (CB&LF) for help.

CB&LF works nationally to assist new and renewing Christian churches of any denomination with loan programs, capital campaign services, planning and technical assistance programs. They claim to be the oldest church building loan fund in the U.S., tracing their roots back to 1853, through repeated mergers across multiple denominations.

St. Peter’s became the first partner in their planning program. Rather than a loan for facility repairs, the fund connected church reps to resources that could help them craft a plan to leverage a key asset: the property.

“Churches in the U.S. have billions of dollars in assets. With the number of churches that are closing, we think about what’s happening to those assets,” says Patrick Duggan, executive director of CB&LF. “We want to reinvent the concept of church to basically stand against poverty.”

The new St. Peter’s plan centers on building a two-story retail and office building in what is currently the main parking lot of the church property. The eventual rental income from that development would fund the rehabilitation and maintenance of St. Peter’s original church building, with what’s left going to support church programming. They expect to break ground on the new building later this year. St. Peter’s estimates the total cost to be $7 million, with 70 percent of that coming from CB&LF.

“Our pitch will be that we are within one mile proximity of downtown, that downtown is extending west, and we are right there in an area that will complement that growth,” Ferguson says. They hope to attract small businesses to employ those in the neighborhood, as well as provide essential services.

Meanwhile, Chef Space, a new food enterprise incubator, just opened in the neighborhood. Separately, a new $10 million incubator is now open on the other side of Beecher Terrace, run by Louisville Central Community Centers.

The new building at St. Peter’s will include space for more comprehensive programming to address the unique challenges of its neighborhood. That includes a workforce development program focused on helping formerly incarcerated individuals get jobs, and one to connect them to affordable housing in the area.

St. Peter’s already works closely with Community Transitional Services (CTS), a halfway house and re-entry program for parolees released from the Kentucky Department of Corrections. Besides attending worship services and other programs at St. Peter’s, CTS residents are also key volunteers for the church, particularly in its food pantry program that distributes around 160,000 pounds of food to 13,000 people a year.

“As these men and women are moved out of Beecher once it is demolished, many of them have no credit, or they need their credit repaired in some way or another,” Ferguson explains. “We currently estimate it takes about 24 months for your credit to be repaired to a level that you can have adequate chance for ownership or rental, so our goal is to start now.”

While all that is going on, Ferguson continues to serve on the Russell Choice Neighborhood Task Force, the group of community leaders convened by the city housing agency to incorporate community input into the planning process for what to do with the planned demolition and replacement of Beecher Terrace. While resources within the community are strong, many people have operated in silos.

“[We] want to … make sure people know these resources are there,” Ferguson says. “If you don’t know, you feel like you’re just isolated and no one cares, and that’s not the case.”