Pittsburgh Moves to Safeguard the “Public” Art It Doesn’t Own 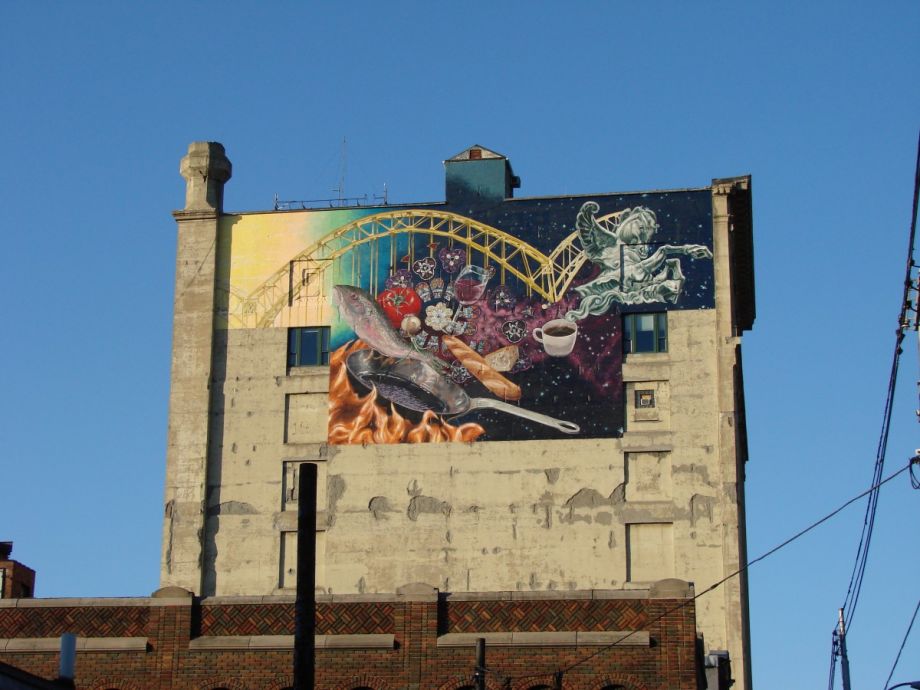 For more than three decades, a 27-foot kinetic sculpture by artist George Rickey has swayed over a sidewalk in downtown Pittsburgh, apparently a fixture of the city’s streetscape.

However, the sculpture never really belonged to Pittsburgh taxpayers. “Ls – One Up One Down Excentric” was commissioned by Oliver Tyrone Corp. and the National Steel Corp. at 20 Stanwix Street, the former National Steel Center, where it was installed in 1982. Chicago-based real estate firm M & J Wilkow became the sculpture’s new owner when it purchased the property last year.

So when M & J Wilkow decided to put “Ls” up for auction, there was little Pittsburgh could do to safeguard it from abruptly leaving town. In mid-May, the sculpture was sold in a Sotheby’s auction for $310,000, and will likely be moved out of Pittsburgh, the Pittsburgh Post-Gazette reported.

“Some people are really heartbroken,” says Renee Piechocki, director of Pittsburgh’s office of public art. “There’s not going to be more George Rickey [sculptures] in the world, he passed away. I think it’s really a loss.” (M & J Wilkow did not respond to requests for comment on this story; Sotheby’s declined to comment.)

This situation will sound familiar to many other cities across the U.S. In Chicago last year, a historic but deteriorated mural on a church was painted over to the dismay of the local community, after the financially strapped church couldn’t find funds to restore it or a buyer who would. In 2013, the owners of 5Pointz, an iconic “graffiti Mecca” in Queens, New York City, unceremoniously whitewashed the structure before knocking it down to make room for apartment buildings.

Similar incidents stretch back decades. An Alexander Calder sculpture called “Eagle” was one of Forth Worth, Texas’ most iconic features, until it wasn’t; after the sculpture and the property it sat on changed hands several times, in 1999 an investment group moved it out of town in attempt to find a buyer. Seattle famously almost lost an iconic downtown Henry Moore sculpture in the late ’80s when its owner decided to sell it to a Japanese buyer. The sale sparked significant public outcry, and the sculpture was only saved after the Seattle Art Museum helped work out a deal to keep it in place. (Incidentally, the Seattle Art Museum’s Olympic Sculpture Park is ultimately where Calder’s “Eagle” wound up.)

Following the sale of the Rickey sculpture, Pittsburgh is looking to prevent another piece of privately owned art from disappearing off of its streets in this way. Mayor Bill Peduto’s administration is currently considering possible strategies and mechanisms to ensure the longevity of privately owned artwork in Pittsburgh’s public sphere.

But if the artworks in question are privately owned, what role, exactly, can a city government play?

Kevin Acklin, Peduto’s chief of staff, says their office’s first step will be to create an inventory of the privately owned art pieces within Pittsburgh’s public sphere. This includes privately funded murals and many artworks that have already been in the city for decades.

Next, the city will reach out to owners “in a strategic way,” Acklin says. The goal would be to “invite a conversation about having some sort of a commitment, so that we’re not in a situation that we were with the Rickey piece.”

There could be an agreement with owners to give the city an option to acquire art in the case of redevelopment plans on the property or a potential sale, Acklin says. At the least, owners might agree to provide advance notice of any such plans or changes. Pittsburgh would likely have to offer some incentives for these commitments, such as partnering with owners to provide maintenance of the artwork in question, he adds.

While Acklin notes that this strategy relies on the “goodwill” of individual owners, he resisted the idea that the city is pursuing a piecemeal, artwork-by-artwork approach.

“We are looking to have a comprehensive understanding of what privately owned art is in the city that’s in the public eye and to have an approach to reaching out to the owners,” he says. “Our hope is that if we’re able to reach out to and have a conversation and perhaps an agreement with even a portion of [the owners of] these pieces we identify, then we’ve advanced the social equity value of public art in the city of Pittsburgh.”

Acklin wasn’t immediately aware of feasible legislative options, but didn’t exclude that as an option. As the administration continues its inventory and discussions, “we can evaluate whether this is something we want to pursue legislatively or if we’re comfortable with this being a voluntary program,” he says.

Piechocki, who has been in contact with Peduto’s office regarding this strategy, says their focus isn’t necessarily limited to securing existing artworks, but also making sure that if a piece is sold, there isn’t a cultural net loss for the city.

She cites as a template the renovation of Pittsburgh’s K&L Gates Center at One Oliver Plaza, when murals by Pierre Soulages and Virgil Cantini were removed but replaced by new art, including publicly accessible Cerith Wyn Evans light installations at the building’s lobby. The Cantini also stayed in town, relocated to the University of Pittsburgh.

“I understand a developer wanting to make an aesthetic change,” Piechocki says. “I think [we are] looking at all these different options so no one feels stuck.”

Todd Bressi, a public art consultant for the public and private sector, pointed to the Visual Artists Rights Act of 1990 (VARA) as another route Pittsburgh might pursue in cases where the artist is still alive.

VARA is a section of U.S. copyright law that protects artists’ “moral rights” regarding modifications to their work, regardless of who the owner is.

“It’s important to recognize the artist is a party to this,” Bressi says. “One step [the city] could take is to contact the artist and ask the artist, ‘what are your intentions here? What are your thoughts? Would you help us negotiate with the owner?’”

At its core, a strategy regarding the sustainability of existing private “public” art could be a useful tool for a city like Pittsburgh, where much of the art in the public eye is privately owned, Piechocki says.

The majority of publicly accessible artworks in Pittsburgh’s downtown are funded through private dollars, according to Piechocki.

“There’s a very, very strong history of art in the public realm that is funded through private money,” Piechocki says. “We’ve been doing it for a very long time, and now we need to up our game a little bit.”

The prevalence of privately owned “public” art is not unique to Pittsburgh. Peduto’s strategy arrives as many cities are increasingly relying on private dollars to fund publicly accessible spaces and artworks.

“I think Pittsburgh could actually break some significant new ground here,” Barbara Goldstein, a public art and creative placemaking consultant, says. “I think that this is going to become more and more of an important issue for cities to tackle as we see more and more privately owned public open spaces.”

Some cities across the U.S. have programs that require developers to fund publicly accessible art in certain scenarios. Such programs have sprung up recently in Oakland, California (to uproar from the real estate world), and Indianapolis, Indiana, while others including Philadelphia and Los Angeles have had them for decades. There are a number of ways these programs might be designed, but they typically involve mandating that a certain percentage of a developer’s project funds go toward public art, sometimes in exchange for benefits such as zoning changes or tax abatements.

Because the artworks created through these programs are specifically commissioned for the public’s benefit, they also typically come with rules regarding their maintenance and sustainability (although, as Bressi notes, those rules aren’t always airtight and sometimes owners aren’t even aware of them if the property has changed hands).

However, looking at artwork that wasn’t necessarily created for a public benefit, as Pittsburgh is doing, has a particular set of challenges.

“It’s really hard to create an agreement after the fact,” Goldstein says.

When it comes to incentivizing any art-related commitments, cities would need to figure out how that incentive would apply to potential future owners, says Goldstein. Meanwhile any agreement to share maintenance funds as an incentive could get “tricky,” she adds, because the city would need adequate funds to keep that agreement.

“It’s a really, really interesting challenge,” Goldstein says. “It would be phenomenal if Pittsburgh developed a strategy for dealing with those spaces.”

Of course, just because a property owner decides to put up a piece of art doesn’t mean it should necessarily stick around forever. Some pieces might be deteriorated beyond repair, might not hold up artistically through the years or might just be poor quality, Goldstein says. She suggests that Peduto’s office should keep this in mind while pulling together its inventory.

Bressi also notes that, to a certain degree, a shifting landscape and the occasional loss of local features is “just the nature of cities.”

“I think a lot of us just assume that [when] someone commissions a piece of art and they sell it, that’s life,” he says.

For now, Peduto’s office is still in discussion mode. According to Acklin, the next “couple of months” will involve completing the art inventory and reaching out to owners.

“[It’s] about inviting partnerships with private owners of public art who want to be a part of keeping that art as part of the long-term fabric of the city,” he says. “It’s a positive, collaborative conversation that we intend to have.”