How Should a City Go About Adding a New Museum? 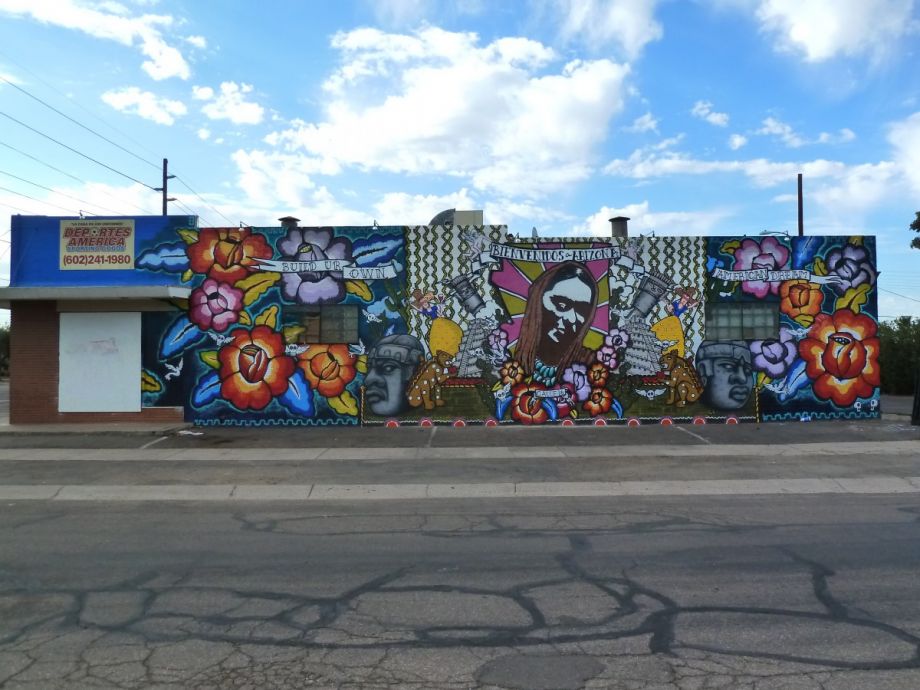 “Bienvenidos a Arizona” mural in Phoenix (Photo by Chris English)

The city of Phoenix is considering opening a new Latino arts and culture center, but what exactly that means, where it might be located, and how it might sustain itself are all up for debate.

A group of city leaders and arts organizations have pushed for years to open a space dedicated to Latinos’ cultural contributions. Now, the city is considering using $1.4 million of bond funding originally approved by voters for the now-defunct Museo Chicano to make it a reality.

First though, a lot of questions: Do residents want a space for exhibition? Or for art-making? Will it only offer cultural resources? Or other services, like help with immigration law, that are relevant to the Latino community? Will it be a new building, or a retrofit of an existing one?

With the help of a consultant and input from three town halls and an online survey, the city is now trying to determine the answers to some of those questions. “When [the city] approached me they said, look this is an exploratory process,” says Evonne Gallardo, the California-based consultant who also serves on the National Board of Latino Arts and Culture. “Even though we are just starting to look at this possibility and everything is still in development, it was important to me that this very broad engagement happen, whatever the outcome might be.”

At the first town hall, held in mid-April and attended by about 100 arts administrators and community members, Gallardo says it was clear that residents want a place to make art, not just to see it.

“The growing trend is that people want to participate and engage in whatever art discipline that they like,” she says. “That’s what we heard at the first town hall. It was less about ‘I want to see this,’ and more, ‘I want to do this.’ We’ve also heard that this center should be multidisciplinary. It should be a flexible space, it should be an expansive space, so to speak, so really having the goal of inclusion in that broadest sense.” Over 41 percent of Phoenix residents identify as Latino, but those surveyed have said they want the space to welcome all.

“Having a dedicated center would allow people from other backgrounds and cultures and religions and countries of origin to learn about this rich cultural heritage of the Latino and indigenous people,” Wilde says. The center is likely to overlap somewhat with Xico’s programming, but will serve a wider role, she says. Xico focuses mostly on printmaking and education, while the center may encompass a much broader array of disciplines. Wilde sits on an advisory committee giving input on the effort.

“People definitely want a lot from this center,” she says, reflecting on the first town hall. “The biggest thing I kept hearing over and over is accessibility.” People want bilingual services and afterschool programming for youth. Wilde was excited that, at the town hall, the city offered headphones to Spanish-speaking residents so they could listen to translations of Gallardo’s remarks in real time.

Another town hall was held on April 20; the third and final will be April 22, and in early May residents will be able to weigh in by online survey. After that, Gallardo will prepare three models for how the center might be built.

In the first town hall, she heard a strong desire for the center to be located downtown. Wilde says she heard excitement about the possibility of a brand-new space that would be recognizable as a cultural asset outside the city, like the distinctive design of the new National Museum of African American History and Culture in Washington, D.C.

Arts have begun to drive development on Phoenix’s Roosevelt Row, a downtown arts district named a “Great Place in America” by the American Planning Association in 2015. Now condos and apartments are popping up along Roosevelt. “I think that’s evidence that’s showing the arts are driving economic growth down here,” says Wilde, who grew up in the Phoenix suburbs and has watched the arts scene burgeon in recent years.

She sees a need for the new cultural center, but still has some questions about it: Will it provide additional services relevant to the Latino community, or stick to arts and culture? And how will it work with existing arts groups?

“I would like to know what the city or what the consultant is thinking in terms of proposed partnerships with these Latino arts and culture organizations, like Xico, that already exist. How can we work together? Because I think especially right now, we need to work together,” she says.

How the center would support itself must also be resolved. The $1.4 million bond would be used to launch it, but the goal is for financial independence. Gallardo says she’s exploring multiple options, from a traditional nonprofit model to a more entrepreneurial approach, but the details haven’t been worked out.

Gallardo expects to complete her feasibility study and capital needs review in June.