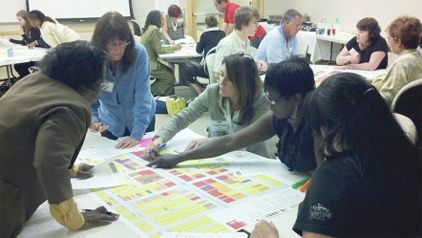 The new zoning code was designed to update decades old guidelines that were widely regarded as archaic and inefficient. Photo credit: CPI

The Philadelphia City Planning Commission has been selected to win the American Planning Association’s 2013 National Planning Excellence Award for Best Practices, in recognition of its recent zoning reform process. The “Best Practices” category examines “a specific innovative planning method or practice that yields lasting values in the community,” and recognizes the intensive public engagement undertaken by the Planning Commission, which heavily shaped the resultant, modernized zoning code, implemented last August after a four year process of public meetings and discussion.

As part of its strategy to encourage public engagement, the Planning Commission established the Citizen’s Planning Institute in 2010 to train a corps of “citizen planners” to guide community meetings and reconcile neighbors’ dreams with realistic zoning practices and technical requirements. In addition to providing a pipeline for new ideas, the CPI helped smoothed the transition to a new zoning code, reducing shock from the first total rewrite in 50 years. The Institute is still active, with 145 members operating annual zoning workshops to better educate the public about the nuanced regulations and codes that define the city’s built environment.

Greater recognition for Philadelphia’s zoning reform process, which was previously recognized with the American Institute of Architecture President’s Award in 2012, comes as the popular, new code comes under pressure from Philadelphia’s City Council, which seeks to soften its impact by changing some nascent protocols. Sparking public outrage and criticism from the Planning Commission for tampering with the largely citizen-created code after only a few months of practical implementation, Council was eventually compelled to curb its far-reaching aim of altering zoning guidelines to encourage lower-density and more autocentric development. Since then, the code — a pillar of Mayor Michael Nutter’s attempt to build a legacy of progressive, environmentally-friendly development practices for his administration — has continued to be the target of Council amendments.

Tomorrow, the Planning Commission will hold a public discussion#, featuring Deputy Mayors Alan Greenberger and Michael DiBerardinis, along with Chief of Staff Andrew Stober, to reflect on the reform process and update the public on progress since the overhaul. The sold-out event, hosted by the Center for Architecture, will also focus on “Philadelphia2035”, the city’s long-term planning strategy.

The Best Practice award will be presented to representatives from the Commission at the APA’s National Planning Conference in Chicago on Tuesday, April 16, 2013.