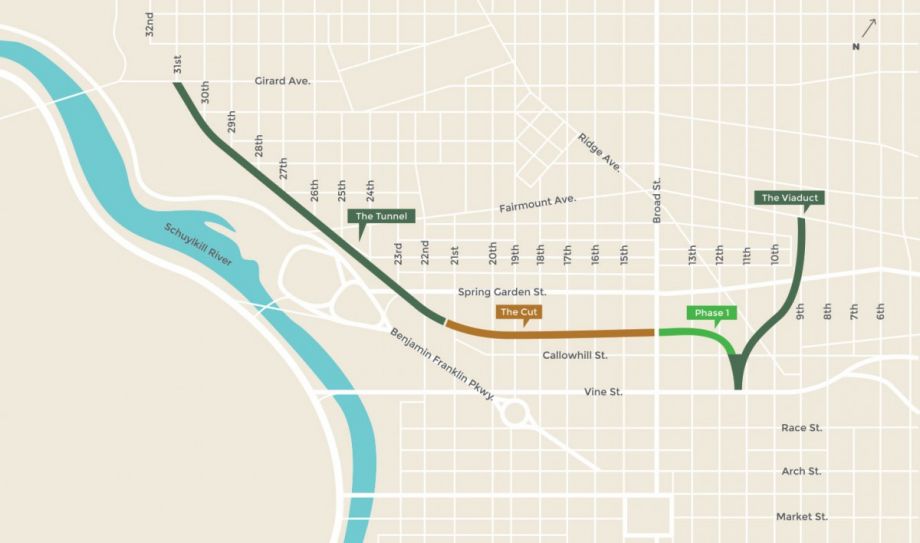 Philadelphia officials cut the ribbon on the first phase of its elevated Rail Park, a quarter-mile of public green space in downtown Philadelphia, on Thursday.

The park — a rails-to-trails project similar to New York’s High Line, but (planned to be) twice its length and width, Friends of the Rail Park notes — runs along the Reading Viaduct rail line, which was built in the 1890s, Curbed Philly reports. Plans for the park kicked off in 2010, but groundbreaking had to wait until 2016. Since then, the opening date has been pushed back several times, most recently because a 130-year-old pedestrian bridge slated to serve as the main gateway to the park was found to be corroded and unsafe.

Officials finally opened the first phase of the park Thursday. When the entire park is complete, it will be a three-mile greenway stretching 20 blocks along the Schuylkill and through the Callowhill neighborhood.

Callowhill, once a blighted part of the city, is undergoing a building boom, and the park is likely to attract more investment. “It will serve as a stimulus for residential and commercial development,” Philadelphia Mayor Jim Kenney said Thursday, according to Curbed.

That sits fine with many residents. As the news site BillyPenn reports, much of the development is not coming in the form of replacements for old housing (and long-time residents) with new, but instead targets the area’s vacant lots.

With the park’s opening, “there’s going to be an uptick probably in property values around it,” Dr. Jeffrey Doshna, a professor of city, transportation and regional planning at Temple, told BillyPenn. “But property values in that neighborhood were very low to begin with. So some increase in value…some reinvestment in the neighborhood is good.”

Pennsylvania’s Department of Community & Economic Development Secretary Dennis Davin said that the park might attract businesses, among them “one that begins with ‘A’,” Davin said, according to Curbed, making a not-so-oblique reference to Amazon and Philadelphia’s place on Amazon’s HQ2 shortlist. (Separately, Philly’s city council added an exemption for all “Keystone Opportunity Zones” from a proposed 1% tax on construction, which includes the three sites the city pitched Amazon, the Inquirer reported Thursday.)

The park is seeded with 11 types of trees and 1,000 plants, primarily native grasses, shrubs, and a few flowering plants to fit naturally into its surroundings, the Philly Inquirer noted. It also offers swings, public art, and 360-degree views of the city.

There’s no official timeline for the construction and opening of the rest of the park.