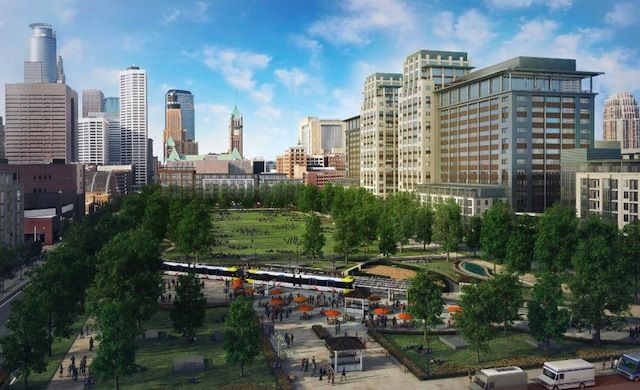 A rendering of the East Downtown development. Credit: Ryan Companies

Downtown Minneapolis is set for a huge redevelopment in the shadow of the Minnesota Vikings’ new, $1 billion stadium. On Friday the city council voted unanimously for the $400 million Downtown East project, a mixed-use development which will also include new green space.

This last part is a sticking point. A proposed 4.2-acre park, called The Yard, and a 1,625-spot parking garage would be financed through $65 million in city-issued bonds. A lawsuit filed last week argues that this violates state laws for the stadium’s public funding, which capped infrastructure improvements at $150 million. The Yard and adjacent parking lot, the lawsuit argues, fall under that umbrella and push it over the $150 million threshold.

City Attorney Susan Segal disagrees. Revenue from the parking ramp would repay the bonds, according to the Pioneer Press. There is a hearing on Wednesday to decide its fate.

Along with the new stadium, set to open in 2016, the project could transform downtown Minneapolis. In addition to the new park and parking garage, Downtown East will include retail, apartments and office space. Supporters call it the biggest redevelopment in the Twin Cities in 20 years. Wells Fargo intends to invest $300 million and move roughly 5,000 employees into two office towers downtown.

Ryan Companies, the Minneapolis-based developer, will handle the commercial and residential space, as well as pay any budget shortfalls not covered by parking revenues in the first 10 years.

The Yard, which will be similar in size and scope to New York’s Bryant Park, would come as a welcome sight in Downtown East, an area now short on parks. But as Streets.MN wrote last week, “By far the most important piece of a successful park is not its design but rather its programming.” The Yard will host tailgaters during Vikings’ home games, but it can’t just be a bunch of guys wearing purple and yellow chugging High Life on Sundays. The city needs to think about ice rinks, potential vendors, concert series, festivals — the sort of programming that makes it a destination 365 days a year.

An excellent op-ed in the Star Tribune highlights the project’s potential to boost tax revenues.

Mayor R.T. Rybak cites city estimates that over 30 years the project will generate $42 million in property taxes for the city, $50 million for Hennepin County and $35 million for the Minneapolis public schools. Based on that kind of return on a relatively modest investment with reasonable risk for taxpayers, the project is a clear winner.

The construction is expected to take three years. Meanwhile, the Central Corridor light rail line, set to open in the summer of 2014, will give 5,000 employees and new tenants better access to transit.

But the key to this development is making sure it’s not just a mecca for football fans and commuters shuttling from the parking garage to their Wells Fargo office. The programming has to be robust and, as many have argued, year-round. Otherwise we’ll end up with office towers empty at closing time and a park filled only on game days.