Paint the Town with Data in Boston’s New 3D Model 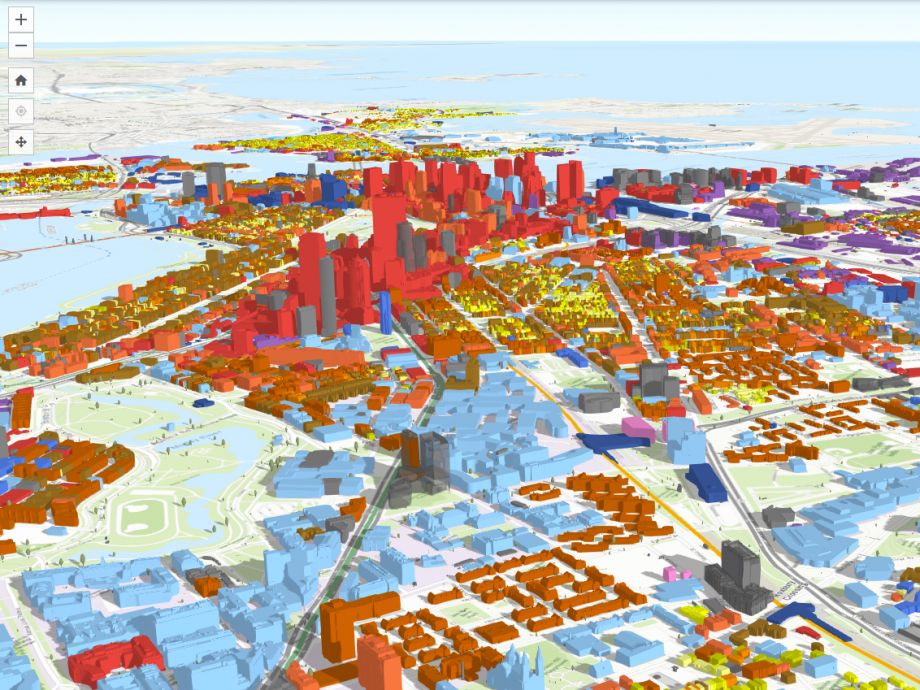 Last year, a bitter battle arose over a proposed 775-foot downtown tower whose shadow would extend over historic Boston Common. A state law on shadows had to be changed to allow it, and the project eventually gained approval from the Boston Planning and Development Agency. (The developers have since revised the plan to satisfy the Massachusetts Port Authority, which operates the nearby Logan International Airport, slightly reducing the height of the tower.)

According to agency director Brian Golden, the controversy over the tower’s long shadow came as an “unwelcome surprise” after proposals were submitted. The shadow dispute helped spur the agency to develop greater capacity to perform its own analyses, earlier in the process. That included developing a 3D smart model, providing an interactive, detailed view of some 129,000 buildings across the entire city. As of this month, it’s freely available to the public.

Officials say the digital tool will not only aid the agency in its internal planning and increase transparency in the development approval process, but also allow ordinary residents to inform themselves on existing land use, building heights, shadow effects and flooding projections.

“There can be antagonism when we engage communities, because it’s not clear to the outside world what we know and what we’re thinking,” Golden said at a press event unveiling the tool. “Adding this sophisticated tool allows the public to see what we see, increasing transparency.”

By selecting various layers, users can alter the map to show zoning districts, trees, buildings by land use, transit lines, and points of interest such as schools, health centers and supermarkets. The 3D map is divided into one-kilometer squares that can be downloaded for use with design-oriented software such as AutoCAD and SketchUp, but much of the functionality is accessible with nothing more than a web browser. A ruler tool enables measurement of the dimensions of existing and some under-construction buildings, and a daylight slider reveals where shadows will fall at various times throughout a day and over the seasons.

Boston is among the first cities to present such a model and to make it publicly accessible. (San Francisco also has one) What’s groundbreaking, said Carolyn Bennett, the agency’s GIS manager, is integration of a 3D model with other GIS data layers such as development review and zoning, along with incorporation of information from other city departments and models from architects and developers.

The map available to the public doesn’t include developments for which construction has not begun, but an internal version lets planning agency staff see proposed buildings as well. Potential uses of the new model, officials said, include being able to show proposed projects and alternate scenarios at community meetings where development plans are presented and discussed.

One of the most up-to-date pieces is a street flooding map showing the specific downtown, Seaport and East Boston streets that took on water during the heavy rains and high tides of early January 2018.

David Queeley, eco-innovation director at Codman Square Neighborhood Development Corporation in Boston’s Dorchester neighborhood, has taken an initial look at the new model’s base map, flooding maps, and some of the features reflecting data from a 2016 citywide community energy study. The model’s topography lines could be valuable for planning project locations in flood-prone areas, he says, and maps indicating potential community solar projects are of interest, so long as they prove to be accurate and current.

Queeley and others say they see potential for the model’s public use and benefit, but also noted room for improvement in such areas as sufficiently updated information, additional features and user-friendliness.

Kay Mathew, who co-founded a grassroots group working to save mature trees along a boulevard slated for a major street redesign, sees the tool as useful for CDCs and neighborhood groups, but suggests that most citizen users would need some training to access it fully.

“The concept and the hope for it is great, getting more information to neighborhood groups working with the city around development or road design projects,” she says. “My feeling is, there needs to be some technical assistance. If it’s accessible to everyone, that’s useful.”

As of now, the model’s base map is current as of February 2017. Larger developments now under construction have been added, but some smaller ones — often the subject of intense community interest and debate — are not yet visible.

Bennett says she will be adding further description of the 3D model to the website more information on how to use it. In addition, she said the planning agency is working now to update the model to be current as of Spring 2018. While the agency is not promising the tool will be able to show development in “real time,” they are developing a process to update the model every six months or so, according to Bennett.

Meanwhile, it’s not too soon for neighborhood groups to study existing buildings and agency-owned land parcels, and for wedding photographers and picnic planners to start poring over exactly what time to expect shadows over the Boston Public Library courtyard or the Rose Kennedy Greenway on that early summer weekend.