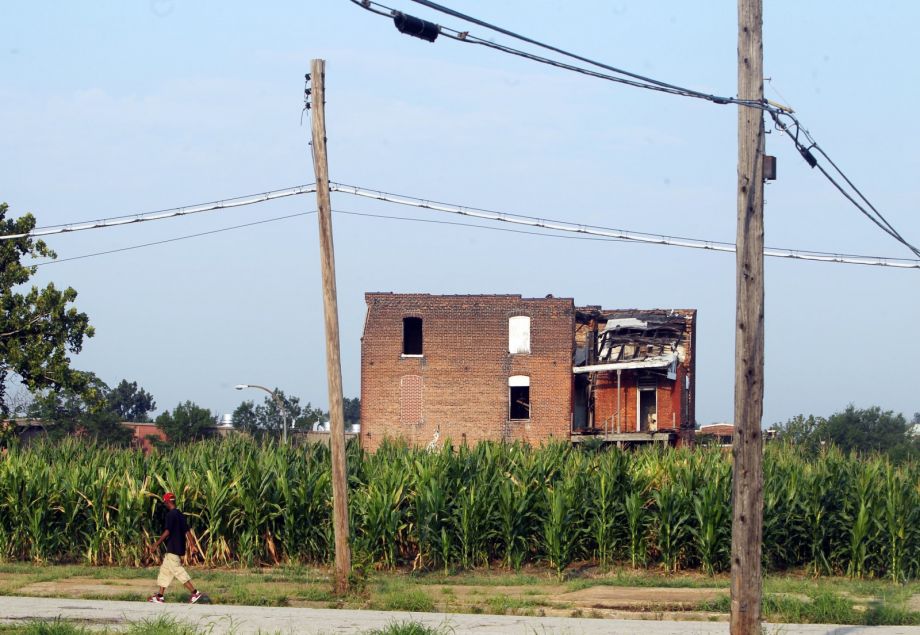 The LRA already owned many of the vacant parcels that Paul McKee has bought up for his NorthSide Regeneration project. Credit: Laurie Skrivan

Reading Tim Logan’s Forefront story on the lifespan of the massive NorthSide Regeneration project in St. Louis, one is reminded of how long the effort has persisted. While acquisition did not start until 2003, developer Paul J. McKee, Jr. has said that the idea for NorthSide is older than that. To some, the lack of development so far indicates a failure, given the decade-long timeframe and millions of dollars in specially created tax credits.

However, the project is a stunning success — as a privatized land bank. Even if that’s all it will ever be.

The idea for banking land in the near north side of St. Louis is not new or particularly radical. During its “Model Cities” years of the 1960s and ’70s, St. Louis almost embraced the idea through a managed-decline approach outlined in a controversial 1974 memorandum, and it pursued land banking after establishing the Land Reutilization Authority (LRA) in 1973. The area where McKee has been buying up parcels, in fact, already has a large amount of vacant lots owned by the city’s public land bank.

Local elites have discussed private extension as recently as 1998, when the Danforth Foundation proposed a land trust for almost the exact same area that McKee now has in his sights. The land trust was supposed to overcome the political control of LRA-owned property and make the near north side easier for large-scale redevelopment. Regional leaders watching a revitalizing downtown seemed to have bet on an increase in value in adjacent near north land, which was devalued enough to make massive acquisition affordable.

Developers, including McKee, sat at Danforth’s table throughout these discussions. NorthSide almost seems like a distortion of the foundation’s own project, which would have placed control of land under the direction of a non-profit foundation. Instead of creating a land bank that had visible leadership and strategy, McKee ended up establishing a very hungry private machine that has no accountability to other stakeholders, let alone residents of the neighborhoods in which it operates. The rubric of development blinds people to the fact that McKee’s company essentially has bound the future of an area of the city poised for growth. Whether he develops the land or not, he will profit from assured increases in land value.

Still, city and state officials have treated the operational reality of Northside Regeneration with frightening nonchalance. They tout the developer’s increasingly convoluted promises to build $8 billion worth of new buildings and bring 20,000 new residents to the area. Yet every time McKee has promised anything that is not a fat round number — like 79 new houses discussed last fall or the rehabilitation of the historic James Clemens Jr. mansion — nothing ever happens. Even the fabled Dollar General store has never broken ground. To some observers, Northside looks like a shell game with all empty shells.

Yet the above-board activity is all that seems empty. Northside Regeneration has had little difficulty banking hundreds of parcels, with state taxpayers subsidizing half of the purchase price. The LRA sold it more than 162 acres last year, solidifying all banked land in one private entity. Northside Regeneration would be an effective land bank, too, except that technically it’s not. Officially, the company has a messianic stance, promising to transform an entire sector of the city and uplift the lives of poor residents through job creation.

This cover story has engendered plenty of debate, but it fits a pattern of political justification for large-scale, private real estate capitalism. As Robert Beauregard writes in Voices of Decline, “By hailing restlessness as a positive virtue and by focusing attention on the creative rather than the destructive aspects of urban development, or at least portraying them much differently — the former as desirable and the latter as unfortunate but necessary and inevitable — new patterns of development and disinvestment are justified”

The mythic character of Northside Regeneration, perpetuated by McKee and his allies in Mayor Francis Slay’s administration, is far more conventional than the real story — that one developer created the city’s first private land bank, and will end up brokering the future of an entire swath of north St. Louis with large amounts of public financing.

A true telling of the Northside Regeneration story would start with the city’s lack of effective land bank policy. St. Louis allows aldermen to govern LRA transactions, rather than professional staff. LRA lacks a full-time director, and instead shares staff with the city’s development agency. Occasionally LRA preemptively acquires land for projects, but usually at the request of an elected official. The city’s own land bank is a rudderless, ineffective tool that has been bent to political interests.

Yet there never was any reason why LRA, or a similar public agency, could not have accomplished what McKee has done. Public land banking on the near north side would have been far more transparent, and would have required public input. The parcels it dealt with would have been immediately available for purchase, not beholden to a long-term private profit scheme. Developers already working on successful housing jobs in the area, like McCormack Baron Salazar, have been stopped cold because of Northside Regeneration.

Of course, to take the lead on strategic land banking, public officials would have had to be ready to take the public beating that McKee has suffered. The developer has been an inadvertent battering ram for a city government unwilling to lead on issues of vacant land and strategic planning. The more discussion focuses on McKee and his fantastic project, the less it focuses on the lack of public strategy for vacant land — both on the near north side and across the city.