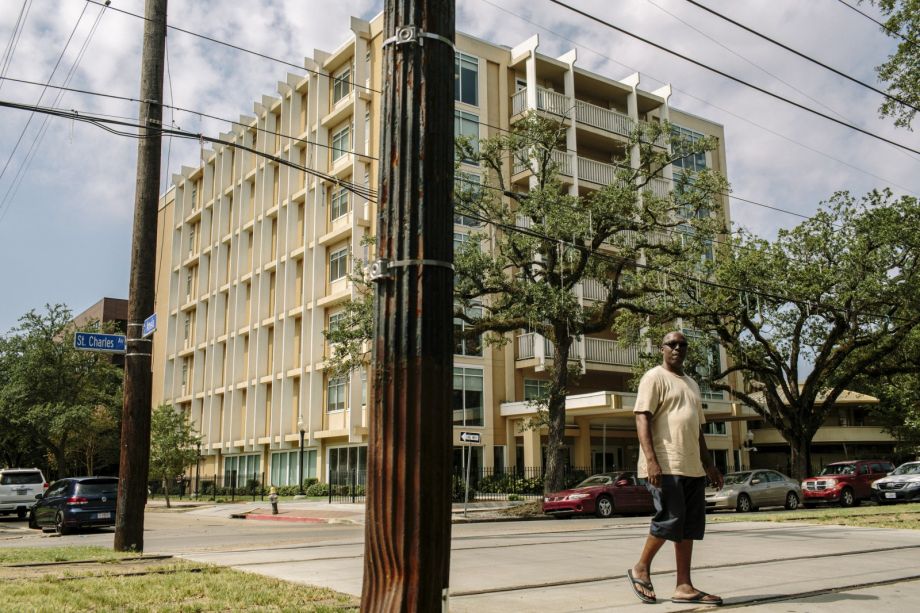 The LSU building on St. Charles Avenue that houses the New Orleans Musicians’ Clinic on the second floor (Photo by William Widmer)

August 26, 2005 was a typical lazy end of summer Friday afternoon at the New Orleans Musicians’ Clinic (NOMC). At 4 pm our office administrator locked the file cabinets containing the health records of our 837 active patients, turned out the lights, and rode the elevator down seven flights to street level. It would be the last time any of our staff would enter that office.

Since the musician’s clinic was founded on May 1, 1998, our mission has been to sustain New Orleans’ musicians in mind, body, and spirit. Our musicians are the backbone of New Orleans’ number one industry: tourism. The NOMC proudly serves a culture which was bent by slavery, poverty, disease, and flood and who responded un-broken with the USA’s only indigenous art form, Jazz. Our health care team serves members of brass bands who overcame the violent deaths of some of their members to be nominated for a Grammy, and yet in 2015 continue to live in such poverty that they must rent their horns. We treat iconic Mardi Gras Indians who still live in homes that lack a roof 10 years after the floods of Katrina.

Caring for at-risk patients excluded from the USA health care system was a factor for the NOMC even before Katrina struck on August 29, 2005. That is why by Thanksgiving 2005 the NOMC became one of the first clinics to re-open in New Orleans. To put the largest man-made disaster in USA history in perspective, during World War II German bombs destroyed 200,000 buildings in London over the course of six years. The levee breaches flooded 80% of our city, destroying 225,000 buildings in New Orleans in one morning. Once the 12-foot storm surge subsided, the city was submerged in water from 3 to 11 feet deep. In 2015, many neighborhoods are still buried in weeds.

A few hours before Katrina made landfall in 2005, I had evacuated to the home of my widowed mom outside of Natchez, Mississippi. We had no electricity for 2 days. Once power was restored, news of the magnitude of the disaster in New Orleans came flooding in. The first day our electricity was restored I had 40 emails from panicked friends, colleagues and NOMC clients. The second day I had more than 600. Everyone needed help. Back in New Orleans the flood washed away entire neighborhoods. Fats Domino was rescued from the roof of his 9th ward home where several years before I had “styled” his Christmas album. The water had destroyed medical records and scattered our staff, patients, friends and family all over the country.

I was stunned into disbelief. There was no way that the US government and the Red Cross couldn’t rectify the damage, right? Friends from all over the world were offering to send money to the NOMC, but we could no longer access our bank account. Musicians needed money to get back to Louisiana, but there was no mail service. Most importantly, I had no training in disaster relief or fundraising. All I possessed was hope that music would return to the city that created American music.

I borrowed $15,000 from my mom and boarded a standing-room only bus for the seven-hour trip to Lafayette the day after Labor Day, to open a new bank account for the NOMC at the Iberia Bank. A community medical center gave me a broom closet and a computer. I emailed our banking information to folks who wanted to assist musicians by wiring us funds. With the help of friends in Lafayette we took the money to Walmart, bought $250 gift cards and Fed Exed them to our musicians in shelters all over the country. We worked with assessors in rural Louisiana Parishes who “loaned” homes to musicians who wanted to come back to their home state. We funded gigs at $100 a man first in Lafayette and then back in New Orleans. It took a month to completely drain the water out of our city so that residents could begin the process of rebuilding their lives.

My goal in those first days, then weeks and now years is simple: to cultivate the hope that the fabric of our culture was “bent not broken.” Ten years later, the New Orleans Musicians’ Clinic has grown into a patient-centered medical home serving more than 2,500 patients in the state-of-the-art medical facility in uptown New Orleans. As part of Louisiana State University’s healthcare system, NOMC patients are treated through a network of sixteen medical specialties. Each NOMC patient has electronic health records they can access from their cell phones to get refills for their prescriptions and communicate with their providers. We have expanded our health care team from two to seven. In addition to paid staff, numerous volunteers keep us running day in and day out.

Donors from the entire world support our mission to offer better health outcomes to New Orleans’ cultural icons in the face of daunting health disparities. More than 80 percent of our 2500+ patients fall into the “sacrifice zone”, earning too much for Louisiana’s meager Medicaid and too little to qualify for Obama care.

Together we survived Katrina and the subsequent “hurricanes” BP and the policies of Governor Bobby Jindal. But until we can overcome health disparities, we will still be dancing in the streets at funerals.