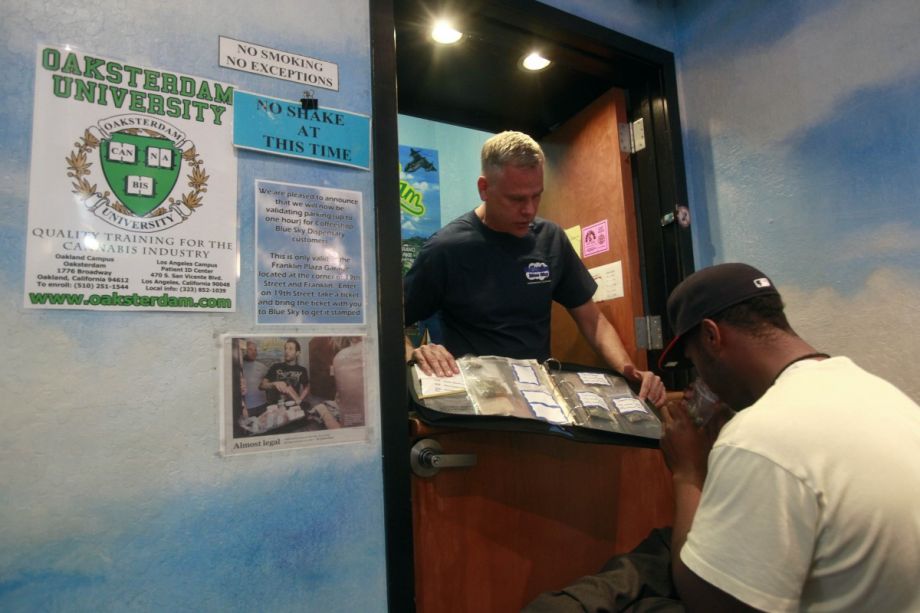 A patient chooses between wares at Coffeeshop Blue Sky dispensary, a former Oakland dispensary shut down by a federal raid in 2012. (AP Photo/Jeff Chiu)

Bucking the national trend, Oakland won’t bar those with criminal drug records from entering the legal cannabis trade — and instead it will give some priority permitting. The city council voted last week to set aside half of new marijuana business permits for Oakland residents who have been arrested for marijuana crimes in the last 10 years, or have been living in six East Oakland police beats with high marijuana arrests for the last two years, reports the Mercury News.

The “Equity Permit Program” is intended as reparation for those disproportionately targeted in the war on drugs, particularly black and Latino residents. While minorities are over-represented in the criminal justice system for drug crimes, they’re under-represented among legal cannabis business owners. Of the eight dispensaries currently located in Oakland, only one is black-owned. The city plans to issue eight new permits a year, and begin to introduce permits for marijuana businesses other than dispensaries, including cultivation, production, manufacturing and transportation.

The council unanimously passed the equity permitting laws, introduced by Councilwoman Desley Brooks, despite the objections of the city’s own Cannabis Regulatory Commission, the majority of which opposed them. Jake Sassaman, a member of that commission, told the Mercury News the new law was “an impossible minefield” to navigate. “This is not equity. This is a travesty,” he said.

Critics said it would slow down the permitting process, potentially force existing cannabis entrepreneurs owners out of town, and cost the city revenue expected to be generated by an increase in dispensaries and the anticipated legalization of recreational marijuana in California.

Others supported the intention of Brooks’ amendment but said it was too narrow, and should be expanded to other police beats, including some in West Oakland. Most of the six currently included in the legislation fall within Brooks’ council district. Councilman Dan Kalb said he intends to offer amendments over the next few months that would expand eligible areas and potentially extend priority permitting to the children or spouses of those incarcerated for marijuana crimes.