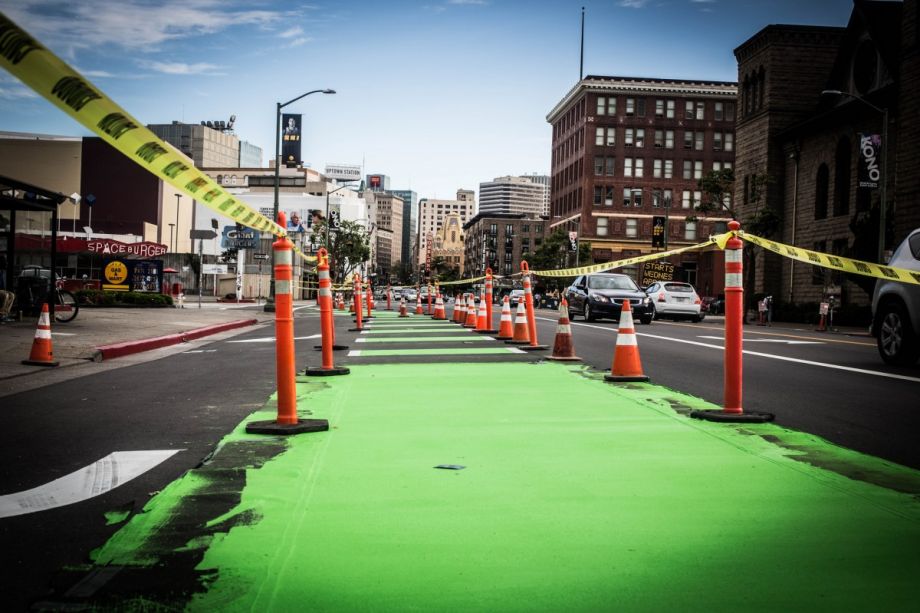 As is often the case for streets advocates, it wasn’t walking in and of itself that drew Nicole Ferrara to her role as executive director of Walk San Francisco. It was the idea that walking and biking intersected with so many seemingly disparate issues she cared about in her personal and professional life.

“My background is in public health and urban planning. I wanted to understand how to make communities healthier so we’re preventing these enormously devastating chronic diseases and the inequitable outcomes they have. I really got excited and inspired by the walking and biking movement and how it is so linked to climate change, health, community building and how our streets are where we all come together and can make change happen,” Ferrara says.

Given the role she played in creating San Francisco’s Vision Zero policy, it seems likely a similar program is on the horizon for Oakland.

“Possibly more than anyone here in San Francisco, Nicole led the charge for Vision Zero and has taken a really data based approach to how we design our streets,” says Brian Wiedenmeier, San Francisco Bicycle Coalition executive director. “I have a tremendous amount of respect and admiration for Nicole. She is a fierce advocate for safe streets.”

“When I came to Walk SF, I wanted to do something to advance health equity goals. The obvious answer was Vision Zero. We know that low-income communities, communities of color, seniors and people with disabilities are often at a much greater risk of suffering from a traffic crash, and these are people that often rely on walking to get around,” explains Ferrara.

Walk SF’s approach to Vision Zero organizing is perhaps illustrative of how Ferrara will do things in Oakland. She says they built a coalition of other organizations, advocates and community leaders before approaching the city about adopting the policy.

“There’s so much shared ownership over San Francisco’s Vision Zero movement both across city departments and across the community,” Ferrara says. “When I started, we had two people at Walk SF. There was no way we could do Vision Zero on our own. But it’s been a lot of partnership building and hearing from communities that really want and need the improvements to guide that direction.”

Oakland advocates such as Chris Hwang, Board President of Walk Oakland Bike Oakland, are hoping to see that sort of engaged approach from Ferrara.

“We want people to feel empowered and engaged in their communities,” Hwang explains. “It will be critical to their success that the Oakland DOT can deliver on that and get the public engaged in their planning processes.”

Hwang is feeling optimistic, based in part on the DOT’s strategic plan. “I really think they have taken some solid foundational steps in their work,” she says. “Equity is elevated to the overarching principal and value. It’s important for us to say it out loud and imagine our work through those lenses.”

That said, Hwang and her colleagues in the advocacy world also feel like the DOT and the strategic plan are long overdue. “All of us are pretty impatient by now,” she says. “Having advocated for many years and for some people many decades, this foundational step seems like it’s taken a long time.”

Ferrara says her role will be to develop policies and projects that prioritize safety of people walking, and bring those to the mayor and City Council. She recognizes that in doing so, “it’ll be really important to engage communities that are historically underrepresented. … Under the framework of the strategic plant here’s a lot of goals around building authentic community engagement.”

I asked Hwang what she wants to see from Ferrara in her new role. Unsurprisingly, she says she wants Oakland to commit to Vision Zero.

“I think it’s important for Oakland to be very affirmative about our commitment to Vision Zero,” she explains. “That’s not to say that VZ is the end all be all, but I think it’s absolutely necessary.”

As she looks ahead to April, Ferrara is excited to make the jump from the nonprofit sector to the public sector.

“I’m excited to shift from advocacy to city government and see the impact that we’re able to achieve,” she says. “Advocacy has given me a lot of freedom. I welcome the opportunity to actually implement strategies that follow the lead of a mayor and city council with these shared values I support.”