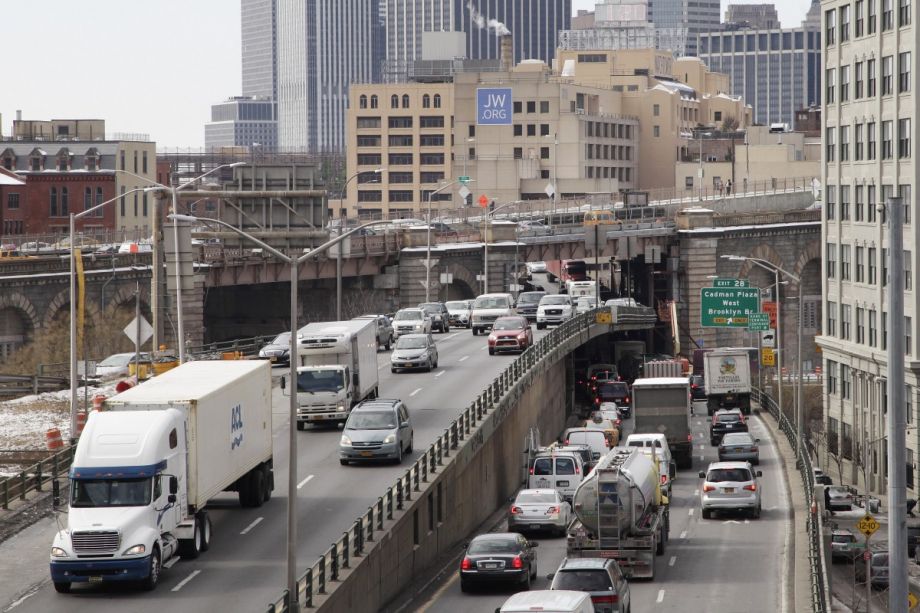 Using design-build on a $1.7 billion rehab of a portion of the Brooklyn-Queens Expressway could save time and money. (AP Photo/Mark Lennihan)

The replacement of the Kosciuszko Bridge, which connects Brooklyn and Queens, is a rare public project in New York: It is slated to open on time and on budget this spring, thanks to an integrated design-build approach that bundles together the design and construction phases of a project instead of requiring separate contracts, bidding and procurement for both.

Now, The New York Times reports, New York State Governor Andrew Cuomo, New York City Mayor Bill de Blasio and others want the state legislature to expand the use of design-build. The unintegrated approach — design-bid-build — often results in a longer wait time after design has been completed but before construction has begun, increasing the cost of projects.

The benefits could be sizable. Polly Trottenberg, the city’s transportation commissioner, says that a design-build approach could save her department as much as $330 million on about six of the agency’s biggest and most expensive projects, including a $1.7 billion rehab of a portion of the Brooklyn-Queens Expressway.

“We want to spend taxpayer dollars fixing bridges and roadways and not on change orders and procurement lawyers,” she says. And the city faces an ever-growing number of bridges, roadways and other capital projects in need of investment.

But some legislators, labor leaders, construction industry representatives and others are concerned that expanding design-build could lead to a loss of public sector jobs as agencies contract out for design and engineering work instead of doing it in house, which could result in a more subjective selection process. “We will look at any proposal and review it, but we don’t support blanket design-build,” Michael Whyland, an Assembly spokesman, told the Times. “Why? Because we want to make sure workers are protected and that taxpayer money is being spent responsibly.”

Separating the design and construction phases of a project is a relatively recent method, dating back to the Industrial Revolution. The reemergence of design-build responds to concerns that the construction industry has become too segmented and non-cooperative as a result.

Twenty-five states authorize the use of the design-build process by all agencies for all projects, and another 17 states allow it to be widely used, according to the Design-Build Institute of America. New York is one of just eight states that limits the use of design-build — in New York’s case, to five agencies: the Transportation Department, the Environmental Conservation Department, the Office of Parks, Recreation and Historic Preservation, the New York State Thruway Authority and the New York State Bridge Authority.

Those authorizations are up for renewal next year, and so design-build is likely to become an increasing source of debate. “It’s the only way that government can deliver major projects on time and on budget,” says Kathryn Wylde, president and chief executive of the Partnership for New York City, a group that represents many of the city’s top business leaders. “The traditional way has proven to create massive delays and overruns that have not been in the interest of anyone. This is a step toward efficiency.”