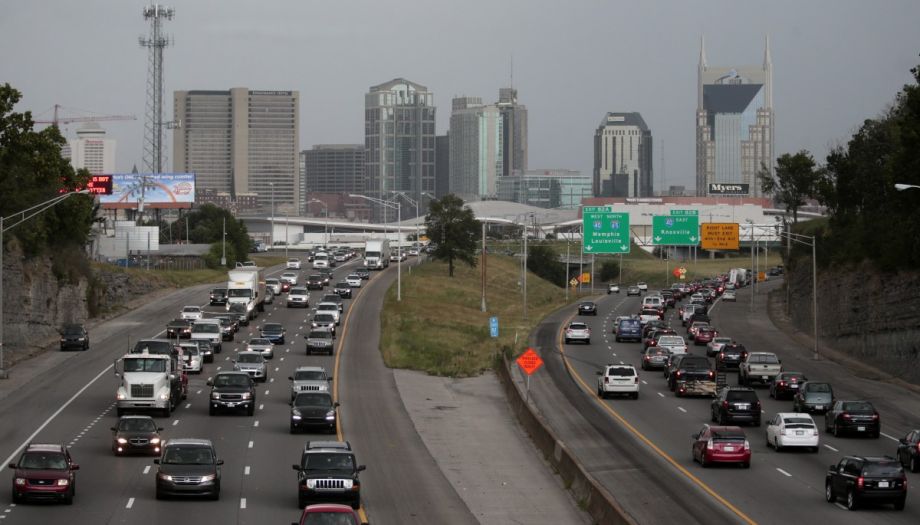 Heavy traffic moves away from and toward the downtown area of Nashville. (AP Photo/Mark Humphrey)

Nashville’s population is booming. Between new residents moving in and babies being born, the metro area gained about 100 people a day last year — putting Nashville in the top 20 fastest-growing U.S. cities. As is always the case in car-centric cities, that growth is putting a serious strain on Nashville’s formerly free-flowing streets.

“We’re a somewhat typical Southern city with about 85 percent of folks commuting via single-occupancy vehicle,” says Erin Hafkenschiel, director of transportation and sustainability in the mayor’s office. “Five years ago, people would say Nashville was a 20-minute town. Everything was within a 20-minute drive. That’s no longer the case.”

The region has a plan to accommodate the growth. A bunch of them in fact. In 2015, the city released Nashville Next, a 25-year comprehensive growth plan. Last fall, the Regional Transit Authority board approved nMotion, a $6 billion plan centered on light rail. In January, the city released a draft of its vision for improving walking and biking, called WalknBike. All are long-range plans.

In an effort to make good on campaign promises to improve transportation, Mayor Megan Barry released an action agenda in late May outlining projects she wants to accomplish in her first term in office. Moving the Music City includes plans for improving bus frequency, building bike infrastructure, sidewalks and crosswalks, and implementing Vision Zero strategies.

There is plenty of room for improvement. According to the U.S. Census, just 1 percent of people in the metro region use transit as their primary mode of transportation. Nora Kern, executive director of Walk Bike Nashville, says much of the city’s bike network is made up of painted bike lanes on 40 mph arterials and that just 19 percent of the city’s streets have sidewalks. Smart Growth America ranks Nashville 37th among the 104 most dangerous U.S. cities for walking.

“We need to start making progress on all of these fronts to really move the needle on transportation,” says Hafkenschiel.

For transit, the plan calls for increasing frequency of bus service to every 15 minutes or faster and extending service hours on the 14 most popular bus routes in the city. It also calls for building bus lanes and implementing bus signal prioritization at some intersections as well as upgrading the fleet from diesel to hybrid electric. Improving bus service has a dual purpose: giving people a viable option for getting around without a car and setting Nashville’s light-rail system up for success.

“If our light rail opened tomorrow it would not be a success because our transit ridership is so low. We wouldn’t see the ridership we want on an investment that big. Over the next five to 10 years moving towards light rail, we have to see improvement on bus ridership,” says Hafkenschiel.

Moving the Music City also recognizes that if people can’t easily and safely access the bus, they won’t ride it. Some of the highest ridership routes run on streets without sidewalks or crosswalks.

“Being able to cross the street has proven to be very difficult,” says Kern. “The routes either don’t have sidewalks along them or have very narrow sidewalks. It’s a half-mile to a mile between crosswalks. The vast majority of our pedestrian fatalities have happened on the same five or six corridors.”

The plan prioritizes building sidewalks and crosswalks on high-ridership transit routes. It also calls for building sidewalks in the highest-priority neighborhoods, as identified in the WalknBike plan. Some of them will be traditional concrete sidewalks. Some, for the sake of time and money might be “quick build” projects that use paint and barriers to create dedicated space for walking.

“A lot of streets are really wide so there’s potential for experimentation. There’s a lot of space to reallocate and use more wisely,” Kern explains.

“We’re very excited that there’s a focus on a network of protected bike lanes. We have a lot of bikeways that are just a stripe of white paint on 40 mph roads. Starting downtown and building out is a really good strategy that was laid out in WalknBike,” says Kern.

That said, Kern wishes Barry had put more bike funding in her budget. It doubles funding for bike infrastructure implementation from $1 million to $2 million, but that’s well short of the $8 million WalknBike calls for.

Of course, funding is always a challenge. Barry has plans to run a ballot referendum in May 2018 that, if passed, would raise taxes to create a dedicated funding stream for transit. But the projects in her three-year plan don’t need that extra funding, according to Hafkenschiel.

“It was important to us that we could get these projects done in three years,” she explains. “We think this action agenda is only setting the stage for what needs to happen in Nashville around transit and transportation services. It is an important step and we need the referendum to keep going.”

Kern is encouraged by the mayor’s transportation priorities and what they could do for Nashville. “It’s promising that Barry is putting her political capital towards walking and biking and transit. People are excited about light rail and it’s really sexy, but its success will depend on getting people to and from it on buses, bikes and walking.”

UPDATE: The percentage of streets without sidewalks in Nashville has been corrected.