Micro-Apartments Could Be Key to Affordable, Healthy Downtown Nashville – Next City

Micro-Apartments Could Be Key to Affordable, Healthy Downtown Nashville 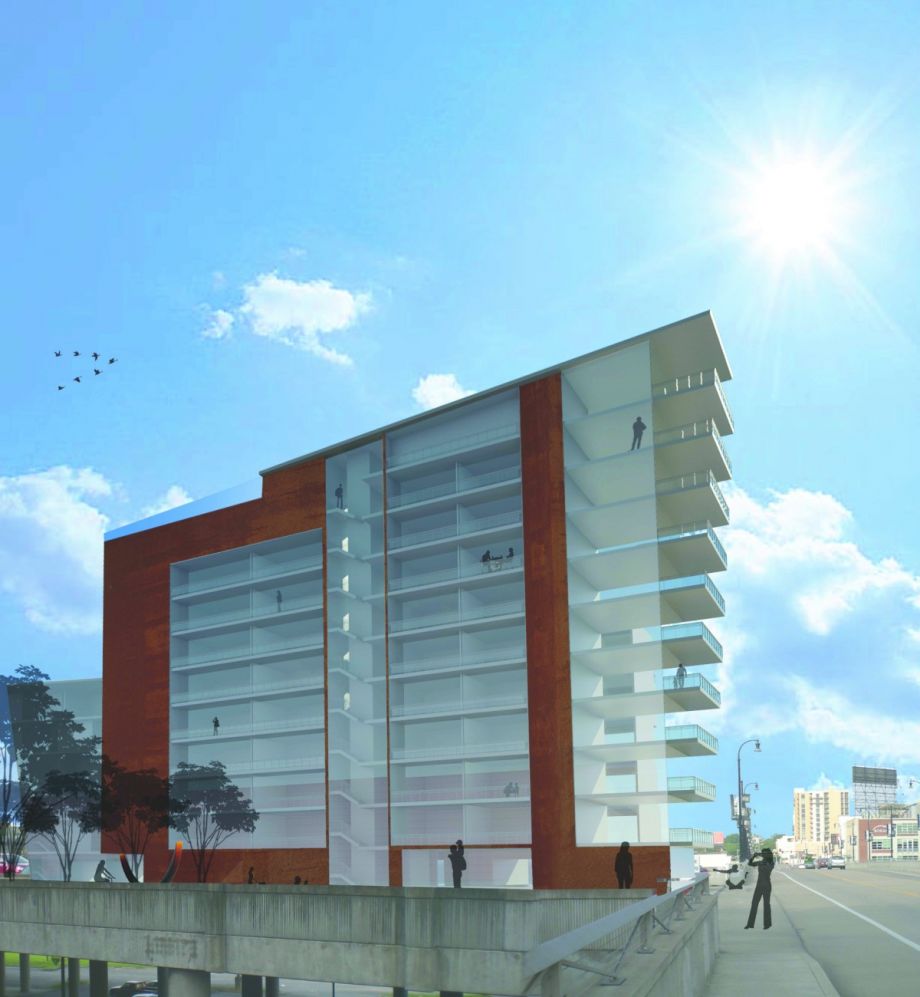 Rendering of a micro-housing design concept in Nashville (Credit: Gerry Hogsed and Jamie Schlenker, University of Tennessee College of Architecture and Design)

For a growing sector of Nashville’s population, downtown is a very desirable place to live — if one can afford it. The city core and its surrounding neighborhoods are booming with cultural, arts and entertainment venues; locally owned restaurants; nightlife; and professional sports. And Nashville’s urban neighborhoods each have their own unique character.

Residential density is key to promoting downtown areas as around-the-clock environments, where walking to work and even not owning a car are possible. Young professionals often seek to live in a downtown, but find conventionally sized condominiums or apartments not affordable due to core land costs. Micro-unit housing addresses that equation. Walkable urbanism is an inherently healthy lifestyle choice.

By 2035, the Nashville Metropolitan Statistical Area, now populated by approximately 1.6 million people, is projected to grow by another 1 million. As the large cohort of aging “baby boomers” retire, and as “Generation Y” enters the workforce, the demographics of the city will shift dramatically. In addition, individuals are marrying later in life than previously and having children later as well. These changes have major implications for housing in Nashville in terms of overall quantity, diversity of type, relative affordability, and proximity to enhanced public transit.

Micro-unit housing (150–400 square feet) is a recent trend that significantly addresses such growth and demographic implications by providing small, adaptable, and affordable units. The small living arrangements of micro-unit housing are enhanced by shared amenities that create a sense of community within the building. If the units are built in convenient proximity to transit and everyday services and activities, micro-unit housing residents can utilize public transportation or walk, rather than relying on the automobile — potentially saving $8,946 a year (on average in 2013 according to AAA) in ownership and operating costs, while enhancing their daily physical activity. Micro-units themselves promote low-impact living because of their lean size and density.

Half of American households now have no children in the dwelling, and demographers expect this trend to continue. Because micro-units may not have enough space for a bed, dining table, and sofa, they must be designed to be adaptable during the course of the day, as apartment needs change. Furnishings such as Murphy beds, fold-out sofa beds, tuck-away tables and compact kitchenettes maximize the use of small dwelling spaces. Clever architecture can make a small space seem more spacious. Maximizing the window wall is very important in extending the space visually. Shared elements — such as fitness centers, roof gardens and terraces, dog grooming facilities, screening rooms, conference rooms, bicycle parking, and bulk storage — all complement the resident’s actual unit and encourage a sense of community within the building.

Both the baby boomers and Generation Y constitute key potential market sectors for future micro-unit housing in Nashville’s downtown. A significant portion of Generation Y seems to find suburban environments isolating, car-dependent and lacking in the entertainment venues and leaner lifestyle that they seek in downtowns. Although micro-housing options exist in such cities as New York, Boston, Denver, Seattle, San Francisco and Vancouver, as of 2013 no micro-unit apartment buildings existed in downtown Nashville.

In the summer of 2013, the University of Tennessee’s Nashville Urban Design Program explored the potential of micro-unit housing as it may emerge in the city. In a design studio based at the Nashville Civic Design Center, ten students focused on five diverse sites throughout the central city. The Nashville Downtown Partnership sponsored the studio and the Greater Nashville Association of Realtors also provided input.

We have built suburban freestanding houses on lots to the point where that demand is met. What is not being met is the market for walkable urbanism in many of our downtowns. It’s about providing choices in where and how we might choose to live.

Micro-unit housing could enhance downtown’s neighborhoods by being a prime component of walkable, mixed-use development that, in addition to residential, includes retail, offices, entertainment venues and services. Those desiring downtown living who currently find available options too costly would benefit from micro-units provision of diverse and relatively affordable housing in desirable infill locations. The concept of micro-units could also benefit the central city by generating urban growth and economic development, increasing density and enhancing energy on our downtown sidewalks.

As Tamara Dickson, vice president of economic development for the Nashville Downtown Partnership, explains, “With strong demand for various types of downtown housing, affordability is the key to expanding options. Micro-housing offers an appealing alternative to the types of housing currently available downtown.”

Micro-unit housing is certainly not for everyone. No one is suggesting such units are an urban silver bullet. Seniors may find the daily conversion of bed to couch cumbersome. It does imply a household with limited accumulated possessions. Micro-units probably provide inadequate space for raising children. A real estate market benefits, however, when it provides choices to meet the needs of various constituencies, including market sectors that may be unrepresented at the moment in downtown. While micro-units may serve a “niche” market, that market promises to be an expanding one. The bottom line is that micro-units, to the extent they encourage another form of walkable urbanism, are intrinsically healthy for adults. Already robustly encouraged in other North American cities, micro-unit housing should be a part of the future development portfolio for downtown Nashville.

T. K. Davis is an associate professor in the University of Tennessee College of Architecture and Design.