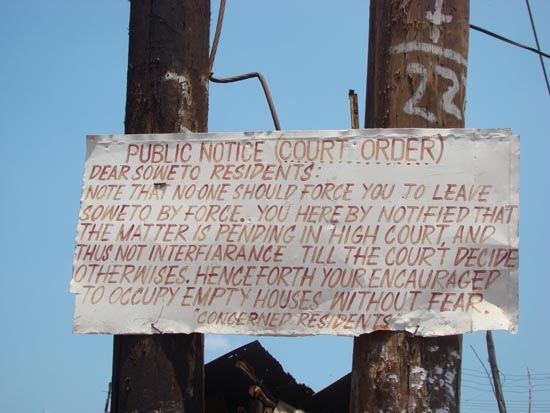 10,000 new residents arrive in Kibera every year. At such a dizzying rate, it is no wonder that the slum, in southern Nairobi, Kenya, is the largest in Africa. The community was first settled when the British colonial government gave Nubians from South Sudan residence permits in exchange for their service in the African Rifle Corps during World War II. “Kibera” means “forest” in Nubian, which is how the veterans found the land upon arrival, but certainly not what it looks like today. In the intervening 65 years, a combination of lackluster planning, population explosion, rural-to-urban migration, and political corruption post-uhuru (Kenyan independence) resulted in contemporary Kibera, which packs a staggering 800,000 to 1 million people into just under 2.5 square miles crammed with single-story homes often made of scrap and sticks. 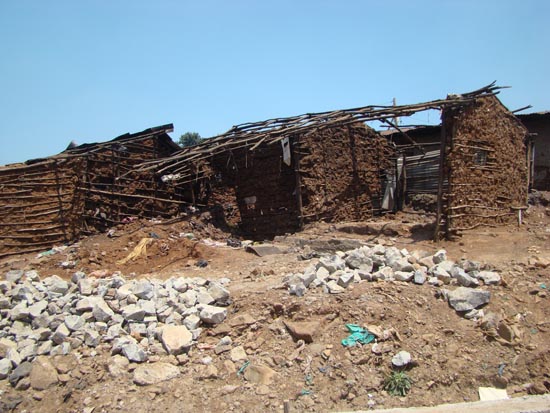 Kibera’s challenges are typical of those in other urban squatter communities across Africa. Extremely tight living conditions (an average of 3 square meters per family), inadequate access to water and sanitation facilities, insecurity of tenure and vulnerability to natural disaster are the norm for upwards of one-fifth of Nairobi’s population, which nevertheless sees the job opportunities in the capital as a better opportunity than dwindling agricultural prospects in the countryside.

Nairobi is somewhat unique among African cities, however. For one, the formal city is fairly modern. For another, Kenya is the most prosperous country in East Africa, and it is subsequently home to a massive NGO presence, including the UN Mission to Africa, the World Food Programme, various European high commissions, and embassies galore. In addition, the Kenyan political system, while corrupt – especially when it comes to land issues – is historically stable. That said, disputed elections in 2007 did lead to wide-scale, unprecedented ethnic violence. In Kibera, a microcosm of Kenya’s tribal groups living cheek by jowl, the results pitted neighbor against neighbor with tragic results. In a gruesome indicator of the scale of the violence, stores were compelled to limit customers to one machete per purchase.

Social and political life has largely calmed as Kenya prepares a new constitution that seeks to avoid the circumstances that led to 2007’s bloodshed. Meanwhile, the deprivations of Kibera persist. Since 2004, however, a committed group of residents in Soweto Village East, one of Kibera’s 12 villages, has been agitating for a radical plan: They want to see the single-story shanties demolished and replaced by 600 units in high-rise apartment buildings. They may get their wish, as such a plan is the pilot project for KENSUP, the Kenyan Slum Upgrading Programme. 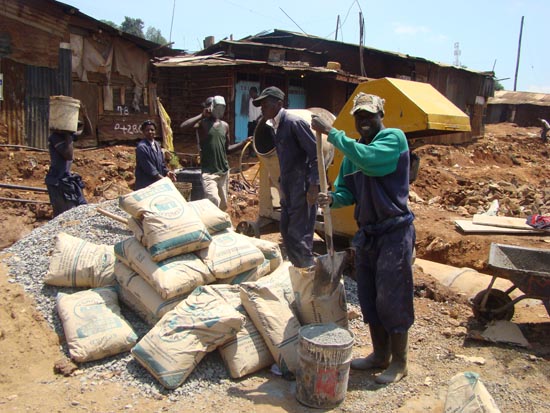 KENSUP is situated in the Ministry of Housing and jointly funded by the Government of Kenya and UN-HABITAT/World Bank Cities Alliance. It was a logical partnership, as UN-HABITAT, the UN agency for urban issues, is based in Nairobi and the UN Millennium Development Goals emphatically call for the elimination of slum conditions. KENSUP has targeted Kibera, and Soweto East specifically, as its proving ground. They opened a field office at one of the main entrances to Kibera, where a busy road choked by matatus (collective vans) serves as the community’s lifeline to the CBD and the rest of the city. The two-story KENSUP building is modest by government standards, but a luxurious workspace by Kibera standards, proudly flying the Kenyan flag in front.

Francis Omondi Ombuoghr and Patrick Munyao Mbuvi are lifelong residents of Kibera who are a crucial bridge between KENSUP and the community. They work out of the KENSUP office and serve as members of the Settlement Executive Committee (SEC). The first step, they explained, was to conduct a physical and socio-economic mapping exercise. This effort yielded ID cards for residents of Soweto East, assuring them housing in a “decanting” site several miles away, as well as a unit in the new buildings, which can be built only after the evacuation and demolition of the existing structures. The resulting units will be purchased through a cooperative title in which residents pool their resources.

While simple on paper, the process is excruciatingly complicated and difficult in practice. The SEC comprises 17 members representing different stakeholders in the Soweto East plan, including faith- and community-based organizations, NGOs, renters, the disabled, widows and orphans, youth, and structure owners. The latter are not going along so easily, as they stand to lose their tax-free rental income as residents move to the decanting site and are not being compensated for the loss of their structures. Ombuoghr asserts, “If you open the window of compensation for structure owners – how much? You will not have a penny even to build a bridge.” In response, Marja Hoek-Smit, professor of real estate at the Wharton School of the University of Pennsylvania and a highly sought-after consultant on mortgage markets and housing reforms worldwide, calls the lack of landlord compensation a “non-starter.” 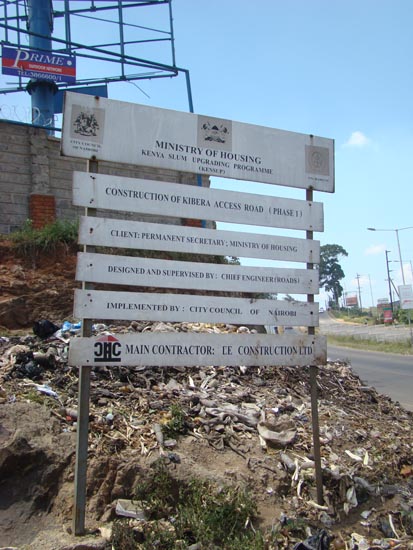 Once tenants are gone, moreover, the structures are frequently reinhabited by fresh squatters, or simply left vacant and not fully demolished. Evidence of these phenomena was well evident on a walk through the community. As the paved road – a new improvement – that leads into Soweto East winds its way from the relatively formal storefronts closer to the main road into the heart of the community, partially abandoned shacks abounded and Ombuoghr and Mbuvi pointed out ones that had new families living in them. Though landlords who occupy their residences are assured units in the new buildings, many are absentee and have filed lawsuits to prevent the plan from being executed. Nevertheless, Ombuoghr is quick to point out that “Every other person is happy with the situation [in the new plan]. Good living, good sanitation, decent shelter, water.”

Those promised basic rights may prove elusive, however, as upgrading slums is very low on the Kenyan national agenda. Michael Larice, professor of urban design at the University of Pennsylvania School of Design, wryly comments, “Upgrading is only a national priority when there is a national disaster.” Consequently, KENSUP has a staff of only about five when it could really use fifty, and its employees are frequently dumped from other agencies with the hope of getting out as quickly as they can. Given such conditions, Larice is pessimistic about the prospects of this pilot plan, calling it too high-end and top-down, as well as simply unable to meaningfully keep up with the demographic pressures of Kibera. 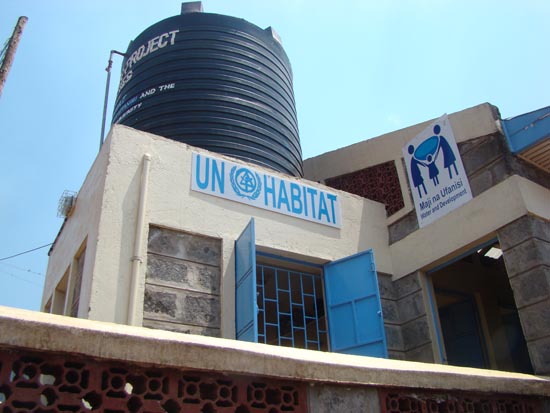 Instead, Larice points to Mathare Valley 4A, a slum on the northern end of Nairobi, which partnered with non-profits to successfully implement in situ, sweat-equity upgrading. The Catholic Archdiocese of Nairobi put up the funds to purchase properties run by slum lords (the compensation issue missing in Soweto East), made infrastructure investments like paving and street lighting, and established a non-profit to provide the properties at much more equitable rents. In turn, residents were asked to contribute by making structural improvements to their homes at a scale they could afford. This is his preferred model, where the improvements match the domestic economy of residents. The end product may be less glamorous than a new high-rise, many of which are shoddily constructed anyway, but most importantly there is an end product at a scale that makes sense in the context of squatter communities. In the KENSUP plan, Hoek-Smit says, “It can work, but I have my doubts.” She points to the possibility of a black market as residents sell their IDs and with them rights to new units. She is also skeptical of the ability to turn low-income renters into good homeowners. Ombuoghr counters that the cooperative framework will prevent black market outliers from participating in the new housing and many Kibera residents do keep homes and storefronts tidy as best they can.

Nevertheless, Larice is concerned about the lack of a wider plan. UN-HABITAT has installed toilet and shower facilities, for example, and their enormous water tanks are now a familiar site across the rooftops of Soweto East, though not yet the entirety of Kibera. They are a helpful gesture from the donor community, but indicative of a lack of government interest in improving the quality of life for Kibera’s residents. “Toilet facilities could be done as a government public good giveaway,” Larice explains. They could form the basis of needed infrastructure, coupled with a system to encourage self-help upgrading. Neighboring Tanzania, for example, has benefited from the legacy of ujamaa (the Swahili word for extended family), a series of social and economic policies the country pursued post-independence when it turned socialist and sought African, rather than Western, solutions to its problems. In Ghana, an innovative approach mandates that squatters build a concrete foundation platform within a certain amount of time or lose the right to their land. That step, which encourages permanence, is sufficient to then let construction and renovation proceed at a pace convenient to the resident. Finally, Dandora, on the outskirts of Nairobi itself, “developed a collective form of participation, with the purpose of organizing the financial labour and managerial resources of plot-holders (known as ‘building groups’).”

These different approaches all have their drawbacks – ujamaa’s forced collectivization uprooted many Tanzanians, the Ghanaian approach means theoretically some plots could languish with nothing but foundations, and Dandora is no utopia, with building groups not always looking out for the best interests of their members. But they do present options other than the tired model of high-rises, which simply don’t reflect reality in a place like Kibera and a context like Kenya. While the Settlement Executive Committee of Soweto Village East is committed, serious, and dedicated, in the absence of real governmental support, their efforts may sadly be in vain.