My Martian City – Next City 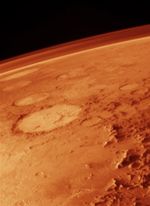 Sunday, May 25th, marked successful touch-down of the Phoenix Mars Lander, a mission headed up by the University of Arizona here in Tucson. The excitement has been far more palpable than the Martian atmosphere itself, which at just 0.7% of Earth’s atmosphere is quite thin. Atmospheric differences aside, all this Mars hullabaloo has got me thinking about what the first Earth-built city on Mars would look like. Who would get the opportunity to plan that city, and would we find the amenities that make Earth’s best urban spaces also make for the best cities on the Red Planet?

Human colonization of Mars has been a subject of science and science fiction, of course, for decades. The Phoenix’s landing spot — the northern polar region of the planet — was chosen for its likelihood of having frozen water within reach of the lander’s robotic arm, and water would be the essential ingredient for human survival, even if the air itself is not breathable. Other factors in favor of colonization include similar day lengths to that of Earth, the presence of seasons, and equivalent solar energy at the planets’ surface.

Though the challenges are not minor — surface gravity is just one-third that of Earth, surface temperatures average -63 degrees C for a high and -140 degrees C for a low, water is not available in a liquid form, radiation is considerably higher than on Earth, and the atmosphere consists primarily of carbon dioxide — good urban design may be able to offset those. Don’t underestimate the power of a well-placed public plaza, even on Mars.

Given Mars’s weak atmosphere, however, we know that buildings on Mars would need to be constructed with pressure vessels similar to spacecraft, and humans would require pressure suites if out and about on the planet’s surface. So the plazas may more likely resemble the ficus-lined food courts of your average indoor suburban shopping mall.

I jest, but Mars colonization is serious business, requiring us to look closer to home for real indications of the Martian built environment. The Haughton-Mars Project, for example, takes place on high arctic isle of Devon in the Canadian territory of Nunavut. According to principle investigator Pascal Lee, the project “supports an exploration program aimed at developing new technologies, strategies, humans factors experience, and field-based operational know-how key to planning the future exploration of the moon, Mars, and other planets by robots and humans.”

More in my neck of the proverbial woods is a project that seeks to study and change urban development patterns in general: Arcosanti. Arcosanti calls itself an urban laboratory in the central Arizona desert. Originally envisioned by Italian-American architect Paolo Soleri and his Cosanti Project, Arcosanti began in the 1970s and continues to build on the principles of “arcology,” a model of creating new, high-density hyperstructures that, according to Soleri, “take the place of the natural landscape inasmuch as it would constitute [a] new topography….” The man-made topography would differ from the natural environment, he says in his 1969 book Arcology: The City in the Image of Man:

Arcosanti itself doesn’t yet meet these criteria (though it was covered in detail at the recent 2008 Ecocity World Summit), but perhaps the ideal Martian city would.

Yet the urbanist in me tends to reject what I can only envision as a sterile, emotionless place. Perhaps that’s the result of too many sci-fi movies. More likely it’s a reaction to the lifeless architecture mega-projects of Swiss designer Le Corbusier that seem close to arcologies, at least in the context of hyperstructure.

Regardless, I’d like my Martian city to more resemble the walkable cities that have a sense of history and subsequently a sense of place, cities with distinct downtowns and architecture, cities with a rich mix of residences and shops and restaurants. Cities, perhaps, not unlike Mars, Pennsylvania, a small borough with a town square adorned with a small flying saucer, located near Pittsburgh along Breakneck Creek.

Maybe I’m not so eager to envision the first Earth city on Mars, after all. Seems to me there are indeed plenty of great examples on our home planet. Yet we’ve still got a lot to learn about city building — not to mention urban collaboration and restoration — before we begin colonizing Mars or any other of our unsuspecting neighboring planets.