For Minneapolis, climate change will most likely lead to wetter, hotter years by mid-century, with annual temperatures rising as much as 5 degrees. Unfortunately, like most cities, its pipes, sewers and even electricity were laid for very different weather. Adapting could require the ability to disconnect from that grid — which is exactly what the planners of one futuristic neighborhood propose to do.

Those involved in the project, called Prospect North, use a variety of terms to capture their vision — “city within a city,” “innovation district,” “living laboratory.” Between waste-powered energy and an on-site hydroponic farm, blueprints for the dense living-and-working space look about as off-the-traditional-grid as a commune in the woods.

But Prospect North will be right in the middle of Minneapolis.

Situated between Highway 280 and the TCF Bank Stadium northeast of the University of Minnesota’s Minneapolis campus, the area is currently a mix of old grain silos, student housing and railroad tracks. But it abuts the new Green Line light rail, connecting downtown Minneapolis to St. Paul.

“We saw that development was going to happen here,” says Richard Gilyard, an architect who lives in the nearby neighborhood of Prospect Park and one of the forces behind the plan. That “we” started out as a zealous neighborhood group, but it’s evolved over time into a partnership that includes the City of Minneapolis, Hennepin County, the Public Housing Authority, the Mississippi Watershed Management Organization and the University of Minnesota, among others.

Their shared vision is for a dense, mixed-income research district adjacent to the university — a textile center, a science park with labs, libraries, 3-D printing hubs and incubator spaces and housing all within a light-rail ride of the Twin Cities’ dual downtowns. And thanks to plans for a closed-loop district grid, the neighborhood could become “a demonstration putting into practice the science and technology of the university,” Gilyard says. 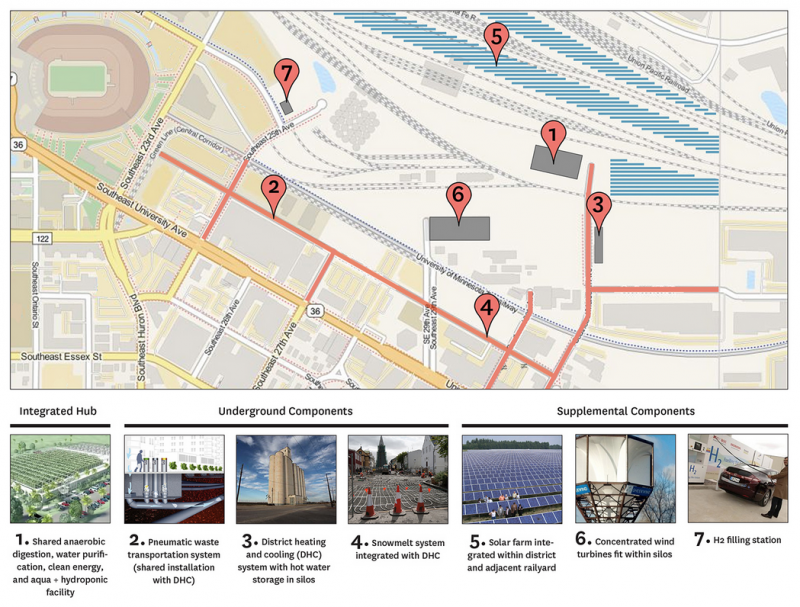 If completed as developers currently propose, the neighborhood’s infrastructure would be possible through something called an integrated utility system, designed by the Ecala Group.

A closed-loop district grid, the IUS would revolve around an eight-acre hub where anaerobic digestion transformed waste into biogas. Converted into electricity and hydrogen, these vapors would power the neighborhood while excess emissions fed a massive greenhouse full of vegetables. An aquaponic fish farm would also be onsite, along with a water treatment plant for waste and gray water, potentially augmented by stormwater.

Small wind turbines that fit in existing silos would provide excess power, along with a solar farm. Other silos would be used to store hot water for a district heating-and-cooling system.

Essentially, the IUS uses itself to create a comfortable microclimate, which is especially important for Minneapolis. While some regions are expected to become susceptible to one type of drastic catastrophe — droughts, hurricanes, sea-level rise — Southern Minnesota seems to be looking at warmer, wetter versions of the seasons that already exist.

However, precipitation will also likely increase, mostly in the winter. Gilbert’s modeling graphs don’t distinguish between rain and snow, but they do show downpours increasing.

“We need to produce infrastructure that’s more resilient for dealing with greater variety in the weather,” he says. “We need to plan for more heat and really heavy rain.”

According to Ecala President Joshua Foss, resilience is exactly the goal of the IUS, which he says is meant to “future-proof cities.”

At this point, drastic seasonal shifts still require massive fossil-fuel drains. From air conditioning to heat to large, diesel-powered snowplows, making Minnesota’s polarized seasons habitable isn’t easy. Fast-forward to an even more diverse climate and — with no change — you’d have the makings of an urban feedback loop.

Foss says the IUS would clean its own water and grow its own food, two definite assets as seasonal shifts throw food production out of whack. Meanwhile, a heating system would warm the streets and sidewalks, eliminating the need for snowplows. And inside temperatures could be kept warm or cool, powered not by natural gas but by waste.

“In its essence, the IUS is [a] turnkey solution that can rapidly accelerate a city’s ability to become energy independent, zero waste, water and food secure,” Foss writes in an email. “This is at the heart of addressing future weather patterns relating to climate change.”

Ecala Group customized plans for this system to one area in Minneapolis. But Foss and the company’s CEO Björgvin Sævarsson say it can work in any climate. And it could also be important to regions like the Southwest, where one resource, water, dries up.

Using California as an example, Sævarsson talks about the less visible aspects of climate change, both social and economic.

“When you don’t have water for agriculture, you begin to see the sheer amount of economy that can leave a state,” he says. Because the IUS recycles its water like its energy, it could also address a climate of scarcity, he says.

For now, Prospect North is still in its nascent stage. But Minnesota is heating up. Hopefully the new now-underutilized neighborhood will become a pilot for cities looking to creatively unplug.