Millions Stranded By a Total Transportation System Collapse? Tokyo Has a Plan for That – Next City

Millions Stranded By a Total Transportation System Collapse? Tokyo Has a Plan for That 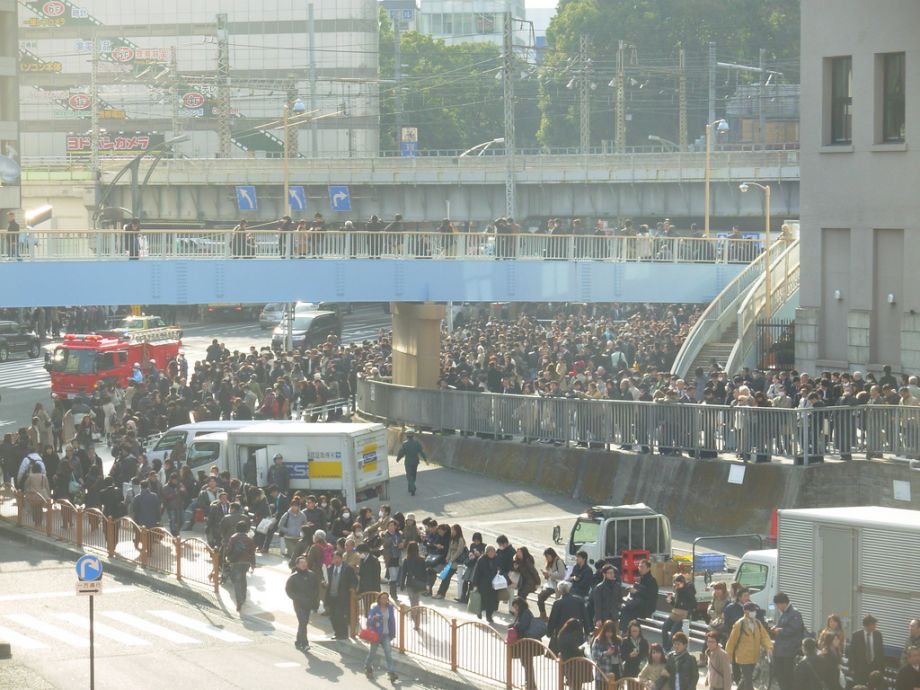 Commuters queue up outside a Tokyo subway station after the transit system was knocked offline by an earthquake on March 11, 2011. Photo credit: Elisabetta Monaco via Flickr

When Russian filmmaker Andrei Tarkovsky needed images of a future city for his science-fiction film Solaris (1972), he came, of course, to Tokyo. He shot a scene overlooking a mass of highways choked with traffic and crowded by endless rows of towering apartments to give the impression of a suffocating metropolis. “What makes us shudder is (this shot),” wrote Japanese director Akira Kurasawa in the Asahi Shimbun newspaper in 1977. “He turned flows of headlights and tail lamps of cars, multiplied and amplified, into a vintage image of the future city.”

But four decades later, this “future” Tokyo doesn’t travel by car. The more than 35 million people in the city’s metro region enjoy the world’s most extensive urban rail network — a network, which, as of last month, has 158 lines, more than 3,000 miles of operational track and over 2,200 stations.

Which makes one wonder: what if all those trains suddenly just stopped?

That’s an ominous hypothetical that hasn’t escaped the city’s leaders. According to a 2006 estimate by the Tokyo Metropolitan Government (TMG), roughly 3.92 million people would be stranded if a strong earthquake struck central Tokyo at noon on a weekday. “There is no alternative way to get home other than on foot,” wrote Professor Toshihiro Osaragi, who researches the behavior of stranded people following disasters, in a 2013 research paper. “As a result, an extremely large number of people would experience difficulties in returning to their place of residence.” Such a scenario raises all sorts of daunting questions: How would pedestrians navigate damaged infrastructure and buildings? How would fires and aftershocks endanger them further? How would emergency service vehicles make their way through a heavily congested city? Millions of people wandering the streets of post-disaster Tokyo could create a cascading set of secondary disasters.

Something akin to this scene played out three years ago, when a 9.0-magnitude quake struck northern Japan at 2:45 p.m. on March 11, 2011, a Friday. The event screeched Tokyo’s train system to a halt and sparked a mobility crisis that trapped millions in the city. By around 6 p.m., commuters were wandering the streets in a suspended exodus reminiscent of end-of-the-world disaster films.

The next year, Shintaro Ishihara, the city’s governor at the time, gave a speech in which he addressed this issue. In the speech, he detailed a new ordinance that would “require companies to maintain three days worth of emergency supplies and encourage employees to remain at their offices and schools to ensure the safety of their students, and railway stations and department stores to offer shelter to the public.”

The “Metropolitan Tokyo Ordinance on Measures for Stranded Persons” came into force in 2013. It clearly states that if a disaster knocks out Tokyo’s transportation system, commuters should avoid trying to get back to their houses and apartments. “Do not attempt to take immediate action to head home,” the ordinance warns, making exceptions for caregivers of young children, the infirm and the elderly. It also instructs employers to “prevent employees from heading home all at once.” Instead, facilities are to stockpile food, water and other supplies, including additional provisions for visitors who may also be stranded.

Of course, actually getting people to shelter in place is more easily said than done — it’s human instinct to try to reunite with loved ones in times of crisis. So part of the government’s plan is to create “emergency support stations” for those who try to get home anyway, in the form of retail spaces that are commandeered and transformed into “base camps.” Gas stations, convenience stores, fast-food restaurants, even karaoke bars will become relief centers offering food, water and medical help to those traveling great distances by foot. In metropolitan Tokyo, these “great distances” are no joke — the average Tokyo commute takes an hour and 20 minutes, so anyone trying to walk that far will need assistance along the way.

Despite these contingency plans, the government remains concerned. Professor Osaragi, along with a number of other experts, met with the TMG’s disaster prevention agency on June 13. Osaragi has done extensive modeling on how and why people will return home after a disaster and the spatiotemporal distribution of those who might be exposed to fires on their post-disaster walk. He is also modeling areas of extreme pedestrian congestion to create maps that emergency service vehicles can use to navigate Tokyo immediately following an earthquake.

One of the most recent studies related to stranded persons was done by a group of researchers from the Tokyo Metropolitan University, who published a report in the Journal of JSCE in 2013 titled, “How stranded commuters in Tokyo returned home after the Great East Japan Earthquake: Analysis of the situation on Twitter.” Using tweets from some of Japan’s more than 10 million Twitter users, researchers were able to create data about what motivated people to return home by extracting keywords and geotags. The main reason people wanted to get back to their houses and apartments? Family members or, as this report highlights, pets.