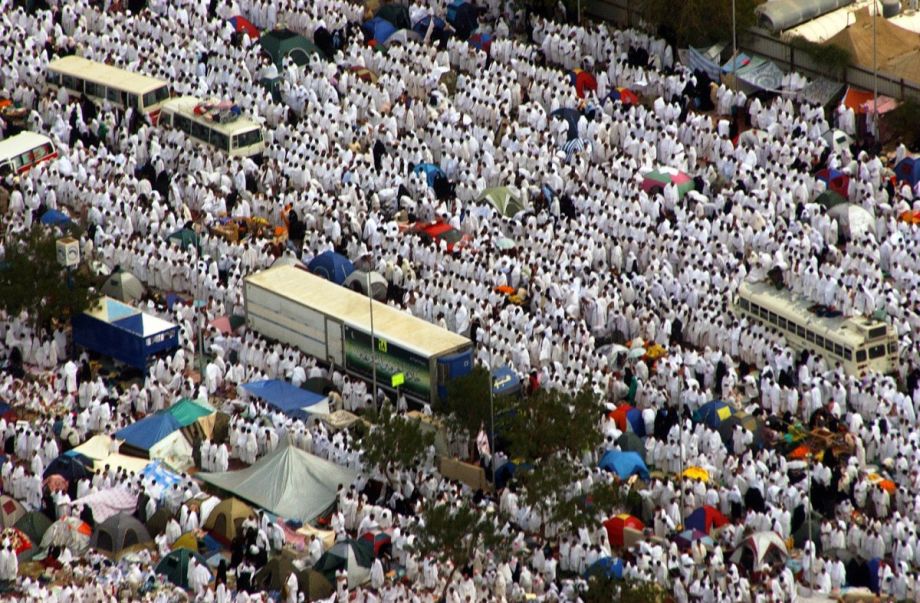 Traffic stopped for mid-day prayers during the Hajj in Arafat, Saudi Arabia

Hajj Metro Prepares for its Annual Run in Mecca

Metro Report International reports that crews from Malaysia are now in Mecca, performing the tests and inspections needed to get the world’s biggest special-event metro service ready for its one-week operating run.

Crews from Express Rail Link, which operates the airport shuttles in the Malaysian capital of Kuala Lumpur, are currently performing the inspections and test runs to make sure the Al Mashaaer Al Mugaddassah Metro in Mecca is ready to transport more than half a million pilgrims each day of the Hajj, the week-long pilgrimage season that takes place each summer. All Muslims are expected to make the pilgrimage to Mecca at least once in their lives; this year, the Hajj takes place from Aug. 19 through Aug. 24.

The Hajj metro opened for its initial run in 2010 and was built to help ease the total gridlock the arrival of millions of pilgrims in Mecca each summer produces. Traveling to the holy sites in Arafat and Mina can take up to eight hours by bus or car on the region’s congested roads; by contrast, the 18-km (11.2-mile) metro moves up to 72,000 passengers per hour among the sites in just one hour.

“This intense demand for mass transportation does not exist in any other parts of the world,” Express Rail Link Chief Executive Officer Noormah Mohd Noor told MRI. “Every single pilgrim must be transported and vacated from Arafat within six to eight hours.”

The Malaysian firm has provided the operating staff, which itself must be Muslim, for the Hajj metro since 2012. From 2010 to 2014, and again this year, China Railway Construction Corp. held the contract to run the metro; for the 2015, 2016 and 2017 seasons, Malaysia’s public transport operator, Prasarana, held the contract.

The International Railway Journal reports that the regional organization formed to build a light rail line connecting Nuremberg with the nearby cities of Erlangen and Herzogenaurach awarded a planning contract for what will be Germany’s longest tram line in late June.

Zweckverband Stadt-Umland-Bahn, the organization formed to build the line, awarded the contract to a consortium of consulting firms consisting of Gauff Rail Engineering, Rambøll and Obermeyer Planen & Beraten. The contract covers work necessary for the line to receive final planning approval in 2021.

The 25-kilometer (15.5-mile) line will extend Line 4 of the existing Nuremberg tram line westward to serve Erlangen and Herzogenaurach. A companion extension to the east from Nuremberg got dropped when residents of the area it was to serve voted against funding it in 2015.

Train geeks and rail buffs all over the world devote time and effort to producing fantasy maps of the transit systems they think their home cities (or others) ought to have. One such map, from a graphic designer from Columbus, Ohio, has gotten people in the Ohio capital talking about what it might mean for the city if it or something like it became reality, according to a Columbus Dispatch feature on the daydream.

The reason? As its creator, Columbus-born graphic designer Michael Tyznik notes on his site, Columbus is now the largest city in the United States without rail transit of any kind. He has been toying with the idea of a light-rail rapid transit system for the city for a few years now; the map he posted on a Reddit discussion board July 22 was his fourth revision (and his first in seven years) and took into account a new bus rapid transit line the Central Ohio Transportation Authority has already placed in service.

Reaction to the post on Reddit was swift and enthusiastic; 600 people upvoted it and 200 commented on it. A subsequent Tweet of the map got more than 320 retweets and 1,200 likes.

Tyznik himself, who lives in New York now, points out that his map doesn’t reflect what’s actually needed or feasible for the city to undertake; he produced it mainly out of his interest in graphic design. But, he added, “I do think it’s cool that it gets people excited about transit.”

Jennifer Noll, a planner with the Mid-Ohio Regional Planning Commission, agreed with Tyznik that the response to the map showed a deep interest among Columbus residents in their city’s transportation future. “That’s always a good thing,” she says. As for what the map depicts, she said that it was too early to tell whether it’s actually feasible. (Tyznik himself said it wasn’t meant to be submitted for official consideration.) The MORPC is currently conducting a year-long study on the region’s future transportation needs.