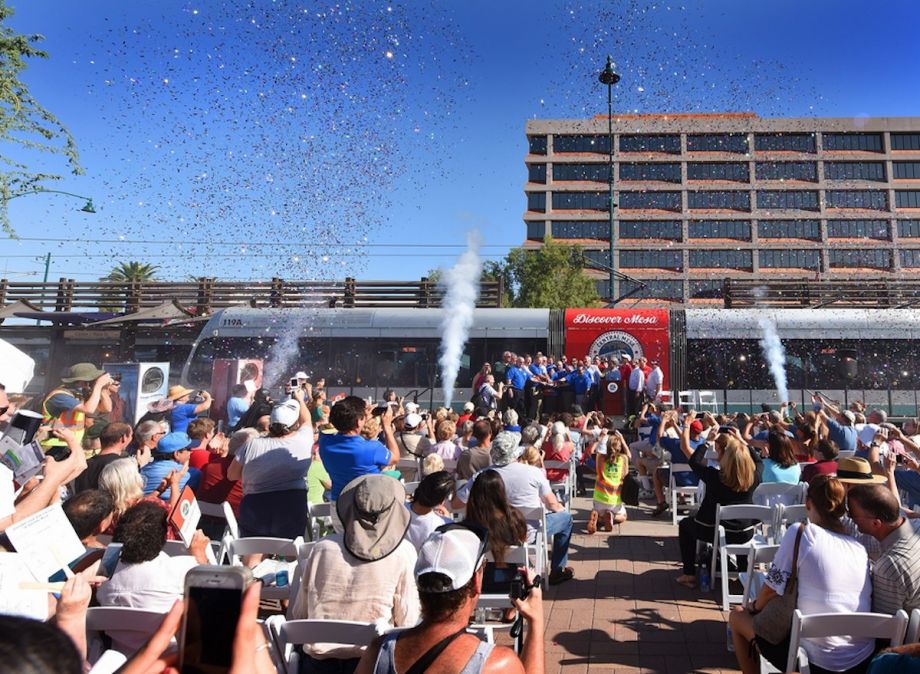 The Arizona Republic reports that the 3.1-mile LRT extension into central Mesa, begun in the summer of 2012, was completed seven months ahead of schedule, further cause for celebration.

Mesa Mayor John Giles, addressing the crowd gathered in front of the Mesa Community Arts Center for the formal ribbon-cutting, called the opening “one of the biggest and best days in the history of Mesa” and predicted that the LRT line would transform the city center into a “great living room” that would draw visitors from all over metro Phoenix.

The opening had more than a touch of Disney about it: Giles and other Mesa officials formally opened the ceremonial train by pressing a large “magic” button that opened the train doors while showering the crowd with glittering confetti, and the news story described “lines that rivaled Disneyland attractions” forming at each of the new extension’s three stations.

The extension is projected to add 5,000 riders a day to the Valley Metro LRT system. Several area residents quoted in the story welcomed the extension, saying it would make it easier for them to get to other areas of Phoenix as well as discover what downtown Mesa and the East Valley have to offer.

Downtown Mesa is not the final terminus for this extension: The line will be extended two miles further east by 2018.

Victoria Line Upgrade Reaches Halfway Point
The London Underground has reached the halfway point in its project to bring one of its busiest routes into the 21st century, according to an article in the International Railway Journal. 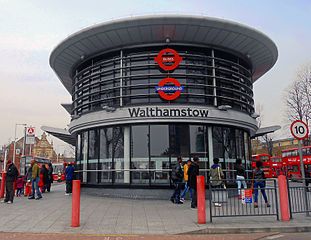 The London Underground crossovers at Walthamstow Central must be rebuilt. (Photo by Duncan)

The project to install communications-based train control (CBTC) and automatic train operation (ATO) on the Victoria Line will allow that route to handle 36 trains per hour in each direction. But to achieve this throughput, the 50-year-old crossovers at Walthamstow Central, the line’s northern terminus, must be rebuilt, for their design permits only 24 trains an hour to operate through them.

To perform this work expeditiously, LU has closed the Victoria Line’s northernmost section, from Seven Sisters to Walthamstow Central, for 23 days through August 30th.

“The Victoria Line now carries a record 200 million passengers each year and demand is rising,” David Waboso, London Underground’s capital programs director, told the IRJ. “This is one of the biggest single closures we’ve undertaken on the Tube network in over a decade. The outcome will enable us to deliver a 40 percent capacity boost for customers northeast of Seven Sisters. We’ve carefully timed our program schedule down to the last hour, and our engineers are working around the clock to keep the closure period as short as possible.”

Malaysian Resort Goes to Work Implementing Transit Master Plan
The government of the state of Penang, which includes the resort city in northern Malaysia, has selected the firm that will turn its Transport Master Plan (TMP) into reality.

According to an International Railway Journal news report, the SRS Consortium will be the delivery partner for the government’s 27-billion-ringgit ($6.48 billion U.S.) transport master plan, which will create a network of light rail, tram, bus and ferry routes along with new highways. The goal of the plan is to relieve traffic congestion in the region, especially on Penang Island.

The rail component of the plan includes five light-rail and two tram lines on Penang Island and two regional rail lines on the mainland. The consortium will be responsible for engineering studies and designs, gathering public feedback, and gaining the necessary state and federal approvals for each component of the plan.

Currently, only 3 percent of commuters in Penang use public buses for the morning commute, and another 8 percent use factory or school buses. The TMP seeks to increase public transport’s share of commuter traffic to 40 percent by 2030.